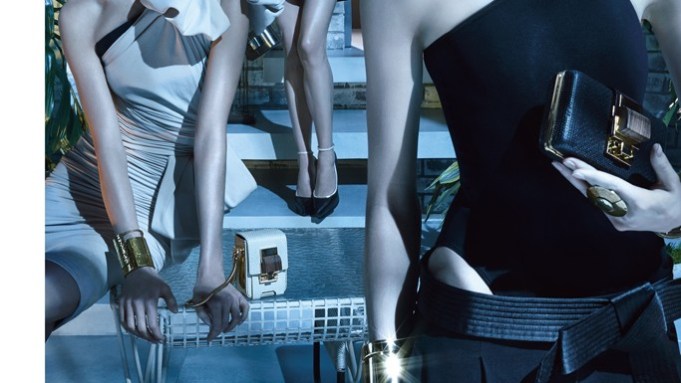 THE SKYPE’S THE LIMIT: Lanvin’s dreamy video for its spring campaign shows models preening in a leafy courtyard when, suddenly, a Skype window pops up — and it’s Alber Elbaz calling. “I’m so sorry I couldn’t make it. It’s like being in New York without flying,” he marvels from his design studio in Paris, oohing and aahing over the lighting, the makeup, the bags. “There is something very California about the whole campaign,” he muses.

Turns out Lanvin’s creative director could not be on Steven Meisel’s set in New York on the day of the advertising shoot, with Hurricane Sandy and a logjam of fittings among the factors keeping him in France.

No matter. He was able to help direct the action as models Karlie Kloss, Saskia de Brauw and Daria Strokous mingle in each photo, wearing dresses with Sixties airs and clutching an array of handbags for day and evening. Creative direction for the spring campaign was by House + Holme’s Ronnie Cooke Newhouse and Stephen Wolstenholme.

The print ads are slated to break next month in a range of magazines, with media spending on the rise in Asia in tandem with Lanvin’s retail expansion. The video, titled “I Wish I Was There,” is to break soon on Lanvin’s Web site, Facebook page and YouTube channel.