While much of the discussion concentrated on business topics, Kelly Osbourne, Drew Barrymore and Betsey Johnson provided some girl power moments. 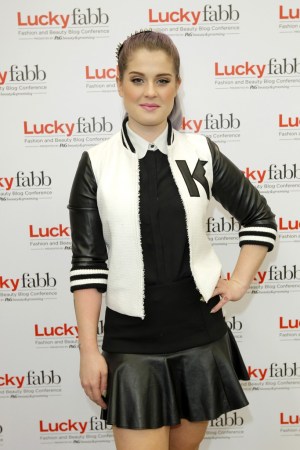 THE SOCIAL WORLD: As social media matures and splinters, presenters and attendees at the second West Coast edition of Lucky Magazine’s Fashion and Beauty Blog Conference, held Thursday and Friday at the SLS Beverly Hills hotel, were grappling with how to leverage it most effectively.

Brand marketers at the conference, which was sponsored by P&G Beauty and Grooming, said realistic approaches to communicating with their audiences through digital media is critical. In its Styld.by initiative featuring bloggers wearing Gap merchandise, Jamie Gersch, senior director of marketing at Gap North America, for instance, noted the bloggers pair Gap clothes with clothes from other brands.

“It took us a really long time to get to the place to convince the organization that no one is going to wear one brand,” she said, explaining that wearing one brand is “not how anyone dresses, let alone a new Millennial customer.” By mixing brands, Gersch continued, “You really see the breadth of what we are doing and how our product exists in the real world in a really authentic way.”

At Sephora, director of social media Cathy Choi said the retailer’s digital presentation is incorporating more information geared toward “the everyday girl” rather than the high-fashion, highly curated tactic that it has typically employed. Sephora is also enhancing its video content to demonstrate how beauty products are used in contexts familiar to “the everyday girl.” “Video just brings this richer level of depth of how to apply makeup,” said Choi.

The conference touched upon not simply the importance of how content is conveyed but the importance of where it is done. In particular, Instagram was viewed as a powerful social media platform. Geri Hirsch, who blogs at Because I’m Addicted, said, “The real estate of a strong Instagram handle now is just as strong as the real estate of a strong URL.”

Alex Kassan, director of investments at Advance Publications, said it is essential today to have a multichannel presence, but the social media dynamics are quickly changing. “The relative importance of any of these channels is still being defined. It’s important to have a presence on Instagram,” he said, adding, “You could argue that it is an easier way to build an audience. It is an easier way to demonstrate engagement…As a monetization channel, [it] is completely undefined at this point.”

For brands seeking to partner with online content makers, no matter the social media vehicle, the focus on metrics such as Facebook likes and Twitter followers is certainly strong, although it may be slipping a bit. Speaking of luxury brands, James Nord, cofounder of blogger directory Fohr Card, said, “They care about numbers and they care about followers, obviously, and they care about engagement, but it is definitely secondary to the work and that’s something I’m seeing that’s different than a couple of years ago.”

While much of the discussion at the conference concentrated on business topics, Kelly Osbourne, Drew Barrymore and Betsey Johnson provided some girl power moments. Osbourne, who instructed the attendees to dress for themselves and nobody else, acknowledged she hasn’t always been a fashion industry darling. “Earlier on, there were designers who, when I asked to borrow their clothes, would say, ‘She’s not really on brand.’ And that’s code for, ‘She’s too fat and won’t fit our sample sizes,’” she said. “But there have been designers that have always been there for me, and I really stick by them. Now, I won’t wear those other designers.”

Barrymore weighed in on cultural conversation stirred up by Sheryl Sandberg and Anne-Marie Slaughter about whether women can have it all. “I don’t think you can,” said Barrymore. She elaborated, “You have to choose your battles, definitely. I can’t direct movies right now. I would miss out on my daughter. It was a clear choice.…I just had to make it.”