The Story Behind Graff’s Diamonds

Laurence Graff may hail from London's East End, but his personal story could easily be the telling of the American dream. 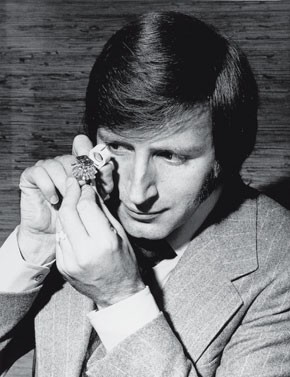 LONDON — Laurence Graff may hail from London’s East End, but his personal story could easily be the telling of the American dream.

Author Meredith Etherington-Smith, who’s just penned the first book on Graff, doesn’t exactly mince words as she breathlessly describes the 68-year-old jeweler’s professional journey. “A glittering fable of our times: A fabulous transition from humble beginnings to the King of Diamonds,” she writes in the new book, “The Most Fabulous Jewels in the World” (Cultureshock Media).

The glossy, coffee-table book, out this month, traces the history of the self-made Graff and his London-based diamond empire, his long-standing relationship with clients such as the Sultan of Brunei, and the one-off sparklers he’s owned and loved.

Those rocks include the Idol’s Eye, a 70.21-carat light blue diamond from the collection of Abdul Hamid II, the 34th Ottoman Sultan, and the Deepdene Diamond, a 104.52-carat fancy golden-yellow stone that Graff originally bought for $700,000 and later sold to novelist Danielle Steele.

In 1987, he purchased the Windsor Yellow Diamonds, which once belonged to Wallis Simpson, at auction, as well as Simpson’s 19-carat emerald engagement ring, which Graff gave to his wife, Anne-Marie, for their 25th wedding anniversary.

“He has a psychic relationship with diamonds,” said Etherington-Smith during an interview at the Graff headquarters on Albemarle Street. “From his very early life, he’s had a remarkable sense of observation, of places, of details. For Graff, it’s always about the client.”

Graff, who is also a major contemporary art collector and whose London headquarters could rival any of the city’s galleries, said he’s always wanted a book.

“Even some years ago I thought we should have a book because I had a story to tell,” he said. “But now there is a bigger story to tell — about our jewels, our stores, our workshops and craftsmanship.”

All proceeds from the book’s sale will go to the Nelson Mandela Children’s Fund, which promotes the rights of children and youths in South Africa.

This story first appeared in the October 22, 2007 issue of WWD. Subscribe Today.

“I used to carry diamonds around in my pocket,” he told W Magazine, WWD’s sister publication, last year. “The power of the diamond got me very early. They sent a message back to me that I could use them to create jewelry.”

In the Seventies, he began traveling to places like Australia, Singapore and Tahiti with a suitcase full of diamond ring samples, and cabling his orders back to London. During those years, he built up a network of contacts, including the wife of the Crown Prince of Brunei, who would eventually form his client base.

Today, Graff presides over one of the biggest high-end jewelry brands, is known as the “king of diamonds,” and specializes in polishing, cutting and designing clear and colored megarocks, most of which are between 3 and 15 carats.

A relative newcomer to the branded diamond business compared with Tiffany & Co., Harry Winston or Cartier, Graff opened his first major store in Knightsbridge in 1974. There are now 25 stores worldwide with corporate offices in London, New York and Geneva.

He was also the first big retailer to rely on the allure of the rocks themselves and has never been shy about cramming his windows full of giant sparklers.

Etherington-Smith, editor in chief of Christie’s Magazine whose previous works include biographies of Salvador Dali and Axel Vervoordt, said she hopes her latest effort will be a resource for professional diamantaires, a book of record for the industry and a joy to read for the diamond-mad.

Although she may have examined a lot of expensive sparklers during her research, Etherington-Smith said it was Graff’s personality that was most intriguing.

“He has a remarkable consistency of vision not only for his designs, but for the advertising, the stores, his long-standing clients and the preservation of the brand,” she added. “It’s very black and white. Sometimes, he’ll say ‘No, no, that’s just not Graff.'”