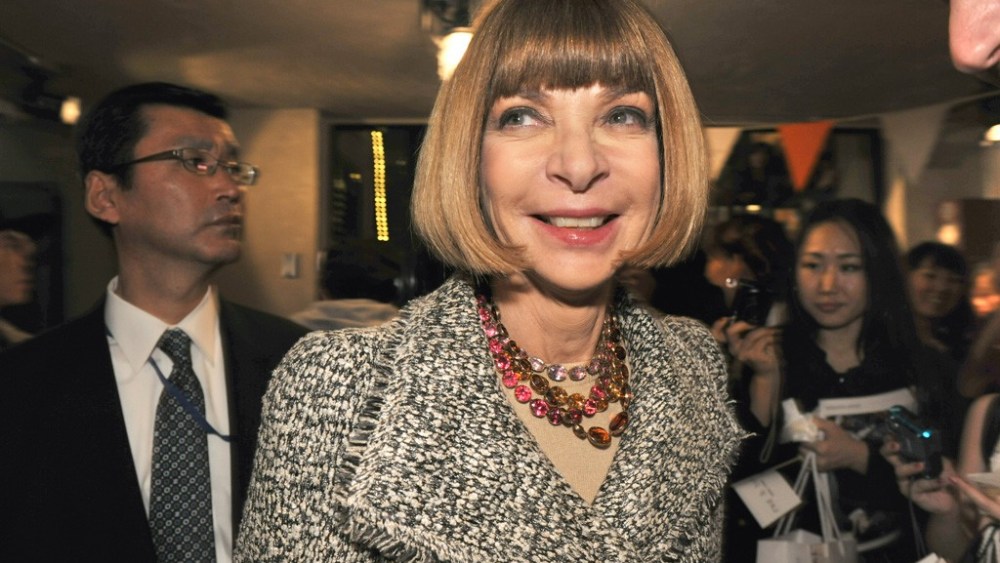 NEW YORK — Graydon, Anna and David have their other projects, of course. Graydon Carter, editor in chief of Vanity Fair, has two restaurants, an illustrated children’s book and movie producer credits. Anna Wintour, Vogue editor in chief since 1988, has her three-year-old Fashion’s Nights Out and her fund-raisers for President Obama. New Yorker editor David Remnick is on the board of trustees for The New York Public Library, often writes for his magazine and has his own interest in Obama — his book on the President, “The Bridge: The Life and Rise of Barack Obama,” was released last year.

For the last few years, these three have been targets of some whispered criticism in the media world: How much time do they actually devote to editing their magazines anymore? Are these editors, a combined 55 years into their jobs, starting to get a little bored? Are their best days behind them?

Apparently not. The three are having career years — or at least years that should go down as All-Star seasons on their Hall of Fame plaques. There’s Wintour, who, despite every trend for fashion titles, has proven that her print version of Vogue still has plenty left in the tank. There’s Carter’s Vanity Fair, which, despite slimmer issues, will have its most profitable year ever in 2011. And then there’s Remnick, whose 86-year-old magazine is Condé Nast’s leading force in tablets, a space that the publishing company is placing a big bet on.

In the last two years, as titles have closed and budgets have been slashed, Condé Nast has lost some of its shine, but these three have apparently lost little momentum.

Let’s start with Wintour’s Vogue. Selling a fashion magazine is a bleak business these days. Every major fashion title that does real business at the newsstand is undergoing some degree of crisis. There are double-digit newsstand losses wherever one looks. Glamour, a cash cow for Condé for years, is down a whopping 17 percent through October. Elle, Marie Claire, InStyle and Harper’s Bazaar are, likewise, all down in the double digits, ranging from 10 to 14 percent, according to data available from the Audit Bureau of Circulations.

And then there’s Vogue. The title is up 7 percent through September. That’s roughly 17 percentage points better than the nearest competitor. The magazine was aided by a March Lady Gaga cover but, still, six of its nine covers have sold better this year, according to the ABC (only Harper’s Bazaar comes closest, having sold better for three of its first seven covers through August. Elle, Vogue’s supposed rival for the last few years, meanwhile, is 0-for-8 through August). This isn’t simply because Vogue had a disastrous year last year — it was down 5.5 percent in 2010 compared with 2009, a clip that its competitors would be happy to claim as their own in 2011.

Wintour’s Houdini trick on the newsstand isn’t the magazine’s only success. Behind publisher Susan Plagemann, it is up in advertising by 8 percent through the first three-quarters of the year, the biggest increase among all competitors, which leaves Vogue with the highest ad page total of any fashion magazine.

It certainly doesn’t have to go like this. Wintour’s predecessors — Diana Vreeland and Grace Mirabella — were both unceremoniously sacked by Condé Nast chairman S.I. Newhouse Jr. when the magazine’s sales began to sag, even though both editors had become legends in their own rights (Mirabella found out the news of her firing from a Liz Smith gossip report on Channel 4’s “Live at Five”).

Carter’s Vanity Fair is, likewise, enjoying a surprisingly strong financial year. Even though the magazine will finish the year up 3 percent in ad pages, and its 2011 total of 1,475 pages is a far cry from what the title was achieving just a few years ago, it will bring home all-time record profitability, said a Vanity Fair spokeswoman.

“I think we’ve had a tremendous year, we’ve made a number of new hires and, in terms of advertising, there were periods in which we had more pages, but we just weren’t as profitable,” said Carter, adding that “2008 taught us how to put out the magazine with fewer excesses.”

That was the first year that Condé Nast, like the rest of the media world, finally got tripped up and had to slash 5 percent from its budgets — the next year, McKinsey & Co. consultants came into 4 Times Square and hundreds were laid off.

There’s also an indication that the magazine will get a freshening up: Carter poached Chris Dixon from New York Magazine to become his new design director, the first time in 18 years that Vanity Fair will have a new creative force.

Also bolstering its look, The New Yorker has hired Wyatt Mitchell, the number two in Condé Nast’s tablet design department, to become its first creative director. Mitchell said there are some areas of the print magazine that “need some refreshing” and that will be his first task.

He was also responsible, in part, for The New Yorker’s success on the iPad. Condé Nast has placed an awfully big bet on the tablets in terms of money, people’s time and energy. And if it weren’t for The New Yorker, the publishing company would have an awful lot less to brag about. The New Yorker has a digital circulation of about 210,000, which counts for more than a third of Condé Nast’s entire digital circulation of roughly 600,000 readers. Also, The New Yorker now has 33,502 subscriptions for the iPad, which leads the company, one insider said (and it certainly leads by a wide mile in terms of revenue — subscriptions are sold at $59.99 a year or $5.99 a month; all other titles are sold at much lower price points).

WWD is unit of Fairchild Fashion Media, which is owned by Condé Nast.

One could easily make the argument of: So what? These are legacy titles. The New Yorker, no matter who is editing it, would do extremely well on the iPad. Vogue and Vanity Fair are strong enough titles that they, too, would have plenty of success if someone else came in and ran them.

“Sure, it’s helpful to have a magazine called Vanity Fair or The New Yorker rather than some obscure publication,” said Wintour. “But it’s what the editor makes it. That’s why we’ve all been so fortunate to work for S.I. Newhouse. He understands that and he has such respect for the editors in chief and he believes those are the ones who need to lead the publication rather than any, I don’t know, market research or anything like that.”

The power of the editors is an argument that all three signed up for.

“The history of magazines or even the history of business or just about anything else is filled with examples of institutions or publications you might have thought were eternal,” said Remnick. “But just as it’s possible to make a lot of daring or correct decisions or have talented people at the head of them, you also have the flip side — you have institutions that run out of gas or make terribly ill-advised decisions and they go in the opposite direction. There are no guarantees. The New Yorker was created by two really radically different editors, but over time they created a fantastic foundation. If you suddenly chip away at its notions of accuracy or fairness or do not take present and future technology seriously, you could do tremendous damage very quickly.”

At a moment for magazines when the bottom line is everything, and gesturing toward the future is so significant, all three can point to a victory — successes that suggest that they are doing something greater than maintaining the status quo. And all three editors said, explicitly or not, that’s because of who’s in charge of them.

“You look at the brands that have longevity and nearly always — in whatever business you’re talking about — there’s a dominant force behind them,” said Wintour. “I totally believe — and I’m sure Graydon and David believe this, too — in a benevolent dictatorship, because you have to have a vision, as they both do, and not worry what’s happening to the left or the right of you.”