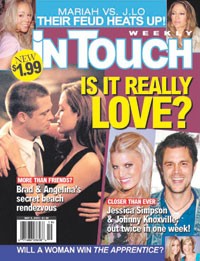 NEW YORK — Charge less for something and you will sell more units.

That’s hardly a revolutionary concept in business, but for some reason it has fired the imaginations of publishers in a big way in recent months. Time Inc. and Hachette Filipacchi Media introduced new women’s service magazines last fall, All You and For Me, priced at $1.47 and $1.45, respectively. Hearst and Gruner + Jahr have their own low-priced women’s titles in development. And two new celebrity-focused titles, TV Guide’s Inside TV and American Media’s Celebrity Living, made their debuts last week, both priced at less than $2. Even in the copycat world of magazine publishing, this constitutes an extraordinary example of flock mentality.

What’s behind this sudden explosion of cheap reads?

The answer begins with Bauer Publishing, the Englewood Cliffs, N.J.-based publisher of magazines such as Woman’s World, First For Women and Twist. In October 2002, Bauer launched In Touch. A weekly celebrity gossip magazine, it offered little readers couldn’t find in People or Us Weekly — except a cover price of $1.99, versus $3.29 for its competitors. Within two years, In Touch had amassed an average circulation of more than 1 million, 97 percent of it coming through single-copy sales, according to Bauer vice president Mark Pasetsky. (People still sells about 50 percent more copies on the newsstand, while Us and Star both lead In Touch in total circulation, thanks to larger subscriber bases.) Meanwhile, Woman’s World, which costs $1.49, sells more units a week than any other U.S. title.

“Any other company that’s smart would look at what this company is doing and try to emulate that in some way,” said Pasetsky.

But Bauer’s strategy wouldn’t have been nearly so effective had other publishers not set the stage for it with aggressive price hikes. In 1994, Family Circle and Woman’s Day both cost 99 cents on the newsstand. By 2004, they were selling at $2.50. Moreover, the average cover price of audited magazines went from $2.80 in 2000 to $3.40 in 2004 — an increase of 21.4 percent. According to circulation analyst John Harrington, by last year, “Bauer was the only one that still had magazines under $2, and most of them were doing well. Some of the other publishers took a look and said, ‘We may have pushed by this price barrier too quickly.’”

It’s clear from the soaring circulation of In Touch and its new sister title, Life & Style Weekly, that Bauer’s strategy has been working for them. It’s less clear whether, and how, it will work for other publishers, some of whom have very different cost structures and rely on newsstand revenue to partially offset losses incurred from subscription marketing. “It’s not the answer for everyone,” said Pasetsky. “I would wonder, are the companies that are based on subscriptions — are they set up to actually support a lower newsstand price?”

Time Inc.’s thinking in setting the All You price at $1.47 is to make it attractive to women who weren’t previously buying magazines, said Steve Sachs, vice president of consumer marketing for the People Group. “These lower-price magazines are attracting a new and different audience to the category,” said Sachs.

“It’s not a huge, considered purchase,” added All You’s publisher Diane Oshin. “It’s affordable enough that it just goes in the basket.”

It’s no coincidence that All You is currently distributed exclusively through Wal-Mart, a growing force in magazines that currently accounts for roughly 12 percent of all single-copy sales. John Hartig, Hearst’s senior vice president of consumer marketing, believes the retailer “has trained everybody to be an everyday low-price shopper. It’s cool to be shopping for deals.”

But consumer sensitivity to cover price is hardly an iron law; rather, it seems to vary from one situation to the next. In the celebrity weekly category, it is by no means the primary factor driving buying decisions, said Pasetsky. “A lot of it comes down to the cover story. The loyalty is to the person we’re featuring, not to the magazine.” Certainly, People, despite competing directly or indirectly with several low-price weeklies, doesn’t seem to be suffering from price pressure: Despite an increase in price, to $3.49 from $3.29, it still posted a 1.7 percent increase in average newsstand sales, to 1.5 million, in second-half 2004.

Meanwhile, in the teen category, publishers are still figuring out what an extra 50 cents or a dollar means to their readers. Elle Girl lowered its price to $1.99 from $2.99 at the end of 2004, apparently to better compete with Teen Vogue. The latter, however, is raising its cover price to $2.50 from $1.99 as of its June-July issue — despite a 29.8 percent drop in newsstand sales in the second half of last year to 233,875. “The issue is [that] we have overdelivered in terms of total bonus circulation,” including subscriptions, said Teen Vogue publisher Gina Sanders.

Price pressure from the teen titles appears to have contributed to Jane magazine’s decision to cut its price to $1.99 from $3.50 in January, only six months after increasing it to $3.50 from $2.99. Jane’s publisher at the time, Eva Dillon, said the idea was to encourage sampling of the magazine, thereby driving up subscription sales, and, ultimately, ad revenue. (Jane and Teen Vogue are both units of Advance Publications Inc., parent of WWD.)

Hearst has been conducting its own price experiment with Shop Etc., selling the new shopping magazine at $1.99, $2.99 and $3.49 in different parts of the country. “I’m very encouraged to tell you that price is not an issue at this magazine,” Hartig claimed. “It’s selling as well or better at $3.49 than it is at $1.99.”

Several publishers argued that the merits of higher cover prices go beyond the extra revenues they generate. “If you sell your product at 30 or 50 percent less than everyone else, you will entice a certain number of consumers based on price, sure,” said Seventeen publisher Jayne Jamison. “But, ultimately, I don’t think it’s something that will reinforce brand equity. You can’t build a brand by discounting.”

Even Sachs, whose company publishes All You, agreed: “Price is not only what’s charged. It’s also a signal about the quality of the product.”

Moreover, some advertisers regard it as an indicator of the reader’s affluence. While publishers of expensive magazines understandably encourage this thinking, the correlation between a magazine’s cover price and the wealth of its readers, while real, is not especially strong. According to MRI, readers of Better Homes & Gardens, which sells for $3.50, have a median household income of $58,500, compared with $54,500 for First For Women, which costs $1.99.

Russell Denson, chief executive of Gruner + Jahr, believes price is, at bottom, “a function of the product you’re selling.” He divides the new crop of women’s magazines into two groups: “quieter magazines” — titles such as Real Simple and O, The Oprah Magazine, which can afford to charge a premium price — and “quicker magazines” — titles like All You, For Me and, presumably, whatever low-price offering G+J is incubating. “With these ‘quicker’ magazines, you get it, you look at it, you throw it away,” he said. “It’s akin to the disposable razor. That’s sort of the implication of them. Nobody gets The New Yorker and throws it away.”