The Unknown Hipster Gets Famous

Jean-Philippe Delhomme, the illustrator best known for his advertising campaigns for Barneys New York, is turning his blog into a book. 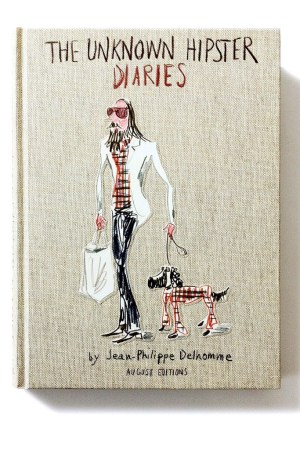 WELL-KNOWN HIPSTER: Jean-Philippe Delhomme, the French illustrator best known for his advertising campaigns for Barneys New York and illustrations appearing in American GQ, is turning his blog, The Unknown Hipster, into a book.

On the site he launched in 2009, Delhomme posts colorful drawings recounting the adventures of a fictional character dubbed the Unknown Hipster, who has crashed François Pinault’s art party in Venice, communed with Marina Abramovic at the MoMA and attended the Occupy Wall Street protests.

Published by New York-based new imprint, August Editions, “The Unknown Hipster Diaries” is out this month in a limited edition of 1,000 copies.

Illustrations are to be exhibited at Colette in Paris in December, with a book signing event set for Dec. 15. Another event will be held on Nov. 15 at Bookmarc in New York, where the book will also be available for sale. It will retail at 39 euros in France and $45 in the U.S.