WWD's week in quotes, culled from stories that ran the week of January 27 to January 31. 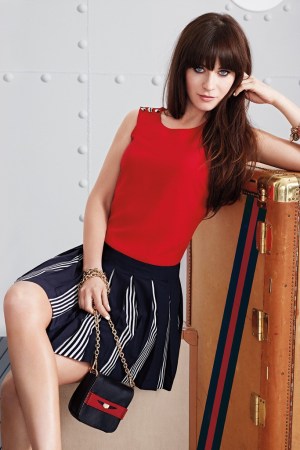 WWD’s week in quotes, culled from stories that ran the week of January 27 to January 31.

• “Tommy and I share many of the same inspirations — old-school music, classic films and old Hollywood icons — and his guidance during the design process helped to put a really unique twist on each piece,” — Zooey Deschanel on her collaboration with Tommy Hilfiger.

• “She reminds me of Audrey Hepburn for her sense of humor, her sophistication,” — Tommy Hilfiger on Zooey Deschanel.

• “And it’s disturbing when you see heads start to roll at good companies in any case.” — retail analyst Janet Kloppenburg, president of JJK Research.

• “No disrespect to Thanksgiving, but the Super Bowl is the greatest eating holiday of the year,” — Bon Appétit editor in chief Adam Rapoport.

• “Of course, I would prefer to see more individuality on the red carpet. I hope Schiaparelli, very humbly, could be a different choice,” — Marco Zanini on awards season.

• “There’s something personal about getting up close. And the minute it gets to a runway, you’re tempted to do some high jinks. I don’t want to show something I won’t produce. I want people to wear the clothes I show.” — Michael Kors on opting not to stage a runway show for his menswear collection.

• “When I was younger, a long time ago, I always wore some sort of cologne or aftershave, and I don’t anymore. Although I’m sure you have some good suggestions. Really, I don’t think about it. I just try to be hygienic. I’m more worried about picking the right kind of toothpaste,” — Bill Clinton at the Fragrance Foundation talk.

• “I jogged 25 miles a week till they stopped me when I was President — I think they were afraid someone was going to shoot me after I banned assault weapons,” — Bill Clinton on why the Secret Service made him stop jogging.

• “It’s challenging to have two jobs — a 24-hour day job and night job. It felt like it was the right time to take that next step and do something really different from my brand. It has a different look and shows my range as a designer.”— Jason Wu on Hugo Boss.

• “As we were leaving, I met Beyoncé. She’s totally my hero, and she was so nice to me, I’m still shaking. I’m surprised I’m not in tears right now.” — Anna Kendrick at a post-Grammy’s party.

• “It’s hard to do because I’m not used to doing so many things with my hands, especially at a function. I’ve already spilled my Champagne.” — Cindy Sherman on Instagramming while partying.

• “Cyber criminals are persistent and their methods of attack are increasingly sophisticated.” — Sandy Kennedy, president of The Retail Industry Leaders Association.

• “I will use the word evolutionary, because if I say revolutionary it will scare people.” — Marigay McKee on the future of Saks Fifth Avenue.

• “Our agents are committed to combating the criminal enterprises selling counterfeit products which undermine our economy and take jobs away from Americans. No good comes from counterfeiting American products regardless of whether they are jerseys, air bags or pharmaceuticals.” — ICE acting director John Sandweg on the recent seize of #21.6M in fake NFL merchandise.