WWD's week in quotes, culled from stories that ran the week of April 7 to April 11. 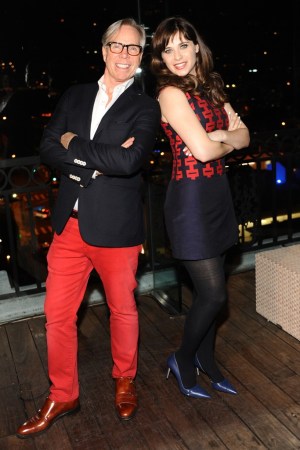 WWD’s week in quotes, culled from stories that ran the week of April 7 to April 11.

“Affordable luxury — these are two words that don’t go together.” — Bernard Arnault, LVMH chairman, on continued commitment to upmarket strategy.

“It was cool to have the opportunity to make clothes that are exactly what I want to wear.” — Zooey Deschanel on her collaboration with Tommy Hilfiger.

“You have to do something with your life and this is what I chose so I’m not going to bitch about it.” — Richard Ford on the writer’s life.

“I’d ride my horse through the neighborhood if I had one, though. If I had a massive horse, I’d ride it.” — New York Knicks’ Amar’e Stoudemire, at the Henry Street Settlement gala. discussing the controversy over horse-drawn carriages in New York City.

“I do believe in putting your money where your mouth is. It’s important for people to have a financial stake in things. It makes people make good investments and make good decisions.” — Glen Senk on partnering with Berkshire Partners.

“They would never have wanted anything that was not legitimate. Designers don’t deal with finance or administration, and they don’t want to know about either one,” — Massimo Dinoia, lawyer for Domenico Dolce and Stefano Gabbana, as tax trial presses on.

“People ask me, what is your business plan; I say it’s not to crumble.” — designer Agatha Ruiz de la Prada at the Spanish Fashion exhibit in Paris.

“They were severely lacking in investment, and were starved of capital. The owners dribbled in money for projects such as the Oxford Street store refurbishment, but there was an overall lack of investment.” — Retail analyst Freddie George of Cantor Fitzgerald Europe Research, on Sanpower’s deal to buy House of Fraser.

“I feel like I should stay with him and take care of him, but I am poor and I have to work. I have no other choice.” — Twenty-two-year-old Semu Begum, a worker at a textile factory in Dhaka, speaking of her two-year-old son.

“There’s over 5,000 Swarovski crystals, seven bottles of the strongest glue ever, 120 hours and there’s a camera in my forehead that’s filming you right now that represents a higher consciousness that’s documenting everything.” — Edmundo Huerta, aka Di Mondo, on the “Enchanted Garden” theme attire at the Save Venice masquerade ball.

“Since my husband passed away, you can’t just sit home and knit.” — Candy Spelling on her latest venture as a producer on Broadway, “After Midnight.”

“This also allows us to accelerate our international development and growth, and it allows us to use the cash flow we generate to invest in Lands’ End.” — Edgar Huber, president and chief executive officer of Land’s End on becoming a public company.

“I have to live for another 20 years because I can’t finish my writing deadlines,” — Gloria Steinem, honored at the DVF Awards, on recently celebrating her 80th birthday.

“I feel a twinge of guilt in receiving this honor. All I’ve done is enjoy myself.” — Vanity Fair’s Graydon Carter, on being inducted into the American Society of Magazine Editors’ Hall of Fame.

“Texas is a tough market. It’s hard to get noticed. People here don’t really know who Belk is. This is our chance to plant our flag.” — Belk chairman and chief executive officer Tim Belk on expansion plans.

“I have a passion for fashion — and fashion is compassion.” — Elie Tahari on key to success.

“I was very surprised to see how calm and quiet I usually am. I had a different picture of myself. I also saw how fast I am in my decisions, which I never really realized.” — Raf Simons on the documentary  ‘Dior and I,’ which captured the preparation of his first collection for the French house.

“Some designers consider themselves artists, such as Alexander McQueen who was a true artist. I am not an artist.” — Tom Ford describing himself as a designer and a businessman.

“This is not going to be the Bobbi Brown Cosmetics channel. I am approaching this as a journalist.” — Bobbi Brown on her appointment as editor in chief of Yahoo’s online beauty magazine.


“Sometimes we don’t need to see them anymore. They just tell us, now I’m 85 kilos, and we know where those extra two — or minus two — have gone.” — Julien de Luca of Camps de Luca, one of Paris’ most coveted addresses for bespoke tailoring.

“I started with stilettos that were superglam, superfeminine and sexy — and the business was a flop. For the first two or three seasons, it was a tragedy.” — Giuseppe Zanotti reflecting on 20 years in business.

“We know we’re most successful when we remain focused on our core. As we look to double the business and continue our international growth, this alignment of apparel categories with the core attributes of Victoria’s Secret and Pink will provide a cohesive brand experience for our customer in stores, online and through our catalogue.” — Sharen Jester Turney, ceo of Victoria’s Secret on trimming its apparel collections.

“I wanted to stretch Ann Taylor a bit. I might say, ‘Let’s do a low-slinging back all the way to your tush,’ but the idea is to design for everyone. So I did things like raise hemlines and show some skin while covering all the right parts.” — Kate Hudson on her five-piece capsule collection of little black dresses with Ann Taylor.