WWD's week in quotes, culled from stories that ran the week of April 28 to May 2. 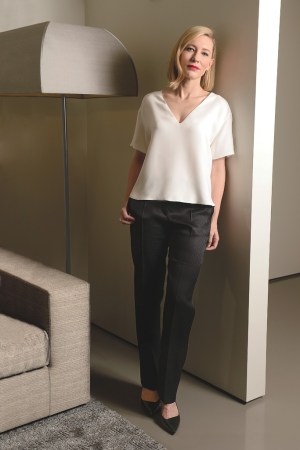 WWD’s week in quotes, culled from stories that ran the week of April 28 to May 2.

“When I first actually met him, he was fitting me for a dress backstage after a Privé show — I think it was the first Privé show. He immediately put me at ease. He got down on the floor and started measuring my hemline. He didn’t have someone else do it, he did it himself. He was there — the great man — literally at my feet. It was a way of saying, in this moment you are the most important person. It was a profoundly generous thing for him to do.” — Cate Blanchett on meeting Giorgio Armani for the first time, the start of a long relationship.

“My beloved Hillary, do not disappoint me. You have to be President, OK?” — Oscar de la Renta to Hillary Clinton at a dinner celebrating his Medal of Excellence from Carnegie Hall.

“Sunglasses are the quick way to achieve glamour. Day-to-day, I usually wear little more than a swipe of red lipstick and a pair of shades.” — Dita Von Teese on her new eyewear line.

“They threatened that those who did not work would be fired and taken out of the factory by police.” — An employee, who requested anonymity, on returning to work after a protest at one of China’s largest shoe factories.

“If fast fashion didn’t exist, we wouldn’t need a summit in Copenhagen.” — Livia Firth, creative director of Eco Age and founder of the Green Carpet Challenge.

“White tie and decorations is the grandest form of social dress. For me, it’s like wearing a guillotine, or having a knife cutting into your throat. I hate it. If you are wearing decorations — such as the Légion d’honneur — you can end up looking like a very uncomfortable Christmas tree.” — Nick Foulkes, the London-based journalist and author, on the “white tie and decorations” dress code for the Costume Institute gala at the Metropolitan Museum of Art on Monday.

“Clearly with the business model operating now, we still believe there is potential in China or we wouldn’t have a site in Mandarin.” — Ginger Reeder, Neiman Marcus Group, addressing the prospect of NMG pulling out of its investment in Asian-based e-commerce site Glamour Sales Holdings.

“Amazon is coming. They’re trying, they’re working on it. Not having stores will be a disadvantage to them in the apparel world. The real fashion customers love to shop.” — Karen Houget, Macy’s Inc.

“Cats using a toilet.” — Buzzfeed editor in chief Ben Smith on the kind of online video that people will watch.

“I love everything in New York. Every single thing. The people. Democracy. White, black, everybody. And the Statue of Liberty, as you can see,” — Fausto Puglisi at an event to launch his line at Bergdorf Goodman.

“We are only here with lotus flowers and the police welcome us with razor wires and fences. It is very threatening.” — Huot Ran, a Cambodian garment worker at a labor demonstration in Phnom Penh.