WWD's week in quotes, culled from stories that ran the week of May 5 to May 9. 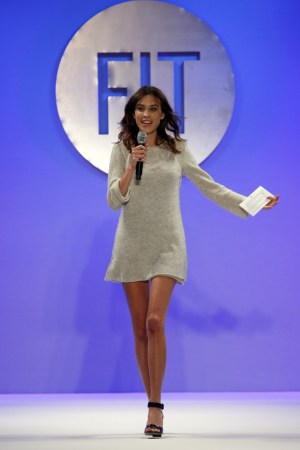 WWD’s week in quotes, culled from stories that ran the week of May 5 to May 9.

“Retail has always been about theater, excitement and fantasy.” — Marigay McKee, president of Saks.

“Please remember when I come to borrow some dresses, I did you this favor.” — Alexa Chung, who hosted “The Future of Fashion” at the Fashion Institute of Technology.

“I know that Anna hates being the center of attention, so this is all probably killing her, but we love it. But the truth is I am here today because of Anna. I am here because I have such respect and admiration for this woman who I am proud to call my friend. And I am here because I am so impressed by Anna’s contribution not just to the fashion industry but to the any causes she shares and cares about, particularly this great American museum.” — First Lady Michelle Obama at The Metropolitan Museum of Art for the unveiling of Anna Wintour Costume Center.

“My wife said I look like a Latin American dictator. I said, ‘That’s what I am.’” — Oscar de la Renta remarking on wearing his decorations including the Légion d’Honneur a special honor he received from the King of Spain.

“This dress code should be mandatory for most events.” — actor Johnny Depp at the Met Gala.

“Most people who read this book will be leagues ahead of where I was when I started Nasty Gal. I hope they will be confident that they can achieve whatever they want.” — Sophia Amoruso, founder and chief executive officer of Nasty Gal, on her new book “#GirlBoss.”

“There is a legitimate disconnect between our financial results and the work we’ve been doing. It’s fair criticism to say, ‘You’re doing all this stuff, and maybe it will work and maybe it won’t, but look at your financials.’” — Sears Holding Corp.’s chairman and chief executive officer Edward Lampert told shareholders.

“I don’t want to sound like greenwashing. It’s not a question of consumption, but rather of consuming differently.…We will get to a time when consumption will be clean.” — Kering’s chairman and chief executive officer François-Henri Pinault on their sustainability efforts.

“We are always weighing possibilities. I have a very restless mind and therefore our company has a restless mind, creatively. There are a number of names we own, that we registered. That’s ongoing. If something strikes our fancy, we register a name.” — J. Crew Group Inc.’s chairman and chief executive Millard “Mickey” Drexler discussing the trademark of the J. Crew Mercantile name.

“It’s a nice kind of ‘recognized.’ I don’t have to deal with, you know, paparazzi on scooters and all that jazz. People ask for a selfie, people ask for a picture, and they leave it at that.” — Michael Kors

“You know what, I spent most of my summers in Brooklyn. All my life, I grew up coming to Brooklyn. My late grandma and my granddad lived in Brooklyn. He still lives here. So I do make it to Brooklyn a bit whether it’s to see the game or to see my family.”” — Rihanna, front row at the Dior Cruise 2015 show in Brooklyn.

“When I arrived, I was so jet-lagged that I fell asleep during the massage, looked out the window and thought that I was in Hong Kong and they changed the skyline. But then I saw the tower and I said: ‘No we’re in Shanghai.’” — Michael Kors arriving in Shanghai.

“She lives in Nepal so we’re separated by thousands of miles, but always find time to speak daily. I like to think I honor Mother’s Day every day of the year.” — Prabal Gurung on celebrating Mother’s Day.

“We continue to joke about [the shoot] because it’s much easier to do something like this with someone you know so well and that you’re intimate with in real life, but on the other hand, it’s also funny to be intimate with your life partner and have people around.” — Christy Turlington Burns on shooting the Calvin Klein Eternity campaign with her husband Ed Burns.