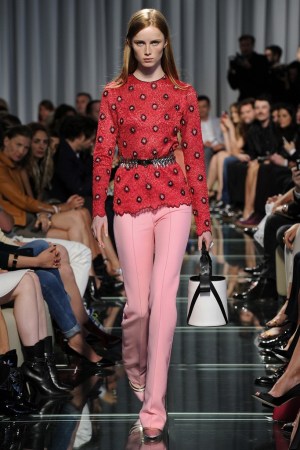 “As a brand, you can talk to the user on a really intimate level. With the exception of direct messaging, this is the most personal you can get from a social platform. Partly because it’s in its infancy, but partly because it’s least polished of any of the platforms from a content standpoint.” — Christian Parkes, Nasty Gal’s vice president of brand marketing, on using Snapchat.

“Once in a lifetime — it’s never to be repeated. You blink, you miss it.” — Michael Burke, chief executive officer of Louis Vuitton, on showing the house’s cruise collection on the square in front of the Prince’s Palace of Monaco.

“The BJP victory is likely to herald a revival in India’s economic fortunes, with the potential to boost Indian GDP growth back over 8 percent by 2017.” — Rajiv Biswas, Asia-Pacific chief economist at IHS Global Insight, on recent elections in India.

“Mainland Chinese visitors coming to Macau stay for two to two-and-a-half days and are in the mood to shop.” — Benjamin Vuchot, region president for Asia North at DFS Group, on the retail outlook in Macau.

“There are certain businesses where there’s expertise outside our company.” — Macy’s CEO Terry J. Lundgren on launching licensed shops like Finish Line on select Macy’s stores.

“I am pleased with today’s ruling and that the court has recognized my rights to creative control and approval over the designs and licenses for my brand. I have worked hard to develop the Rachel Roy brand, and my team and I are eager to continue our focus on design, development and production.” — designer Rachel Roy on the preliminary injunction granted that will allow her lawsuit against The Jones Group to proceed to trial.

“It may have taken us a bit longer to get into Asia, but we’ve been thoughtful about it.” — Alex Bolen, chief executive officer of Oscar de la Renta, as the brand’s runway show that closed the Audi Fashion Festival, one of Singapore’s biggest fashion events.

“We feel that the brand does have the potential to one day achieve $1 billion in sales, but this growth will take time and the right economic conditions.” — Nayla Hayek, chairwoman of the board of Swatch Group and chief executive officer of Harry Winston, on spearheading the expansion effort.

“American art has been a hub of inspiration for me.” — Reed Krakoff at the annual gala at The Phillips Collection where he was honored.

“We were thinking about tornados and how when it’s windy in New York a piece of newspaper will just fly up in your face and how hilarious it would be to have that silhouette in blue gingham.” — Chris Benz on his windswept design that re-imagined costumes to mark the classic film’s 75th anniversary and its “There’s No Place Like Home” initiative for Habitat for Humanity.

“We have things that are Mexican in heart and spirit but are very New York.” — chef Manuel Treviño of new restaurant, Horchata.

“The occupancy rates at shopping centers are well over 90 percent, almost back to where they were before the recession.” — Michael Kerchival, president and chief operating officer of the International Council of Shopping Centers.

“A true hero of fashion. She held no prisoners, and had a voice that all looked to in our industry. [She] inspired and created some of the greatest talents in fashion. No one will ever replace [her] because [she was] a true one off. What a lady.” — Stella McCartney on Louise Wilson, who died at the age of 52.