WWD's week in quotes, culled from stories that ran the week of June 16 to June 20. 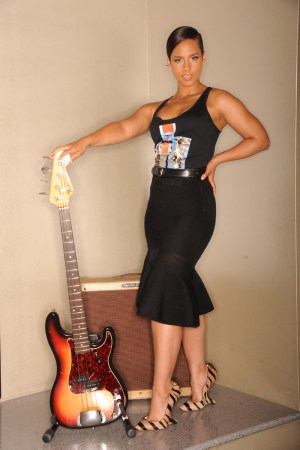 WWD’s week in quotes, culled from stories that ran the week of June 16 to June 20.

“Spiritually we’re a lot alike. The fashion world can make you a little soulless. So when I met him, it was nice to see that he’s really soulful.” — Alicia Keys on Riccardo Tisci.

“Men’s footwear used to be a fraction of the business, now it has become a worthy rival of tailored clothing. It was not just the sneaker. Men are spending more than ever on shoes and apparel.” — Eric Jennings, vice president and men’s fashion director at Saks Fifth Avenue.

“We’re creating an aspirational identity for all of our customers.” — Coach chief executive officer Victor Luis.

“There’s nothing I have to say right now.” — Dov Charney, reached by WWD Thursday after being suspended from American Apparel.

“[Our success is] a proxy for the fact that that is what people want at the very moment they decided, ‘I’m going to get this thing.’” — Steve Yankovich, vice president of innovation and new ventures at Ebay.

“I always wear jeans, but that’s in New Mexico. There’s definitely a bit of Western feel to this because it’s what I wear.” — Tom Ford on his men’s spring collection.

“You know, you hear stories, but to actually come out and meet the guys and the wonderful people that are doing this sort of hits home for us. It’s a week we all look forward to as players.” — Derek Jeter on Yankees Hope Week.

“You immediately see the spirit of the people here — warm, fun, smiling. Coming from the south of Italy, I can strongly relate to this passion for life.” — Frida Giannini on visiting Brazil.

“This is the busiest spring-summer Pitti I’ve been to in a long time.” — Simon Golby, CD Network

“We take no joy in this, but the board felt it was the right thing to do.” — American Apparel board member Allan Mayer on the ousting of ceo Dov Charney.

“I must be the best smelling comedian in America, next to Larry the Cable Guy and David Spade.” — Dana Carvey, on hosting the Fragrance Foundation Awards.

“Part of moving to Rodeo Drive is it’s a more obvious profile and with that comes a certain responsibility not only for what we make but from a visual point of view.” — Vera Wang on relocating her store in L.A.

“If you don’t stand for something, you will fall for anything.” — Bruce Weber, quoting Malcolm X.

“Target has to decide what kind of company it will become. It needs new energy. It’s at a crossroads.” — Amy Koo, Kantar Research

“We are reawakening the dormant couture house.” — Bruno Bensoussan on the revival of the Jean-Louis Scherrer brand.

“I think he was far too complicated of a man to say if he would have liked it. It just honors him.” — James Martin on the new iPad app that gives access to more than 1,000 images by Richard Avedon.

“It’s a very fluid situation so I think the story is still being written. The winner now isn’t the winner in two years.” — Ivan Perez-Armendariz, CP+B on the emergence of mobile technology.

“Uniqlo is one of the fastest-growing retailers in the world and has been growing by double digits. We’re confident we can become dominant in the U.S.” — Larry Meyer, Uniqlo USA

“In the last few years, Italy hasn’t been able to talk about its history, its heritage, its peculiarities, so our mission is to tell people what Italy really is in a completely new way.” — Italian Prime Minister Matteo Renzo, opening this year’s Pitti Uomo.

“The most precious and tangible quality of leadership is trust. It starts with integrity. Right after that, I put intellectual curiosity.” — Michael Gould, addressing students at LIM College.

“We see companies already starting to look into these markets. At this point, it’s the grocers, and you’ll see very quickly that sub-Saharan Africa will become like China was 10 or 15 years ago.” — A.T. Kearney’s Hana Ben-Shabat on Africa as an emerging market.

“They still love me. I guess it’s because I am a simple person and they realize it. In the end, the word spreads that I am kind and friendly.” — Roberto Cavalli, referring to his fans at the Convivio gala in Milan.

“I really want a schedule and a work ethic and to learn something new.” — Lindsay Lohan, on her anticipated stage debut in London’s West End in the fall.