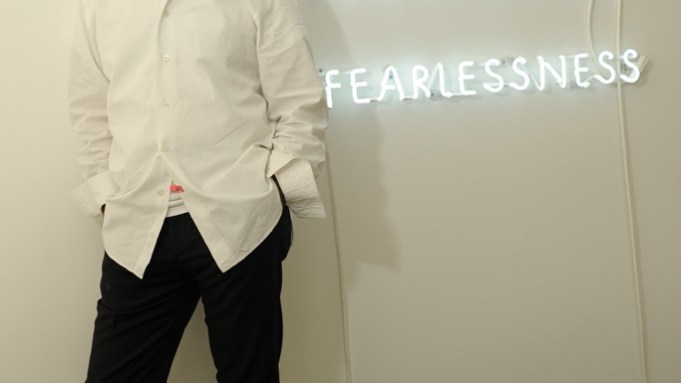 WWD’s week in quotes, culled from stories that ran the week of September 9 to September 13.

• “Yeah, it looks like a dancing hell, right?” — Leonardo DiCaprio to girlfriend Toni Garrn upon seeing the new Marco Brambilla installation at The Standard.

• “I saw her and I was like, ‘Who is that girl?'” — Lindsay Lohan on seeing sister Aliana Lohan in Wendy Nichol’s presentation.

• “Well, you think that if worse comes to worst, you can shoot yourself the next day, which is an option,” — Lou Doillon before performing at a Barneys New York party at the Jane Hotel.

• “In fact, I thought it may have been a good idea when it started raining right when I walked out, but I’m thinking twice about it now that I’m in here.” —  Hailee Steinfeld on wearing a sweater to the very hot Marc Jacobs show.

• “By 2020, there will be 78 million Millennials. It is the next big generation. It’s not an easy target, but it’s something that’s absolutely critical.” —Mark Brooks, senior vice president of consumer and market intelligence, L’Oréal USA on the importance of the Millennial generaton.

• “I’ve been known to buy art sitting in a boring meeting on my Blackberry.” — John Demsey, group president, The Estée Lauder Cos., on his vast photography collection.

• “I’ve reached a certain age where I love to work. I could just live here [at the studio].”  — Francisco Costa on his decade at Calvin Klein.

• “I am so thankful for all of the opportunities CNN has given me over the last decade” — Alina Cho on the cancellation of her regular “Fashion: Backstage Pass” specials.

• “There’s a lot of people I’d rather see mayor than some of the candidates. I’d like to see Fran [Lebowitz] be mayor. And she’s interested. She likes the real estate that comes with it.” — Graydon Carter on the New York mayoral race at the Vanity Fair Best-Dressed party.

• “One of the things I didn’t expect is how different I felt the day after [the deal was completed]. All of a sudden it’s up to us to make it happen.” — Reed Krakoff on the buyout deal for his namesake label.

• “Neiman’s wants those luxury brands. It wants those partnerships. I think the sale of the company is fundamentally good for everyone.” — J. Michael Stanley, managing director at factoring firm Rosenthal & Rosenthal, on the retailer’s sale to Ares and CPPIB.

• “It was complete fate. I started the tube-top craze and began my career off of a pure accident.”” — Elie Tahari reflecting on his early years.