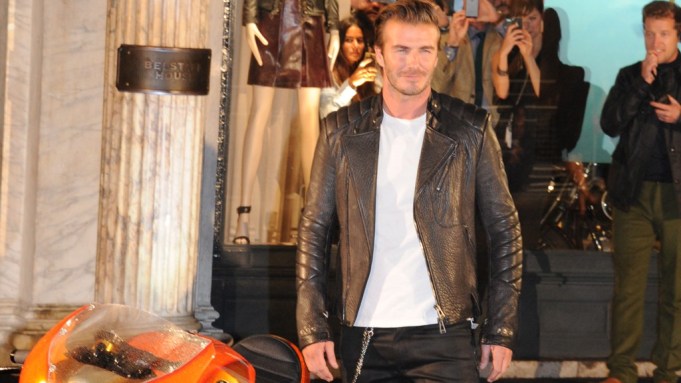 WWD’s week in quotes, culled from stories that ran the week of September 16 to September 20.

“The whole world comes to Mayfair.” — Solange Azagury-Partridge on why the London neighborhood’s retail is booming.

“What I love about riding is the freedom part. When you’re out there, no one knows that it’s you. You have a full-face helmut on, so you enjoy just being alone.” — David Beckham, on riding a motorcycle.

“Who cares about the shoes? I love the movie.” — Manolo Blahnik on his short film about his spring collection.

“I’ve been doing some songwriting — I write all the time — and I’m producing a film called ‘Get On Up,’ a biopic about James Brown.” — Mick Jagger on his current projects.

“There are a lot of great new items coming this way that we don’t have in our wardrobes.” — Suzanne Timmins, senior vice president of the fashion office at Hudson’s Bay Co., on the New York spring collections.

“This is not a book about fashion, it is about a boy from a modest family who achieved success thanks to his strong willpower.” — Roberto Cavalli on his autobiography, “Just Me!”

“We are committed to spend $200 million to renovate our Fifth Avenue flagship and do what it takes to turn it into the most glamorous and luxurious department store in the world.” — Richard Baker on his plans for Saks Fifth Avenue.

“We want to make sure that we are not only French, Italian or English so that the diversity of the world is reflected in the diversity of our teams, in particular the design teams.” — Francois-Henri Pinault in Kering’s talent initiatives.

“Odds are high that by the time Bill Ackman has gone through the hell of covering his Herbalife position he’ll look back at his days with Penney’s as a slice of heaven.” — Activist investor Robert L. Chapman Jr., in a Think Tank on activist investing.

“Can’t you just Google me?” — Colin Firth, pleading ignorance when asked about his latest projects.

“London has become a not-to-miss on our fashion schedules.” — Linda Fargo, senior vice president fashion office and store presentation at Bergdorf Goodman, on the London shows.

“Time [magazine] as a brand remains powerful, but it has to be powerful and relevant in every platform.” — Nancy Gibbs, the title’s new managing editor.

“Don’t get in the middle — like different shades of gray. The middle is not clear.” — Federico Marchetti, chief executive and founder of Yoox Group, on whether luxury players should sell on the Web or not.

“The real model is being able to schlep for somebody else for 15 years and then decide if you want to open your own company.” — Simon Doonan expressing worry over young designers getting success too fast.

“When Milan sets its mind on something, it knows how to do it right.” — Giorgio Armani on the “One Night, One Voice” event at La Scala.

“I knew a partner would be essential for the next step.” — Nicholas Kirkwood on selling a majority stake to LVMH Moët Hennessy Louis Vuitton.

With the 2009 crisis, “Americans rediscovered the value of work in manufacturing, versus the financial world’s multiplication of bread and fish. The manufacturing chain brings a longer-term and more measured wealth that is ethically and socially more acceptable.” — Brioni’s Francesco Pesci

“Buyers are like the great unsung heroes of fashion. I don’t know why designers put a buyer in the third row and some blogger who is still in diapers practically in the first row.” — Simon Doonan

“I think most of us enjoy some form of adrenaline just because it snaps you into the moment and forces you to pay attention,” the actor said. “You stop thinking about tomorrow or yesterday. It’s the sort of immediacy with that kind of fear that makes it thrilling.” — Chris Hemsworth

“Over the past 13 years, he (Roger Farah) has been very successful and a great partner. Roger has played a critical role in driving the company forward and has presided over an unprecedented era of growth and accomplishment.” — Ralph Lauren