WWD's week in quotes, culled from stories that ran the week of November 18 to November 22. 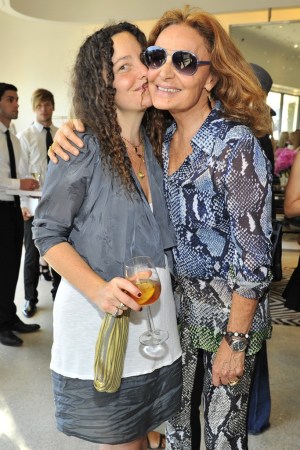 WWD’s week in quotes, culled from stories that ran the week of November 18 to November 22.

• “After all this time, I’m really proud of it. I won’t fight it. It was always good because it paid for everything in my life, but now I look back and I say, ‘Wow!'” — Diane von Furstenberg on the wrap dress, which celebrates its 40 anniversary next year.

• “We’ve got a business to run, and we can’t sit and wait and wait. We’re starting to look at other things on our list.” — Robert Wildrick of Jos. A. Bank on his company’s spurned offer to buy Men’s Wearhouse.

• “I wasn’t very good. I was never on time.” — Photographer Bruce Weber on his start in the business as a male model.

• “The top 30 countries are ready to explode in e-commerce.We are at a tipping point.” — Hana Ben-Shabat, A.T. Kearney

• “The Chinese online consumers are different from their Western counterparts. Monobrands do not work well in China. Chinese consumers grew up on shopping sites like Tmall, which has many brands. That’s why they prefer the multibrand platform.” — M. Claire Chung, Shangpin.com

• “Clearly nothing would have happened had it not been for the Tazreen Fashions fire in November and the collapse of Rana Plaza. Even Wal-Mart couldn’t keep going down this path. They have taken some steps, which are somewhat minor, but it’s a step forward.” — Charles Kernaghan, Institute for Global Labor and Human Rights, on Wal-Mart’s release of its factory audits in Bangladesh.

• “I think the industry need to produce less and create more. This growing phenomenon of overproduction is killing the notion of seasons, and at a certain point, the consumer is going to gravitate toward clothes with more staying power.” — Olivier Saillard of the Palais Galliera in Paris.

• “It’s America who rediscovered her…Without America, she would have closed the operation.” — Karl Lagerfeld on Coco Chanel.

• “For a long time, it seemed that it was just a couple of designers doing their own thing in relative isolation. But now it’s beginning to be more like an actual wave of labels, magazines, photographers and stylists.” — Designer Saara Lepokorpi on Finland’s emerging fashion scene.

•  “We really wanted to challenge the idea that her life story was undeniably related to the Gothic. This biography was tragic, yes, but it was so much richer than that. She was funny — she had a really bawdy sense of humore, a very British sense of humor.” — Fashion historian Alistair O’Neill, on co-curating the London show, “Isabella Blow: Fashion Galore!”

•  “We’ve always talked about mobile, but now it has a major seat at the table.” — Bill Brand, HSN

• “It will definitely reach more people. But the word ‘commercial’ has negative connotations. It will still have the same quality as my collection, but it will broaden the business.” — Thom Browne on the launch of a lower-priced line centered around the gray suit.

•  “She is a high priestess of body language and interpretation of clothes — she is a sculptor in the way she rolls herself into fabric.” — Jean Paul Gaultier on Tilda Swinton’s performance in Paris of  “Eternity Dress.”

• “To me, hierarchy doesn’t exist. Everyone is as important, the ceo or my cleaning lady.” — Karl Lagerfeld at the elite Paris school Sciences Po.

• “I change over the time. I don’t have a fixed position. If you do in fashion, you are dead. You have to adapt to the times.” — Karl Lagerfeld at the elite Paris school Sciences Po.

• “The requirements of every woman are the same, regardless if she is as light as a Swedish girl or as dark as a Nubian girl from Sudan in Africa, it doesn’t matter — everybody wants the same thing, beautiful, flawless skin tone. Everybody is looking for that — make me look beautiful.” — Iman

• “Without a rebound in sales, we see limited ability for the company to stabilize its margins and stem the cash burn.” — Hale Holden, Barclays, regarding Sears.

• “I think it’s interesting to talk about one’s failures as well as one’s successes, especially when you’ve achieved a midlife point.” — Anjelica Huston.

• “I want to get across that behind the fabulous yacht, the Champagne, the parties, there’s a man called Roberto Cavalli, who worked very, very hard to create this wonderful life.” — Roberto Cavalli, speaking to Oxford University students.

• “We see Japanese designers putting forth a radically different definition of beauty. It goes back to the kimono, which didn’t celebrate the bust line, but the nape of the neck.” — Lynda Roscoe Hartigan of the Peabody Essex Museum on the exhibit “Future Beauty: Avant-Garge Japanese Fashion.”
http://wwd.com