WWD's week in quotes, culled from stories that ran the week of June 24 to June 28. 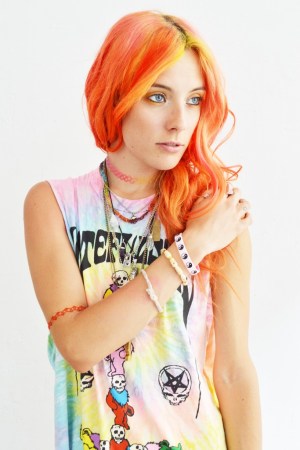 WWD’s week in quotes, culled from stories that ran the week of June 24 to June 28.

• “Fashion has become this uberproduct: It’s not sitting in a corner anymore. It’s way out there being promoted, adored or hated — like a shampoo…[Consumer society is] more and more artificial, toxic in a way.” — Raf Simons

• “I just felt like a mannequin Barbie. I didn’t feel like I had my personality. I was like, f–k this and dyed my hair blue.” — Model Chloe Nørgaard

• “I don’t do many product associations.” — Jeff Koons, on his $20,000 Champagne and sculpture package for Dom Perignon.

• “I think things like women’s magazines not being in the general sector of certain awards is shocking, and on the other hand, women’s magazines consistently ignore general topics. For example, they might do kind of really great long-form pieces, but they’re always about women. You know, why don’t they do pieces about science or new ways of thinking philosophically about the way we live? It’s always kind of counterpointed by being a woman, so the other argument is that women force their magazines to be niche.” — Port editor-in-chief Dan Crowe

• “Everyone’s always talking ‘China, China, China,’ but maybe people are only understanding China how they want to, or they don’t really get how it works here.” — Steven Kolb, CFDA

• “Without Italy, the entire international fashion system would be in a crisis, so I demand respect for all of the country’s pipeline.” — Prada’s Patrizio Bertelli

• “I’m sure that there are many young talents here in Italy — I think that it’s extremely important to teach them that this is not a golden, easy world, but that fashion is a difficult business because you have to reach the public, make factories work and find the right product for the market.” — Giorgio Armani

• “[The Italians] are better in terms of fashion, and I’m speaking about clothes, not bags, but we didn’t have the balls to stand up for a longer show week…” — Giorgio Armani

• “I think every man has a double identity — at least I do. I like tailored clothing — and I like leather.” — Daniele Cavalli

• “I love the fashion industry, but it is fast and furious and absolutely insane at times.” — Carmen Marc Valvo

• “When you come from the supplier side as we do, these million-dollar ad campaigns are a big adjustment, but they’re also a necessity.” — Faisal Ahmed of DL1061 Premium Denim

• “It shows that even a small firm, with a well-prepared management and clear ideas, can attract investors from all over the world.” — Andrea Tessitore on the IPO of Lapo Elkann’s Italia Independent Group

• “This successful transatlantic operation sends an important message to the criminals, showing them that they cannot hide despite the fact that they are operating via the Internet.” — Rob Wainwright, Europol, on the seizure by US and EU officials of 328 domain names of websites selling counterfeit goods

• “He was the last representative of the great era of couture, of elegance, opulence and refinement.” — Stephane Rolland, remembering the late Jean-Louis Scherrer

• “A dress supporting a voice, a skill, an actor, a ballet. I like when my work is contributing to something, and I love when it’s shared with unknown people.” — Christian Lacroix

• “Milan has lost some of its luster…They better shape up. The ingredients are all there, but Milan itself is not exactly electrifying.” — Emmanuel De Bayser, Berlin’s The Corner

• “I think Chinese higher-end consumers have changed their tastes mainly because they have gotten to know more brands and the market has provided them with more choices. They have become pickier than before.” — Foniz Huang, Beijing-based fashion buyer

• “The other day she asked me: ‘Why don’t you have your runway show in Paris instead of Milan?’ I don’t know where she got that from: She’s only five. She probably wants to see the Eiffel Tower.” — John Varvatos on his daughter

• “Everyone knows that I’m completely obsessed with fashion, style and anything glamorous and beautiful.” — Rachel Zoe

• “Herald Square has achieved something that is very difficult to do. Retailers tell you, ‘There’s no bad space.’ Here, there truly isn’t. We’ve put our latest, greatest designs in there, so it’s going to be the best that we have to offer. This is going to be one of the best-performing beauty departments, in terms of volume, on a global basis.” — Thia Breen, The Estee Lauder Cos., on Macy’s revamp of its beauty floor.

• “While taking this action today, the administration is also initiating new discussions with the government of Bangladesh regarding steps to improve the worker rights environment in Bangladesh so that GSP benefits can be restored and tragedies like the Rana Plaza building collapse and Tazreen Fashion factory fire can be prevented.” — U.S. Trade Representative Michael Froman on the suspension of Bangladesh’s trade benefits

• “What I do know is that as a founder and large shareholder, I am greatly concerned about the future of the company if this culture and these values are lost, and believe that the board should be open to at least consider the full range of possibilities that could optimize the future value of the company for all stakeholders.” — George Zimmer, on Men’s Wearhouse

• “Ultimately he was unable to convince any of the board members or senior executives that his positions were in the best interests of employees, shareholders or the company’s future.” — Statement from board of directors of Men’s Wearhouse on ousted founder George Zimmer