WWD's week in quotes, culled from stories that ran the week of July 1 to July 5. 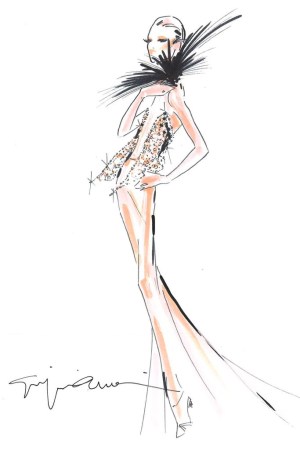 WWD’s week in quotes, culled from stories that ran the week of July 1 to July 5.

• “We want to be more than just garments on a rack.” — Raymond Gindl, chief executive of Century 21, on its plans for growth.

• “I remember him as a nice boy and a good worker.” — Hubert de Givenchy on Gerard Pipart, who died last week at 79.

• “They are 5-foot-2 and petite and so am I, so  when I see them pull something off, I think, ‘If they can do it, maybe I can also.” — Carly Rae Jepsen on the Olsen sisters, her style icons.

• “I’m concocting something — a little bit of shopping, some culture.” — Uma Thurman at the Atelier Versace couture show, on her plans for her trip to Paris.

• “What this industry needs is perhaps greater exposure. The more the better, to show that behind the dream there is a lot of hard work.” — Giorgio Armani on 10 specialty ateliers in Paris opening their doors to editors.

• “I think that the most important message in men’s fashion right now is that men want ‘fashion.'” — Jeffrey Kalinsky, executive vice president of designer merchandise at Nordstrom, on the men’s season in Paris.

• “Retail is suddenly becoming much more rational and normal. Before it was crazy. It was a frenzy.” — real estate tycoon Adrian Chang, who unveiled his K11 Mall in Shanghai.

• “The basic idea for me is that I like the idea of freeing the couture.” — Raf Simons of Christian Dior

• “I absolutely wanted to come back, but it perhaps did not happen in the ideal conditions that we could have imagined.” — Claude Montana, who did three looks for Eric Tibusch’s fall couture collection.

• “Makeup is always harder than training – it’s harder than most anything.” — Jennifer Lawrence at Christian Dior, on playing Mystique in “X-Men: First Class.”

• “Hopefully, every year is going to be like this.” — Oscar de la Renta on his retrospective in Little Rock, his CFDA award and his Q&A at 92Y.

• “I’m going to try desperately to not be squashed by a woman like that, and it’s not going to be an easy thing.” — Kristen Stewart on working with Juliette Binoche.

• “I’m too old.” — Carla Bruni on not riding the roller coaster with her son at Parc Asterix.

• “If an ambassador comes here and thinks he can do his work in the old traditional way, to stay in his office and send diplomatic notes and wait for an answer, I don’t think he has a chance. That isn’t how this city works.” — Italian ambassador Claudio Bisogniero on the new diplomacy

• “Our industry needs exceptions. Year after year more regulations on the state and federal level occur, and it doesn’t seem to align with this whole government initiative of keeping manufacturing in America and Los Angeles.” — Deborah Greaves, secretary and general counsel of True Religion Apparel Inc.

• “While people in Arizona are used to high temperatures in the summer, we’re not used to 119 degrees in June.” — Sherry DeCovich, assistant vice president of marketing for Macerich-operated centers in Arizona, commenting on the heat wave sweeping the West.

• “The uniforms are so important. It’s the first impression people will see when they’re checking in.” — Jonathan M. Tisch, chairman of Loews Hotels & Resorts, referring to the new uniforms for the Loews Regency on Park Avenue, designed by Stan Herman.

• “People are asking what the Pinterest logo is doing here. It is a good way to show what is trending out there in social.” — Bryan Galipeau, social media group manager at Nordstrom, explaining that hangtags, cards and clips with the Pinterest logo are affixed to women’s dresses, handbags and shoes that are heavily pinned on Pinterest.

• “I really enjoyed being able to play a role that was strong, sexy and in control.” — Nicole Kidman, on starring in Jimmy Cho’s new ad campaign, which has a film noir feel.

• “It was an amazing adventure and I’m very confident in the future of this brand.” — Paul Deneve, outgoing ceo of Yves Saint Laurent

• “Collaborations are a great vehicle for trying something different and to bring a fresh perspective to my vision.” — Tommy Hilfiger on his collaboration with George Esquivel for a limited-edition collection of men’s and women’s footwear.