WWD's week in quotes, culled from stories that ran the week of July 8 to July 12. 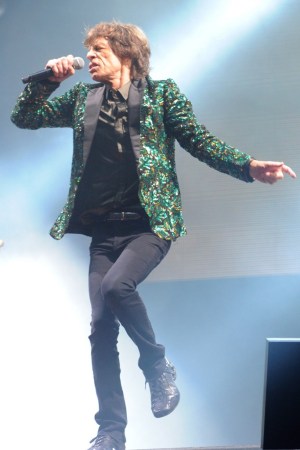 WWD’s week in quotes, culled from stories that ran the week of July 8 to July 12.

• “If I see another man on the street in skinny pants that don’t fit him, I’m going to scream. It’s time to loosen up.” — Michael Kors.

• “Who would not be flattered to have an entire Jay-Z track named after them? I mean, come on, it’s pretty rare that something like that happens.” — Tom Ford on Jay-Z’s song titled Tom Ford.

• “It’s the evolution of a man. You go from like shoes and jewelry to cars and homes to traveling and now it’s art. You know what I’m saying? It’s natural. It’s not forces, like his friend are into this shit.” — Rapper Wale, on Jay-Z’s immersion in the contemporary art market.

• “Sailor has a good head on her shoulders so navigating her way around any negatives should be a breeze. She is, after all, named Sailor.” — Christie Brinkley on her daughter’s entry into modeling.

• “I spoke one time at a songwriting thing and the kids were asking me questions about being an artist. I told them all of the costumes and the glitter and the glitz and the glam is great, but if you don’t have the talent, you just look like a freak.” — Katy Perry.

• “The economy and consumer spending are like a car stuck between first and second gear. They’re not in neutral and they’re certainly not in reverse, but they’re in the midst of anemic, mediocre growth.” — Craig Johnson, Customer Growth Partners.

• “Consumers are increasingly channel-agnostic. They don’t mind how they shop at retail. In China, customers will often research online, and then buy in-store.” — Carol Fairweather, Burberry.

• “Red Square is such a historic place for our people. This is where the intrigues of Ivan the Terrible and the Victory Day parades that still take place today on May 9 happen. And the fact that they allowed Christian Dior — a brand that in the Soviet times was always sort of mythical and unattainable — to put on their show here is kind of like a fairy tale.” — Russian “It” Girl Vika Gazinskaya.

• “I feel very optimistic about the energy in Paris. What is compelling right now is that you see elements from street, urban and sportswear all combining, but with high-end fabrics.” — Wanda Colon, Barneys New York.

• “Clothes represent happiness. They’re our protection — even a reflection of what’s in our heads, our thoughts and ideas. Hence the phrase ‘wearing our hearts on our sleeves.'” — Hip Hop star Nasir Jones, aka Nas.

• “As far as the actual social media goes, we in the industry as a whole have to make a turn towards using more user-generated images. There is something refreshing about seeing someone who is not a size zero, who looks like you do wearing an outfit. You get a feel for what actual styling is.” — Reese Pozgay, Marc Jacobs.

• “Drug traffickers’ only motive to enter the illegal drug trade is the money and they will go to any length to hide and protect their proceeds.” — DEA Special Agent Marc R. Trouville on charges against 31 individuals of laundering hundreds of millions of dollars through six Columbian textile companies.

• “Before, there was always a husband or a father at their side. The issue is not who is paying — it’s who chooses the piece, and how they wear it. It’s a revolution in the world of jewelry.” — Hamdi Chatti, Louis Vuitton, on how women are increasingly choosing fine jewelry for themselves.

• “It’s a very competitive card game. President Clinton plays a thousand times better than any other one playing. What drives me insane is he can be looking at the television, the newspaper, and playing cards and he still plays far better than anyone else. This year in March we had a tournament and I won the first prize, but I still have my doubts. I think it was arranged because it was in my house.” — Oscar de la Renta, on playing cards with the Clintons.

• “You know, at the end of the day we’re all just another bozo on the bus.” — Actress Natasha Lyonne.

• “If you look at the guys at the top of the list, they are making huge capital commitments, upgrading operations and making inventory more flexible — and that is because they have to compete with the likes of Amazon and live up to the expectations of two-day fulfillment and almost boundless inventory.” — Maureen Mullen, L2 research, on ranking department stores’ digital efforts.

• “I don’t think there’s a single ceo in this country who has been through what I’ve been through in the past year, so if nothing else, I am seasoned and battle-worn.” — Launa Inman, Billabong.

• “Teenagers today do not want to be a billboard for a brand anymore.” —Emelia Fabricant, Aéropostale.

• “I think what the tragedies this past year have shown is that there are no fast or easy solutions to the problems to bring compliance in Bangladesh up to the standards of American brands and retailers. That is huge. That is the elephant in the room.” — Julia Hughes, U.S. Association of Importers of Textiles & Apparel.

• “Unless the government of Bangladesh leads the effort and changes, you won’t see real change. All you will see are a lot of companies trying to protect themselves by forming strong agreements, but I don’t know that you will solve the root cause of the problem, which is subcontracting….and that world needs to be regulated.” — Rick Helfenbein, Luen Thai USA.

• “US exporters face significant uncertainty in the Brazilian market. This uncertainty is amplified by the frequent changes in tariffs made by the Brazilian government to protect domestic industries from import competition.” — David Shark, deputy US permanent representative to the WTO.

• “Everything in M&A is all about psychology, so if the consumers start getting nervous again, that will have an impact on the businesses and on the players, but right now all the lights are green.” — Elsa Berry, Vendome Global Partners.