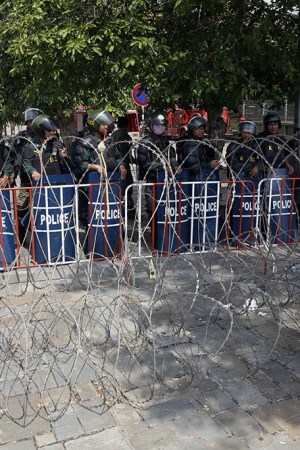 “We are only here with lotus flowers and the police welcome us with razor wires and fences. It is very threatening.” — Huot Ran, a Cambodian garment worker at a labor demonstration in Phnom Penh.

“When I first actually met him, he was fitting me for a dress backstage after a Privé show — I think it was the first Privé show. He immediately put me at ease. He got down on the floor and started measuring my hemline. He didn’t have someone else do it, he did it himself. He was there — the great man — literally at my feet. It was a way of saying, in this moment you are the most important person. It was a profoundly generous thing for him to do.” — Cate Blanchett on meeting Giorgio Armani for the first time, the start of a long relationship.

“The script was one of the best scripts I’ve ever read — you know, it’s Woody — but I just felt that I’d fallen flat on my face. When we were shooting, Sally [Hawkins, a costar] and I kept saying, ‘It’s really nice to have known you on the deathbed of your career.’” — Cate Blanchette on her role in the Woody Allen-directed “Blue Jasmine.”

“It’s clear that our financials are not where they need to be, particularly as it relates to top line. Yet, we are making progress in strengthening the underpinnings of the Avon business.” — Avon CEO Sheri McCoy told Wall Street analysts during the company’s earnings call.

“This is the tiniest tip of the iceberg, he kept everything. He was a hoarder. He kept receipts, copies of every letter.…This is the room where I think everybody will get a sense of the wildness of his imagination.” — Harold Koda, who curated the Metropolitan Museum of Art’s Costume Institute exhibit, “Charles James: Beyond Fashion.”

“Companies essentially have two levers to get help on margins. One is pricing, for the companies that have the power to influence it, and the other is managing inventories at better levels. Last year, inventories were a little higher across the industry and there was a lot of promotional pressure. Better alignment with demand could help ease the markdown pressures.” — Moody’s vice president and senior credit officer Scott Tuhy on a new report on the state of the U.S. Apparel industry.

“I know you don’t like dinners, Karl, but thank you for coming to this one.” — Fendi’s chairman and chief executive officer Pietro Beccari addressing Karl Lagerfeld at a dinner party to mark the opening of its new Bond Street store in London.

“He’s a johnny-on-the-spot. If you’re ever in any kind of jam, there’s a couple of people you call. Scott is on my speed dial as far as when I put my dog down, when I moved apartments,” — Justin Theroux, at a party and fund-raiser in tattoo artist, Scott Campbell’s honor Wednesday night by the organization Free Arts NYC.

“We are going to rid the world of this dread disease,” — Leonard A. Lauder at the Breast Cancer Research Foundation’s annual Hot Pink Party.

“It was like the East Village of Berlin…And I think one night at 5 a.m., with like no sleep, someone said, ‘We should do a book with everyone.’” — Elizabeth Gilpin on the new book of photographs entitled “Youth.”

“I sold Girl Scout cookies and I must admit, I sold a lot of Girl Scout cookies. People say, maybe that was the start of my retail career.” — Ann Keating, senior vice president of public relations and corporate philanthropy at Bloomingdale’s, while being honored at the Greater Girl Scouts of New York gala.

“It’s equally important for what it doesn’t do. You can make the world’s most active product, but if your skin can’t handle it, it’s useless. This product puts your skin in a state where it can accept these actives, which are dispensed by the serum according to the user’s needs.” — Lynne Greene, group president of Clinique, Origins, Ojon, Aveda and Darphin, on Clinique’s new Smart Custom-Repair Serum.

“When designing the bag, I wasn’t thinking about a single woman but a generation of women. In interviews, people will ask me who is my muse, but it’s not just one woman; it’s different women in different situations and different moments.” — Ferragamo creative director Massimiliano Giornetti, on the Fiamma handbag.

“Oakley is an industrial design brand, first and foremost. That’s our roots.” — Erik Searles, vice president of retail for Oakley, at a preview of the company’s Fifth Avenue flagship in Manhattan.

“In the fashion industry, usually, people who do what I do aren’t allowed to do everything. It’s like, ‘What are you — an author or a TV star? Are you a fashion designer or a publicist? In the sales space, people like Opening Ceremony have created their own brands. We’ve been here for 20 years. Why wouldn’t it be healthy to apply that experience to all areas of your life?” — Kelly Cutrone on launch of her sportswear label Electric Love Army.