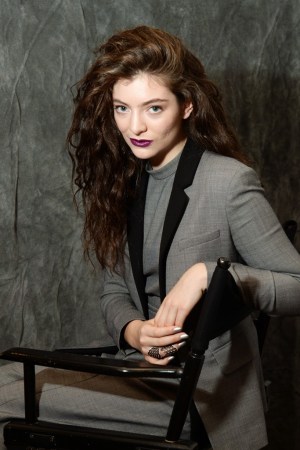 “I’m a really big fan of MAC and have been since before I could really afford it. When they approached me, I jumped at the chance. It’s rare that you find a brand that feels so perfect. I hate weird product placements and endorsements that feel uncomfortable.” — singer Lorde on her new limited-edition MAC Cosmetics collection.

“Gap Inc. recently discovered a fraudulent website, http://www.gapdoesmore.com, and its accompanying social media property, @gapdoesmore. These sites are not authorized by Gap Inc. or any of its brands. We are investigating the source of these fake digital properties.” — a Gap spokeswoman said in an email to WWD.

“For investors to get returns, the only way to see a return on investment is probably to go public or sell the company. That’s true of any company. We have no plans to do either at this point.” — J. Crew Group chairman and chief executive officer Millard “Mickey” Drexler speaking as the company opened new stores in China.

“Thirty quality stores is very solid progress and reiterates we are well on track to meet the 110 stores in three years that we announced last October.” — a spokesman for Wal-Mart, on Wal-Mart China opening 30 stores and more distribution centers in the country.

“I like the idea of slick and traditional, and I want my clothes to be different yet wearable. To be really stylish and chic, a woman doesn’t need to shock people. It’s more about having a confident personality.” — designer Zaid Affas on starting his own label.

“It’s a way to respond to a customer that’s been evolving and growing. A few years back they were just approaching the market, and now they are the real experts.” — Celine CEO Marco Gobbetti as the brand plans to stage its first runway show in China.

“I remember back in the Seventies when my sister and Jennifer Connelly would model for our children’s shows, and then we stopped for almost 30 years, so this is fun.” — David Lauren backstage before Ralph Lauren’s fall kids’ show at the New York Public Library.

“We know there is an opportunity to present the full-fledged collection because we’ve had requests. They contact us through e-mail, they call us, they look on the e-commerce site and say, ‘Where can I get this in Texas?’ Then they go to other stores when they travel. It’s a constant dialogue with them on social media.” — Balenciaga CEO Isabelle Guichot on opening a store in Dallas.

“The show becomes always more international. We are inching our way toward 40 percent of international visitors. Our main goal is to continue to grow on the international markets.” — Xavier Clergerie, co-general manager of Who’s Next, on paris trade show organizers looking for steady attendance in the second half of 2014.

“It makes sense for the Lord & Taylor brand. William Rast is a young contemporary brand, and it appeals to our Millennial consumer.” — Liz Rodbell, president of Hudson’s Bay and Lord & Taylor on the brand offering tailored and sportswear lines exclusively in the U.S. at Lord & Taylor.

“I mainly didn’t consider Guillaume a man during the process.” — Christian Lacroix on designing costumes for French actor Guillaume Gallienne in the title role of “Lucrèce Borgia.”

“It really gets my engines running.” — Suki Waterhouse attending Chopard’s party at the Cannes Film Festival.