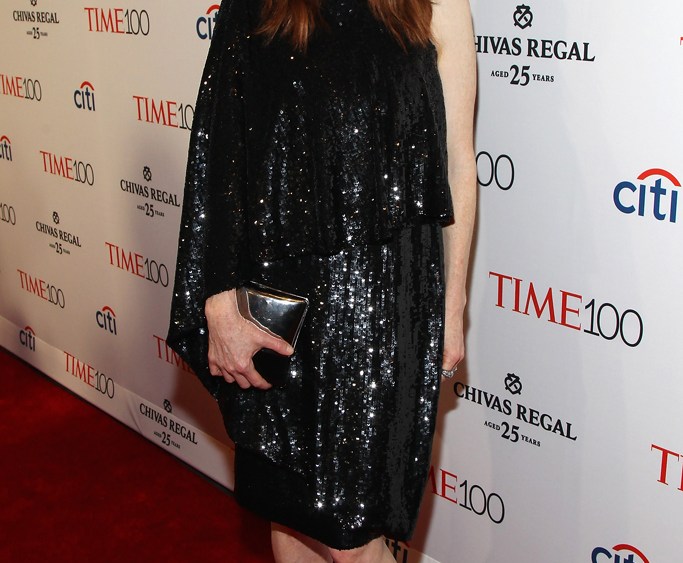 Tuesday night’s red carpet for Time magazine’s annual gala in New York to fete its list of 100 of the most influential people in the world was its usual hodge-podge of people you know, people you think you know, and people you don’t know but probably should know.

Coming off his own big interview with Edward Snowden, John Oliver, who was honored for his comedy, joked that he “doesn’t have anything” lined up to follow that gig.

“I have nothing. Absolutely nothing,” Oliver said. “I’m not even saying I don’t know yet, I have a huge one. I don’t have anything. I’ll show you my cards. Nothing.”

Sarah Koenig, whose Serial podcast earned her accolades, does have her next project lined up, but she stayed quiet.

That thread of secrecy ran throughout the evening.

The always colorful Jenji Kohan, who wore a store-bought blue dress to match her deep aqua hair, said she couldn’t reveal new themes in her show “Orange is the New Black,” either.

She did address the role she plays in the acceptance of the LGBTQ [lesbian, gay, bisexual, transgender and questioning] community.

“I like to tell stories and I don’t set out to say ‘now I’m going to educate America about LGBTQ and all this stuff,’” the writer and producer said. “Shonda [Rhimes] talks about normalization. She says, ‘you tell everyone a story’ because you want to cast as wide a net as possible, so they can see themselves and identify. The more stories they can relate to, the more the stories are familiar and not frightening.”

When asked what “risqué” topic she’s looking to explore next in OITNB, Kohan said: “I can’t say, but yeah, I want to poke the bear.”

Moments earlier, Martha Stewart made her way down the carpet, and talked about her big moment penning a piece in Time on Kardashian, who was one of the honorees.

“I don’t know her really,” Stewart said. “But I think like with Justin [Bieber] asking me to roast him, Kim felt kind of safe with me. She didn’t ask me, Time asked me.”

As the night wore on, Kardashian’s appearance with West, her husband and fellow nominee, was imminent.

“This is the year of the ass,” Amy Schumer deadpanned when prompted to talk about what she would say to Kardashian at the dinner that followed.

“I think she’s such a badass. She’s such a businesswoman and a strong mom and I don’t feel like either of those things,” the comedian said. “I have not met her, but would you believe that we don’t have that much to talk about?”

Schumer may not have much to say to Kardashian, but she did make quite the impression. As Kardashian and West made their way down the carpet, Schumer tripped in front of them, exposing her own backside to the couple and a gaggle of laughing photographers.

Although the couple didn’t flinch — or show any expression for that matter — Bradley Cooper and Laverne Cox cracked up and posed for pictures with Schumer, who it turned out, was the most influential star on the carpet that night.