By the end of business on Wednesday, The New York Times and The Wall Street Journal both reported that the interested buyer was Meredith. 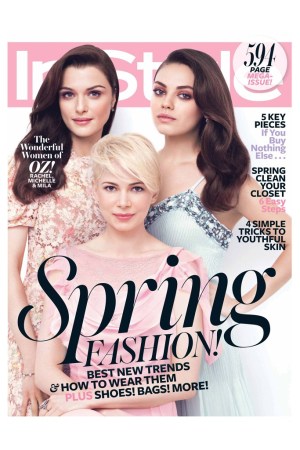 TIME IN TALKS: Time Inc. is in early talks to divest its publishing assets, reportedly to Meredith Corp.

The country’s largest publisher has been dogged by rumors of a possible spin-off from parent company Time-Warner Inc. for years. As early as 2009, chief executive officer Jeff Bewkes went on the record to dismiss the speculation — although last week in a CNBC interview he admitted it was something the group was mulling over.

This story first appeared in the February 14, 2013 issue of WWD. Subscribe Today.

Fortune.com broke the story Wednesday, with a source telling the site that “a serious buyer” was interested in the Time Inc. portfolio. According to fortune.com, one possible scenario is that Time Inc. would keep Time, Fortune and Sports Illustrated, its oldest titles, and sell off the rest of its portfolio, which includes the highly lucrative People and InStyle. Though Fortune did not report this, it is logical any deal would include the other titles in Time’s news and sports group, like Money magazine.

Advising the talks is Chicago-based bank BDT Capital Partners, a favored bank of Warren Buffett’s, which led to speculation from several industry observers that Buffett, who’s recently shown an affinity for newspapers, was the interested buyer.

But observers noted BDT is also the bank of choice for Meredith, the Iowa-based publisher that already owns a slew of women’s titles, like Ladies’ Home Journal and More magazine. BDT advised Meredith in its purchase of the Web site Allrecipes.com from the Reader’s Digest Association early last year.

By the end of business on Wednesday, The New York Times and The Wall Street Journal both reported that the interested buyer was Meredith. “It is our policy not to comment on marketplace rumors or speculation,” a spokesman for the company told WWD. Time Inc. also declined.

Though for years the spin-off or outright sale of the publishing division was discussed at the highest echelons of the company, it was ultimately deemed a nonstarter because the tax implications would have been too costly, a complication that Warner Communications had already overcome when it merged with the publisher in 1989.

One possible reason for keeping the news and sports group now is to mitigate the tax costs, not to mention that a company named Time-Warner wouldn’t make sense without the Time part. The Times reported Meredith was not interested in the news titles.

Meredith, in comparison, had net profits of $104.7 million on revenues of $1.38 billion in the year ended June 30. For one, if it decides to carry through with the Meredith talks, Time-Warner would be flowing with the tide.

In December, News Corp. revealed plans to separate its publishing assets, including the Journal, from its more profitable entertainment assets, like 20th Century Fox.

In his CNBC interview last week, Bewkes was asked if Time-Warner could ever follow that model and for the first time did not flat-out deny the suggestion. Instead, he painted a rosy picture of the Time Inc. brand, singling out both People and InStyle to note that while advertising is down, its magazines are “performing competitively.”

“The question of whether we ought to put [publishing] in a different frame is one we’ve been asking. At this point, we have not decided to do something like that, but we will keep investigating,” he said.

With the talks at an early stage, it is premature to speculate on the cost of the acquisition, though Forbes put a price tag at between $3 billion and $6 billion. Meredith, a publicly traded company, is capitalized at $1.7 billion and has been in an acquisitive streak recently, snatching up, in addition to Allrecipes.com, Every Day with Rachael Ray magazine. Still, it is significantly smaller than Time Inc., and if it successfully buys several of Time’s titles, it would automatically vault into the top tier of magazine publishers. Then there would be the culture clash: the New York-based Time titles versus the Des Moines-based Meredith. Ironically, Laura Lang’s predecessor as Time Inc. ceo was Jack Griffin, who joined from Meredith but soon afterward got the boot because of a clash of culture.

The Time Inc. up for grabs is a much leaner beast than it used to be. Following company-wide layoffs in 2008, Lang ordered in late January a 6 percent cut in its 8,000-employee workforce, or nearly 500 employees.

In addition to the 6 percent, employees at People, Time and Sports Illustrated, as well as Entertainment Weekly, had until Wednesday to accept separate buyout offers. At Time, no volunteers had stepped up, and the weekly was looking at laying off 12 staffers, including six that belong to the Newspaper Guild of New York. At EW, long-time critics Ken Tucker and Lisa Schwarzbaum both accepted the offers this month, while Constance White, the editor in chief of Essence since 2011, is also out, though it’s unclear if her exit was tied to the buyouts.