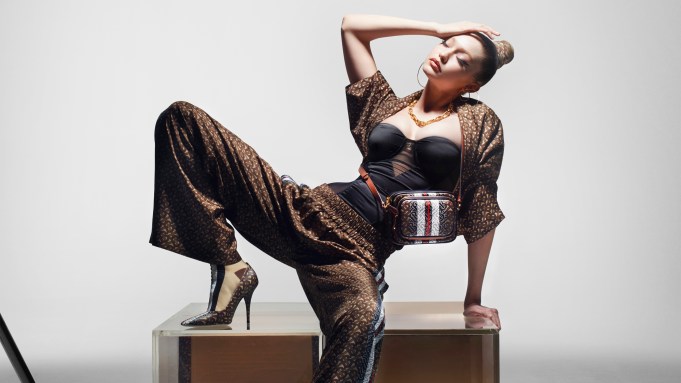 Burberry has revealed its first Monogram collection, designed by chief creative officer Riccardo Tisci, and featuring Gigi Hadid, who is making her campaign debut for the brand.

The campaign and accompanying video were shot by Nick Knight, and the collection will drop in selected Burberry stores globally and online on May 22.

Hadid takes on a number of personae in the campaign, transforming into a boy, a gentleman, a girl and a lady, reflecting the brand’s aim to dress clients across different genders and generations. Tisci originally lifted the veil on the interlocking TB motif, designed with Peter Saville and named for company founder Thomas Burberry, last summer.

“I’ve wanted to work with Gigi for such a long time, but knew I had to wait for the right moment and right project,” said Tisci. “I have so much love and respect for her whole family, so it felt very familiar working on such a special first campaign.”

Tisci added that watching Hadid at work was “mesmerizing and magical. She put so much energy and passion into the project, and transformed from one character into the next with such seamless conviction. That’s what makes Gigi one of the few girls who define this decade, not only through her beauty, but also through her compassion, talent and sophisticated approach to her work. I can’t wait to work with her again.”

The new TB logo was big news when it was first released last summer, and has only appeared on some items, such as silk scarves, T-shirts and leather bags, until now.

Tisci said that when he first started at Burberry, he clocked a lot of time in the archives, and was taken with the figure of Thomas Burberry, “not only as an inventor and innovator, but also who he was as a man, a husband and a father. When I saw an image of his initials, the design felt so special and actually very modern.”

With regard to the Monogram collection, Tisci said he wanted to “celebrate the breadth of who we speak to as a brand. Alongside some of the most talented creative icons of today and tomorrow, I am so proud of what we achieved together.”

Knight said the idea behind the shoot was to create imagery that allowed Hadid “to play out the four characters in a simple, stripped-back and honest studio environment.”

Hadid said the shoot was one of the most fun days she’s ever had, and that she was “honored and grateful” that Tisci trusted her with the project.

The Monogram collection covers ready-to-wear and accessories, with pieces that include an oversize T-shirt, silk trousers, a camera bag, socks and pumps, a hoodie, baseball cap, sneakers and a barrel bag. There are also nylon car coats for men and women, sunglasses and even a non-slip yoga mat created in collaboration with Liforme.

The collection ranges in price from 50 pounds to 1,500 pounds.