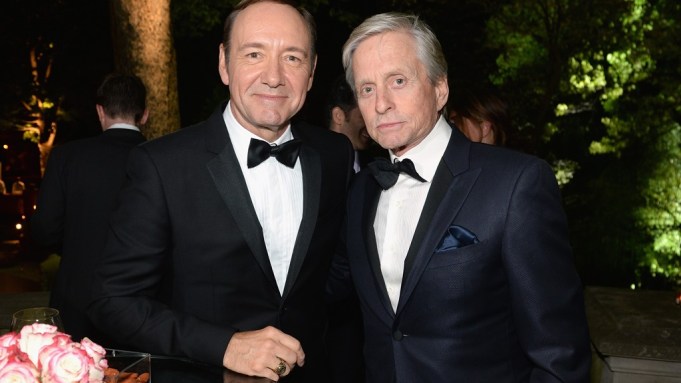 TOASTING EACH OTHER: Opinions vary every year about the White House Correspondents’ Dinner. One knee-jerk reaction is to be blasé about the whole circus.

“If you’ve been here so many times before, you’d not be able to tell which year it was,” said MSNBC host Lawrence O’Donnell Friday night at The New Yorker’s party at the W Hotel. “They’re totally predictable in every way.”

But the higher you are on the food chain, the more seemingly relaxed you are, the more willing to suspend your disbelief at the alternate universe you’ve stepped into for a weekend.

Before the proper dinner started Saturday night at the Washington Hilton, it was Kevin Spacey, the fake senator from “House of Cards,” who was seen giving Michael Bloomberg, the real mayor of New York City, an earful as Steven Spielberg looked on. Elsewhere at the Hilton’s International Ballroom, Bill O’Reilly was overheard goading some poor soul to come on his show for a debate. “It’ll be a great segment,” he said. Supreme Court Justice Antonin Scalia, part of the same huddle, was uncharacteristically silent.

“This weekend is a vacation,” said New Yorker editor David Remnick at the magazine’s party. “Let’s hope it doesn’t last too long.”

Arianna Huffington was at the annual Friday afternoon dinner at the home of Atlantic Media Co. owner David Bradley, the unofficial kick-off to the weekend. “Exhale,” she advised. “Be open to a lot of surprises. A lot of unusual pairings of guests. I have my Jersey boys at my table — Shaq, Jon Bon Jovi and Chris Christie.”

Over the years, the actual correspondents’ dinner has evolved from a small get-together for journalists to schmooze with sources to a sprawling confab for journalists and media organizations to schmooze with celebrities and advertisers. Festivities start, in some cases, on Thursday night, and stretch through Sunday brunch. Some business gets done.

“It was everyone I wanted to talk to or owed a phone call to in one room. I got six months’ work done in one night,” said Cosmopolitan editor in chief Joanna Coles after the dinner.

And it’s not a half bad moment of marketing, an event now widely covered by all media organizations, even those without White House correspondents. The E! Entertainment Network this year covered the red carpet. Netflix got a great plug for “House of Cards,” as the series had a prominent place in the video skit before President Obama’s speech, as did the Web sites Politico and Buzzfeed. In one joke, Ben Smith, the editor of Buzzfeed, said to Spacey’s character, “How about this, you tweet it, I’ll retweet it.”

But it’s mainly an opportunity for the powerful to catch up with the friends they hadn’t seen since Davos, or the Oscars.

Conan O’Brien, the host for the evening, picked up on this during his roast. It is like a high school cafeteria.

“Fox is the jocks, MSNBC is the nerds. NPR is the table for kids with peanut allergies. Al Jazeera is the weird foreign exchange student nobody talks to,” he said.

At the Hilton, star power naturally congregated closest to the dais. If the best seats in the house were beside the Obamas, or maybe O’Brien, the second best were in the orbit of Table 65. Barbra Streisand was sandwiched between Bloomberg and Senator Mark Warner, and opposite them, Spacey was the cream filling between Donna Karan and Bloomberg’s girlfriend, but very accomplished in her own right, Diana Taylor. Further out into the ballroom, you’d have found at Table 109 Remnick and Anna Wintour.

“We’re friends. And she’s my colleague, and she’d never been,” said Remnick at the New Yorker’ party when asked why he’d brought Wintour. After the dinner at the Hilton, Wintour waited by the ladies’ room.

“It was lovely to see Harvey [Weinstein] and Barry [Diller] — he was here with Nicole [Kidman].And my friends from New York,” she said.

Behind them, someone did right by Weinstein by sitting him between Kidman and Senator Claire McCaskill. At table 79, Coles talked sex tips and dragons with “Game of Thrones” actors Natalie Dormer and Nikolaj Coster-Waldau. Hearst Newspapers honcho Lincoln Millstein patiently listened on.

Hollywood and Washington also love correspondents’ weekend because they get to play parts different than those the public has assigned them. So at the Vanity Fair-Bloomberg party at the French ambassador’s home Saturday night, it was not surprising to see celebrities lining up to meet politicians and communicate they too have opinions.

Meanwhile, the politicians got to schmooze for a change. Graydon Carter was smoking a cigar in the terrace when New York City police commissioner Ray Kelly spotted him. “You’ve done it again, Graydon!” It must have come as such a relief to the commissioner that enforcing smoking laws was somebody’s else job that night.

Spectacle or not, there was one topic over which there was no disagreement.

“The president just killed it, three times I’ve been here and I think, how does he do it?” said Kyle MacLachlan at Vanity Fair’s party.

Even Jeff Zucker, O’Brien’s old nemesis at NBC, was impressed. Not far off from MacLachlan, he and O’Brien’s executive producer Jeff Ross parsed the evening. “It was a hard act to follow,” Zucker said, referring to the president.