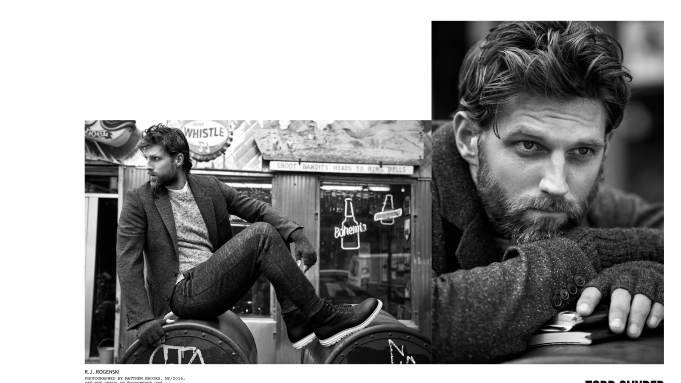 The designer, who sold his company to the retailer last year for $11 million, will launch the first advertising campaign for his men’s wear brand today.

“Being that this is our first year under American Eagle and we have our store opening in November, we wanted to come out of the gate with something special and put a stake in the ground to solidify who the Todd Snyder guy is,” Snyder told WWD.

The designer approached Trey Laird of Laird+Partners, with whom he had worked with at The Gap and the Council of Fashion Designers of America, to kick around some ideas. “I always wished I could work with somebody that talented,” he said. “So I told him I didn’t have a ton of money but asked if he would help, and he was willing.”

Laird partnered Snyder with celebrity photographer Matthew Brookes, who cast four models for the campaign, which is called “Todd Snyder: Gentlemen of New York.” Snyder said each of the models has a “different story.”

Brookes shot the men in black-and-white in different locations around Greenwich Village to capture the classic New York sensibility of the brand.

The images feature Miles McMillan, “The Urban Artist,” who Snyder said represents the “younger and more-sporty” side of the brand; RJ Rogenski, “The Urban Poet,” has a “rugged sophistication”; Akin Akman, “The Urban Athlete,” was tapped for his “superfit” physique, and Adonis Bosso, “The Urban Traveler,” is “just cool when you look at him.”

The images will be featured on the company’s web site beginning today as well as on taxi tops and other places around the city this fall “to lay the foundation for the brand,” the designer said. Other initiatives will be added as the store opening gets closer.

The 5,000-square-foot flagship at 23 East 26th Street, off Fifth Avenue, will be located in the bustling Madison Park district of Manhattan. It will include a tailor shop, a barbershop and the designer’s collaborations with Globe-Trotter luggage, Macintosh trenches, John Smedley knits and Superior Labor bags. A Black Label suit that is manufactured by Southwick, in Massachusetts, will be offered in the store exclusively as well.