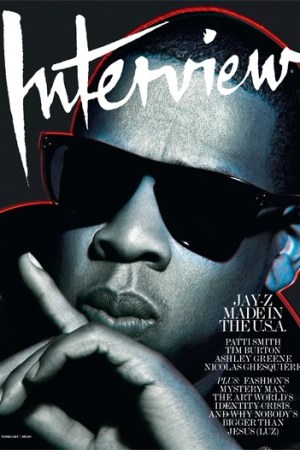 TOM FORD: INTERVIEWER: From a billboard in Los Angeles to a steady stream of magazine profiles, Tom Ford is everywhere. Next up: the February issue of Interview, where the director of “A Single Man” interviews Balenciaga designer Nicolas Ghesquière. Ford helped Gucci Group acquire Balenciaga in 2001, largely due to his interest in Ghesquière, whom he refers to, in the story, as his favorite contemporary designer. And while much of the piece focuses on fashion, Ford also has other things in mind. “I want to ask you about golf,” Ford says. “Because I was reading somewhere about you playing golf. I don’t think people ever imagine fashion designers doing something like playing golf. You are probably going to hate this question, so we won’t print it if you do not like it.”

“Actually, I love golf clothes! I think this is the most interesting part of golf!” says Ghesquière. Ford later asks where Ghesquière sees himself in 10 years. “Are you going to be playing golf?” he jokes. “Sure. I’ll have to start, so in 10 years maybe I can have a good handicap,” answers Ghesquière. “Honestly, I think I will be here at Balenciaga. Maybe not only. I have no idea what I would do for my own collection if that does happen one day. I give so much of myself for Balenciaga that today, if you put me in a room and said, ‘OK, let’s try to do a Nicolas Ghesquière project,’ I wouldn’t be able to do it.” The issue hits newsstands on Jan. 26. — Amy Wicks

SINGLE MAN, NUDE WOMAN: Speaking of all things Tom Ford, the men’s wear and accessories designer is unveiling his spring advertising campaign and guess who’s playing model this time out? None other than English actor Nicholas Hoult, the young star of “A Single Man.” Shot by Ford at the Sunset Tower Hotel in Los Angeles, the ads feature a Brylcreemed and dapper-looking Hoult accompanied by model Carolyn Murphy, wearing nothing save some tan lines and Ford-designed eyewear. The campaign, which will break in March books, will also appear on a billboard in Los Angeles and on the Tom Ford Web site. — Nick Axelrod

STICKING WITH BRITNEY: Britney Spears has renewed her partnership with Candie’s. The pop star will appear in Candie’s Only at Kohl’s marketing campaigns throughout the end of the year. A spokeswoman said the company is not disclosing any more information on the campaign, although in December, there were reports that Annie Leibovitz shot Spears in “various stages of undress” in Hollywood. — A.W.