Tommy Gets Fresh for Fall

NEW YORK — Tommy Hilfiger is freshening up its image.

Taking a modern look at Hilfiger's heritage, the company's fall ad campaign is full of firsts, beginning with the logo. Confident that everyone knows his red, white and blue flag, the... 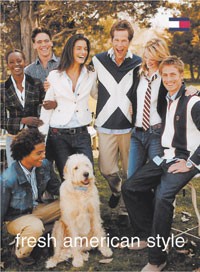 NEW YORK — Tommy Hilfiger is freshening up its image.

Taking a modern look at Hilfiger’s heritage, the company’s fall ad campaign is full of firsts, beginning with the logo. Confident that everyone knows his red, white and blue flag, the designer’s name is nowhere to be seen on the ads themselves. The company is also minimizing the flag logo and displaying it in the top right corner.

“We think [that] by now, the logo says it all,” said Celia Rao Visconti, senior vice president of advertising at Tommy Hilfiger. “When people see these ads, they will see the clothes and be able to tell who we are.”

Secondly, the company is adding a slogan to its campaign for the first time. Labeled “Fresh American Style,” the phrase explains Hilfiger’s mission as an “authentic American apparel company,” said Visconti.

To help display the new concept, the company brought on Toth Brand Imaging, whose work on the Hilfiger campaigns from 1992 to 1997 helped position the brand as a youthful American label. The fall campaign, photographed and created by Mike Toth and Tommy Hilfiger’s in-house creative director, Mirian Lamberth, aims to capture the carefree optimism of the earlier ads.

“It was shot in the Hamptons over four beautiful days in early May,” Visconti said. “It really set the stage for what we are getting across. It’s paying homage to our heritage as an American lifestyle brand, but doing so in a modern, fresh way.”

The ads showcase 13 female and male models including Anne V., Kiara Kabukuru and Mini Anden, all in vacation mode — goofing around at the beach, on the boardwalk and driving around town. Visconti said the company wanted to give the impression the group of friends was experiencing the good life, all dressed in Tommy Hilfiger, of course.

The campaign, which breaks in August issues of select fashion and lifestyle magazines, will continue through September when TV ads will air. The company hasn’t advertised its apparel on TV in four years. Visconti said the media buys are still not finalized.