Those celebrities who made the list were Oprah Winfrey, Beyoncé, Rihanna, Taylor Swift and Reese Witherspoon.

Forbes today revealed its 17th annual ranking of The World’s 100 Most Powerful Women and among German Chancellor Angela Merkel (number one); Christine Lagarde, president of the European Central Bank (number two), and Kamala Harris, U.S. vice president-elect (number three), was Tory Burch, executive chairman and chief creative officer of her namesake company, who came in at number 88. Burch was bested in the fashion world only by Rihanna, chief executive officer and artistic director of Fenty, who can in at number 69, and Beyoncé, who teamed with Adidas to launch her Ivy Park activewear brand, who came in at 72.

Burch, whose company brings in $1.5 billion in sales from apparel, footwear, watches and fragrances, also heads a charitable foundation that has been helping female entrepreneurs since 2009. This is her sixth time on the list, having made it in 2010, 2013 to 2016 and this year. Others from the retail world were Judith McKenna, president and ceo of Walmart International, who came in at number 17, and Maggie Wei Wu, chief financial officer of Alibaba, who was number 60.

Among the other celebrities on the list were Oprah Winfrey at number 20; Taylor Swift at number 82, and Reese Witherspoon at number 92. 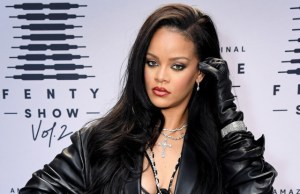 “Across all corridors of power, the leaders of this year’s list of The 100 World’s Most Powerful Women are rising to address the unprecedented challenges of 2020 head on,” said Moira Forbes, executive vice president of  Forbes and publisher of Forbes Women. “While COVID-19 has put hard-won gains achieved around gender equity at risk, this year’s listees are solving for long-standing problems that require urgent action to move us all forward.”