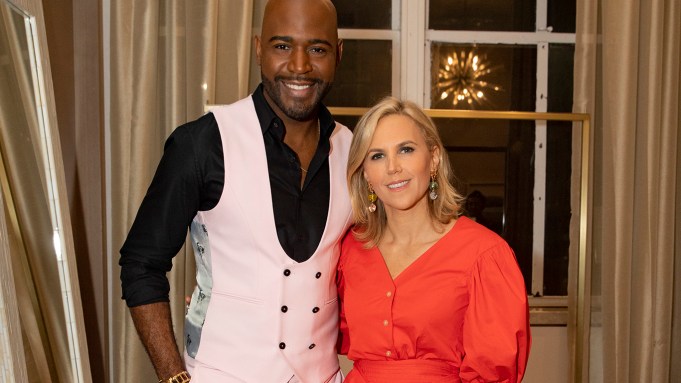 Two days after her fall fashion show, Tory Burch was at Saks Fifth Avenue in New York celebrating her company’s new pop-up and exclusive travel-inspired capsule. She also participated in an on-stage conversation with Karamo Brown, star of “Queer Eye,” about her fashion show, nurturing corporate culture, boosting women’s self esteem and key influences in their lives.

The conversation was followed by an intimate dinner at L’Avenue hosted by Saks president Marc Metrick and chief merchant Tracy Margolies, with guests such as  Adwoa Aboah, Halima Aden, Larsen Thompson, Gucci Westman and Colby Mugrabi.

Taking the stage in the contemporary department of the flagship’s fifth floor before up to 250 people, Burch and Brown, who’s the culture expert on Netflix’s “Queer Eye,” had lots to talk about and found they had a lot in common, particularly the influence of their mothers and grandmothers and their affinity for building a culture at work. The conversation had some elements of a gospel meeting, with audience members asked to turn to their neighbors and repeat some of the key phrases that came out of the conversation, such as: “Failure is not the opposite of success, it’s part of it.”

Topping the agenda was a discussion about Burch’s fashion show, which was held Sunday at Sotheby’s in New York. “The show went well. We worked so hard for a year in advance. I often say it’s like planning a wedding a year in advance, and it’s over in nine minutes, and then, people weigh in,” Burch said. She explained that her influence was the Dutch Master artist, Judith Leyster. After her death, they took her name off her paintings because she was a woman, and they attributed them to her husband and tutor. After a couple of hundred years, she got her name back on it. “It was more about women and the arts and how they’ve struggled,” Burch said.

As she described her design process, Burch said she’s not your typical designer. She spent the last 15 years learning about business and how to be a designer. But she emphasized several times throughout the talk that she surrounds herself with a great team. “It’s really working with them to push the limits always. How do we constantly move the needle and think about being relevant from a trend standpoint, but not necessarily trendy?” Burch said. She added she wants to have pieces she can wear over and over again.

Burch spoke about the 72 hours before a show when everything starts to trickle in, and the whole collection comes together — the handbags, the scarves, the jewelry, the clothes. She said you work for a year and start putting everything on people. “It’s intense. You’re in a room for four or five straight days without leaving,” she said.

Brown said he knows someone who once worked for Burch and loved it. That woman told Brown about the team environment and that as a young woman not high on the design team, Burch allowed her to have a voice and made her feel important. Burch asked for her name, and why is she a former employee, and Brown replied, “She just moved on.”

Burch said she hires people who are outstanding and lets them shine. When you have 6,000 employees, you have to constantly work on the culture and make sure the people you hire understand the culture. It’s treating people well, she said.

“You better treat the Queen of England the same way you treat the cab driver,” said Burch. “When you let people shine, you shine,” Burch said.

Brown, who’s trained as a social worker and psychotherapist, spoke about the importance of empathetic listening. “If you can listen empathetically to other people, it allows you to grow and be better and create better relationships. You don’t have to be the one to solve the problem. Sometimes it’s OK just to listen to someone, that’s all they need,” Brown said.

According to Burch, the reason she started her company was to be able to start a foundation for women. She also said employees spend so much time at the company, “you better behave like a family.” She has instilled some of her late father’s values, which she calls “Buddy’s Values,” into the firm such as kindness, integrity, being straightforward, working with excellence and having humor. She said that culture can change, and can be fixed.

The Tory Burch Foundation, which works with Bank of America, has given close to $54 million in low-interest loans to women-owned businesses and is having another summit on March 5 where women can apply for the 1,200 spots to attend the free event at Lincoln Center. In May, Burch will fly 50 women in business to New York and introduce them to potential investors and give them advice in legal, public relations, branding and merchandising, as well as host workshops.

When Brown asked how women can support other women in their lives, Burch said, “A lot comes down to confidence. If you show people your vulnerabilities and be OK with that, it’s half the battle. A lot of problems women have are their own confidence issues. And you need men to be part of this conversation and support women,” she said.

Brown spoke about having four older sisters and being raised by his mother. He’ll have conversations with men in the cast to check their behavior and look at how they’re behaving toward women, and will ask, “Are you OK with being that way for your daughter or your mother?” Burch said equal pay for women should be a given. He said when he talks to fathers about their daughters, they agree.

Burch said she hears women say they feel more confident when they wear her clothing. “That’s the best thing anyone can say to me,” she said. She said women can support women by speaking up and encouraging them to believe in their dreams. “If I can do this, anyone can do this,” she said. She noted that she started Tory Burch 15 years ago when she was a stay-at-home mother. “I had no business to be able to start this business and make it grow, but it’s been a tremendous amount of hard work and I surrounded myself with incredible people. If you give people the ability to see the stars, they will reach for them and grab them,” she said.

Brown also said people are often afraid to ask for help, and asking for help makes you stronger. “As you’re on your journey to achieve your goals, if something happens to stop you, it doesn’t make you a failure…Failure is not the opposite of success, it’s part of it,” Brown said.

Finally, when Brown asked her which women she looks up to, Burch, said, “My mother. I have three brothers, and I would do anything and it was the best thing. She made me believe that I could do anything if I worked hard and put in the effort. I think that positive energy made me reach for things that I never thought possible.”

For his part, Brown said his greatest blessing was growing up being surrounded by women. He described his mother as “very fierce.” While her hair and makeup always had to be right, she wasn’t afraid to show her vulnerability and she didn’t mind saying, “I need a moment. She’s very expressive.” He said his grandmother could have been a therapist, if she could have gone to college. She lived in Jamaica and her father believed only her brother should go to college. She would often give advice to her friends and family. “It was so special for me to see as a young man,” Brown said.