An image from Tory Burch’s “Walk the Walk” campaign.

Tory Burch, whose 16-year-old company has been empowering women through her Tory Burch Foundation, is taking the message directly to the consumer this spring.

“Walk the Walk,” a 360 campaign that encompasses digital, social media, store windows and wild postings, breaks this week, coinciding with International Women’s Day on March 8 and Women’s History Month. The spring campaign aims to communicate the importance of the foundation and the impact it has had on women achieving their dreams. It features the brand’s overarching message of women’s empowerment, captured in its call to action, #EmbraceAmbition, and also highlights the company’s products.

The campaign represents the first time the company is integrating the foundation into the brand’s external communications.

“Our mission is to empower women, reflected in over a decade of work by the Tory Burch Foundation. It drives us all forward, and is the reason I wanted to create a company that gives back. To make an actual impact. To walk,” said Tory Burch, executive chairman and chief creative officer of Tory Burch LLC and the foundation’s founder.

The campaign features Natalia Vodianova, founder of the Naked Heart Foundation, who opened Burch’s fall 2020 and spring 2020 fashion shows, as well as Anok Yai, who was born in Egypt and raised in New Hampshire and was studying pre-med before she started modeling and is an advocate for the STEM fields, along with Burch herself. The videos and print campaign were shot by Mikael Jansson.

The campaign’s video shows Vodianova, Yai and Burch walking and talking about the importance of embracing ambition. “To me, ambition has to have purpose…,” said Vodianova. Yai added, “Your character is how you treat someone [who] can do nothing for you.” Burch sums up her personal philosophy and the sense of purpose that drives her: “Embracing ambition means empowering other women.”

The images and video will be featured on the toryburch.com homepage, which will also highlight the Embrace Ambition bracelet ($30) and the Limited-Edition Embrace Ambition Perry Tote ($348). One-hundred percent of all net proceeds from the sale of these products will benefit the foundation. In addition, the campaign encourages social engagement with a custom Instagram filter, inviting people to share how they #EmbraceAmbition and tag a friend. 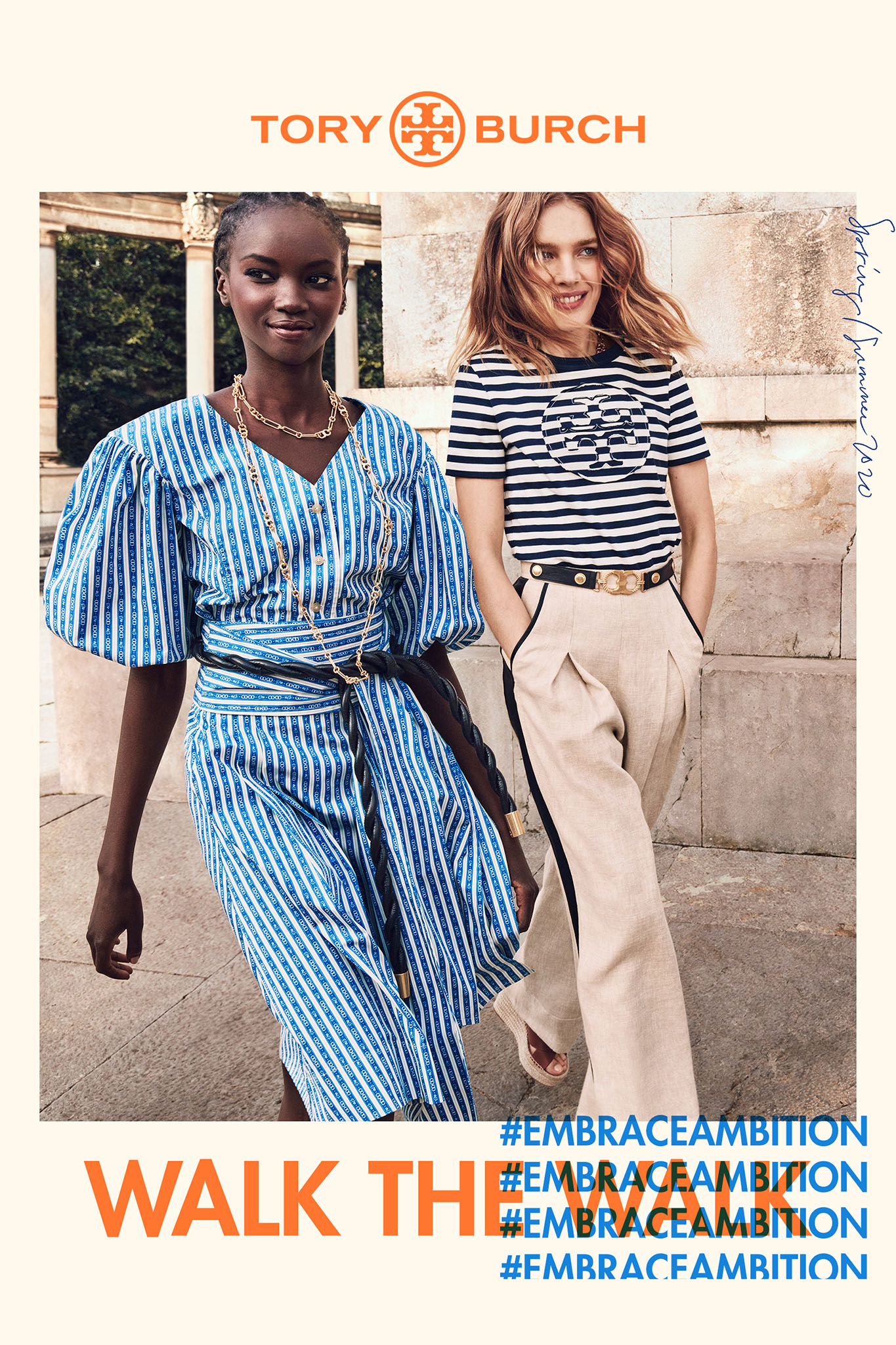 As part of the campaign, the company will launch a pro bono #EmbraceAmbition out-of-home campaign that poses such questions as “Why don’t we say working dad?” “Why is ambition not admired in women?” and “Why do we say female ceo’s?” These questions will appear on digital media and billboards throughout the month of March in cities throughout the U.S., including New York, Boston, Chicago, Dallas, Los Angeles and San Francisco. This is the fourth pro bono foundation campaign Burch has done.

Over its 11-year history, the foundation has given $54 million in affordable loans in partnership with Bank of America and has helped more than 10,000 women write business plans using its resources. It also supports 50 Fellows annually through mentoring and grants. But the company has never advertised that fact.

In an interview at her Manhattan offices, Burch said the team wanted to be careful about talking about the foundation in an external way before they had real things to talk about. She felt now was the right time due to “the scale and the impact of the work that we’re doing.” Burch said she’s very proud that the company has given $20 million to the foundation through the sale of its products.

Burch said giving back was important from when she started her firm, along with women’s issues. “It never occurred to me that gender would be such a big issue until I got into the workforce, and I saw a big discrepancy in the way women were treated. I knew I wanted to start a foundation to help women and children. I didn’t know exactly what the foundation would be when I started the company, but I did have that as my business plan. It occurred to me that I had knowledge, and that’s what I could give,” she said. The knowledge she had was being an entrepreneur and seeing the challenges that other women were facing in trying to start a business “and how can we change that dynamic,” she said.

Burch explained that when she started her business and went to fund-raise, people said to her “don’t ever say business and social responsibility in the same sentence.”

“That was 15 years ago. It’s really turned a corner. I think that businesses aren’t innovative today without social impact,” Burch said.

According to Laurie Fabiano, president of the foundation, they are averaging giving $1 million a month in low-income loans. The average loan is $21,000, and these are going to women who wouldn’t be getting loans at a traditional bank.

On March 5, the “Embrace Ambition” summit will take place at Jazz at Lincoln Center’s Frederick P. Rose Hall. Sponsored by Bank of America, the summit — which is held every two years — will feature speakers such as Gloria Steinem; Ashley Judd; Tina Tchen, president and ceo of “Time’s Up”; Diane von Furstenberg; Steve Case, cofounder of AOL and chairman and ceo of Revolution, a D.C.-based investment firm; Anne M. Finucane, chairman of Bank of America and chairman of the board of Bank of America’s European bank; Wade Davis, former NFL star and speaker and writer; Mellody Hobson, co-ceo and president of Ariel Investments; Derek Blasberg, YouTube’s head of fashion and beauty and author, and Cathy Engelbert, commissioner of the WNBA. There will also be live performances by such artists as Yola, a Grammy award-winning singer and songwriter.

Some 1,200 people are expected to attend the complimentary conference, including 500 people who were selected out of 2,600 people based on essays they wrote. The audience will also be comprised of students, nonprofit local community groups, sponsors and entrepreneurs who work with the foundation.