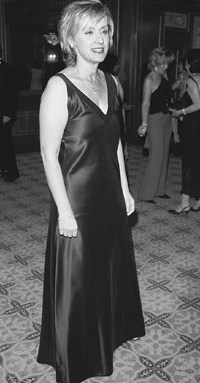 NEW YORK — Despite sounding like a conundrum, PEN honored three incarcerated writers Tuesday night before a ballroom full of people who earn their keep using pens and sometimes feel like they’re trapped in one.

One hundred and eight writers pushed back from their desks to attend the 80-year-old free speech advocacy group’s annual gala, which raised $825,000. Guests bemoaned the recent clampdown by the Federal Communications Commission, the Patriot Act, the war in Iraq and other turbulence in the world. Weighty stuff for a black-tie affair, but leave it to a bunch of wordsmiths to try to set the record straight.

Even master of ceremonies Tom Brokaw was uncharacteristically reserved — up to a point. “This is a humbling experience for someone who makes his living by putting on makeup and reading out loud on a daily basis.”

PEN’s president Salman Rushdie, who was condemned to death by the late Iranian leader Ayatollah Khomeini, told the crowd, “I don’t know if anyone has noticed how weird the world has gotten. There’s a reason for the defense of literature. It’s something deeper than the right of writers to be annoyed. Human beings are the only creatures on earth who use stories, dreams and poetry as a way of understanding themselves. When you limit writers’ freedom, you’re limiting more than their ability to do their jobs.”

Rushdie drew applause on two occasions: When he said, “This a moment when America desperately needs to listen to the rest of the world” and later with, “A lot of people in this administration are failing to be supportive of free speech.”

During the cocktail party, Rushdie was more reserved when discussing his next book. “The only thing I don’t talk about is unfinished work,” he said, adding his next novel addresses “cultural collision with a murder thrown in.”

Despite being months away from his December retirement, Brokaw showed no signs of kicking back. He said he’s been gearing up for the election since this past November. “It never lets down. I talk to people constantly. At this point in my life, it’s second nature.”

As emcee, Brokaw poked fun at President Bush and presumptive Democratic presidential candidate Sen. John Kerry. On a more serious note, he encouraged the crowd not to give in to conventional thought. “We need not live in turbulent, dangerous and emotional times, but that requires the active involvement of all of us.”

Over cocktails, benefit chair and CNBC TV host and columnist Tina Brown plugged her cause. “PEN furthers literacy, free speech and reading. At this point in time, we all care about free speech and should be concerned about protecting it,” she said. “It doesn’t come down to whether Howard Stern said something obscene.”

After the awards presentation, Paley, who helped select the winners — Nasser Zarafshan, Le Chi Quang, Barbara Parsons Lane, as well as publisher Joesef Isak — said she was interested in what the crowd would take away from the event. “This shows there’s opportunity — even in a terribly closed situation — for human beings to understand themselves, to really live and to get beyond the thing that wrecked them. Some people are destroyed at a certain point or almost destroyed. But you can make a decision in favor of life.”

In terms of her own life, Paley is writing poetry — a practice started at the age of 12. “I need to take things in one hand to understand what I’m doing,” she said. Never mind her half dozen, half-written stories. The writing life ain’t easy. “Everything is difficult to get right. But that’s what we want — to get it right,” Paley said. “You have to read it and look at it. It’s hard work and suddenly you get closer and closer. It’s also a very interesting thing. It’s almost fun.”

Erica Jong appeared to be having some fun during dinner, when an onlooker noticed her take off a bejeweled coral-colored sandal and present it to her tablemates. True to form, Jong wasn’t afraid to bare herself.

More guarded was 88-year-old playwright Arthur Miller, who wasn’t eager to talk shop or plug his two new plays. “The New York Times just wrote about it,” he barked. So much for self promotion.

Others were more than happy to talk about themselves. Asked to name his favorite book, Dominick Dunne said, “the one about New York that got me into a lot of trouble,” referring to his 1988 take on what happens when old money and new money collide in Manhattan. “This one’s going to get me into trouble, too.”

Climbing the Wedgwood blue-and-gold carpeted stairs towards the Pierre’s ballroom, Dunne said he’s at work on the sequel, “A Solo Act.” Due date? “I don’t know. It’s way overdue,” he shrugged.

Frank McCourt also spoke of unfinished business. He’s wrapping up “Teacher Man,” a tale about his 30 years teaching in the New York City school system. “That’s what they called me. My students would say, ‘Yo, Teacher Man.’”

Hoping to finish up by the end of the year, McCourt said he doesn’t get hung up on schedules. “Joyce said he could write anywhere — Paris, Zurich, wherever he was. Most writers write 8 (a.m.) to 12 (p.m.) but that was not for him. Even when he was going blind, he would say what he wanted to write to Samuel Beckett or one of his other slaves. I don’t worry too much about being at the desk.”

Vartan Gregorian’s book about nationalism is still in the works, too, but he remains tops with Diane von Furstenberg. The designer stepped into a conversation, hugged him and declared, “My favorite person in the world.” Even before the bear hug, Gregorian said he hoped people were “most appreciative of how rich American talent is and how wonderful New York is for being made up of artists and writers.”

A new CD and two nonfiction books are in the works for Judy Collins. That, and “I’m on tour all my life.”

Approached during dinner about his latest projects, Jonathan Franzen, author of “The Corrections,” wanted to give it some thought. “Let’s see…projects, projects,” turning to his tablemate for some input. “You caught me off guard. Can you e-mail me tomorrow?”

The following day he wrote, “I’m working on a long nonfiction piece about my adolescent experience of liberal religion, and then there is the usual amorphous many-fronted assault on the next novel.”

Is there an editor in the house?