Members of the American Apparel & Footwear Association must harness the power of Internet marketing and focus on consumers in growing Asian economies. 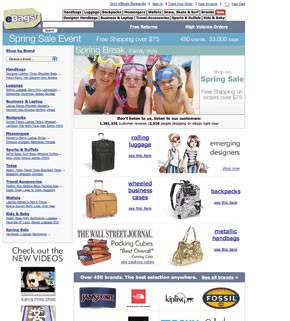 TUCSON, Ariz. — Members of the American Apparel & Footwear Association must harness the power of Internet marketing and focus on consumers in growing Asian economies as the U.S. economy falters, experts said.

Amid worries about the downturn that may worsen with inflation, almost 100 members of the trade group gathered to strategize at the Loews Ventana Canyon Resort here from Wednesday to Friday.

Rising costs were targeted as a major concern, along with sinking consumer confidence, high gasoline prices and a buckling housing market. Several members said they already had resigned themselves to a recession and were cutting costs and imposing stricter inventory management.

Inflation “is a real problem and it’s getting worse,” said Jeffrey Garten, former dean of the Yale School of Management and undersecretary for trade in the Commerce Department under President Bill Clinton.

In his evaluation of the economy, Garten said the Federal Reserve Board is taking a gamble by cutting interest rates to spur the economy before controlling higher prices.

“We will have slow growth and we will have inflation that will take many, many years to cure,” Garten said, noting that this scenario last occurred in the Seventies. “The weaker the dollar gets, the more inflation we’ll have, given our heavy dependency on imports.”

Garten predicted that the U.S. faces at least one year of a substantial slowdown, with no growth for six months. Lower-income consumers will have to endure the downturn even longer than the middle class, he said.

However, the rapidly expanding economies of China and India are generating new members of the middle class — at least 1 billion combined by 2025 — who can buy U.S. exports. “The implications here are not only new markets [for American companies] but also new competitors,” Garten said.

The power of the Internet is another terrain to explore.

Among the techniques for boosting Quiksilver’s Web presence is tying its marketing to Google maps, such as including a Quiksilver photo and logo when a user does a search for a Quiksilver-owned store on Google’s online mapping service. “We view the Web site as a primary mechanism for marketing our product,” Nicholson said.

Zappos.com provided insight on how to build a brand and retain customers online. “The best marketing is not to pay for ads, but to increase customer experience [like providing free shipping],” said Tony Hsieh, president of Zappos, based in Henderson, Nev.

Founded in 1999, Zappos offers more than 1,100 brands, free shipping for purchases and returns and a yearlong window for returns. Projecting more than $1 billion in gross merchandise sales this year, Zappos started selling apparel in 2007. Apparel, now 3 to 4 percent of sales, is projected to increase to 15 percent of the total business by yearend.

The Internet doesn’t spell the end of brick-and-mortar retail, however. To ensure that Zappos doesn’t tarnish its brand as a full-price, full-margin retailer, the company off-loads discounted items from its flagship business to a Web site called 6pm.com. Afterward, 6pm.com ships unsold inventory to five outlet stores in Kentucky and Nevada.

Zohar Ziv, chief operating officer of Deckers Outdoor Corp. in Goleta, Calif., said the fast-changing global economy forces his company to “change fast and be adaptable.” “We’ve got to think of a different way to do things, like telecommuting,” Ziv said.

Rick Darling, the New York-based president of Li & Fung (Trading) Ltd., said a faster marketplace means the end of a patriarchal management system, in which decisions are made by one person in a senior position. Creating a new work environment that emphasizes more opinions from different employees is also crucial to retaining young employees. “A traditional corporate environment — kids rebel against that,” he said.

The youth market is worth courting. Bob Mettler, the former chairman of Macy’s West who is president of special projects at Macy’s Inc., said the consumers born between 1979 and 1999 are “80 million strong and just beginning to make their buying power felt.”

One way for Macy’s to make an imprint on the so-called Millennials is by partnering with action sports companies that the young customers already trust to sponsor surf competitions in Hawaii and Huntington Beach, he said.

Nevertheless, the core female customer isn’t forgotten by Macy’s. The contemporary shopper at the chain receives special packaging, bags and invitations to cocktail parties, for instance. “For retail stores to be successful long term, we have to reach many of these customers,” Mettler said.