Icons from different corners of the fashion world, from Marvin Traub to Alec Wek and the Belks, were under the spotlight Wednesday night for the annual...

By David Moin and Karyn Monget on May 16, 2008
View Slideshow 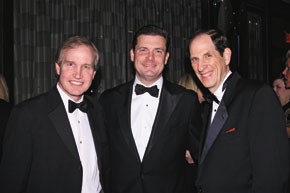 NEW YORK — Icons from different corners of the fashion world, from Marvin Traub to Alec Wek and the Belks, were under the spotlight Wednesday night for the annual American Apparel & Footwear Association Image Awards at the Grand Hyatt on 42nd Street here.

This story first appeared in the May 16, 2008 issue of WWD. Subscribe Today.

Also honored were VF Corp., with its visionary chairman, Mackey McDonald, accepting the award, and Badgley Mischka. For many in the crowd of 600, raising more than $750,000 for two fashion charities, Kids in Distress Situations and Fashion Delivers, it was a trip down memory lane. “We started with a tiny rack of dresses and everyone thought they were designed by some Russian woman,” said Mark Badgley, who, with his cohort James Mischka, received AAFA’s Designer of the Year award. Now, of course, the duo designs a vast range of product, from eveningwear to watches, to furs.

“Thirty-three years ago, I was in Paris. So was Marvin. I worked for A&S, Marvin was a [general merchandise manager] at Bloomingdale’s,” then both Federated divisions, recalled Daniel Schwarzwalder of Buckingham Capital. “He ran a Federated review of the lines and you really had to be prepared. You had to know everything — and I didn’t even work for him. Marvin is the hardest-working guy I know.”

Bloomingdale’s current chairman and chief executive officer Michael Gould introduced Traub, his predecessor, by stating, “In the interests of getting everyone home before it’s time to eat breakfast, I’ll try hard not to list all of Marvin’s accomplishments.” Gould said Traub embodies the spirit of self-renewal and has “a clock that never stops. Marvin has shown that life is endlessly unfolding.”

It was particularly poignant that Gould welcomed Traub, since years ago they didn’t see eye to eye on how to steer Bloomingdale’s. “I like to feel in recent years you and I have become very good friends,” Traub said, in a sign that past differences are water under the bridge.

Traub retired from Bloomingdale’s 17 years ago and launched a new career as a consultant and investor. His life and Bloomingdale’s experience was chronicled in his book, “Like No Other Store,” and Traub, in accepting AAFA’s Lifetime Achievement Award, plugged his second upcoming tome, entitled “Like No Other Career.”

Upon receiving her Spirit of a Woman Award, model Wek, a Sudanese refugee, said that, as much as she would like to bask in the moment, it was best to shed light on the plight of refugees, especially in her native Sudan. “Organizations like these are truly impacting the lives of those in need of help.”

McKay Belk, president and chief merchandising officer of the Belk chain, accepted the Retailer of the Year award on behalf of his family, citing KIDS and Fashion Delivers for “offering a hand of hope. If we don’t find innovative ways to help these children, there will be no hope.”

And McDonald accepted the Excellence in Lifestyle Branding award on behalf of VF.

Iman presented the award to Wek, but before reading her speech and after being introduced as an icon, said, “I am an icon, yes, but I am getting old and I need glasses.” The model said she is expanding her year-old venture of Iman Global Chic accessories with HSN to include cosmetics, fragrance, caftans and several new handbags. Miss Universe, Riyo Mori, and Miss USA, Crystle Stewart, were both in Badgley Mischka strapless evening gowns and jewelry by Stephen Dweck.

The awards ceremony was billed as the 30th edition, but, not to split hairs, technically was not. The event was founded 30 years ago by The Fashion Association under executive director Norman Karr as a tribute to public service. But the awards were skipped for two years, 1980 and 1981, due to the then recession. So, while it’s 30 years since their inception, Wednesday’s gathering actually marked the 28th American Image Awards.