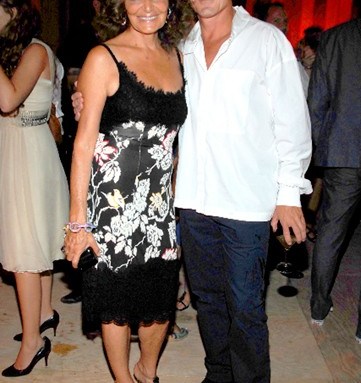 What would Andy Warhol have thought of the Meatpacking District?

The spirit of the man who called himself “deeply superficial” was what organizers of Interview’s relaunch party had in mind when they picked as a site the construction site of the Standard Hotel. Lean downtown types saw their getups subjected to fluorescent lighting as they made their way upstairs, and models in tall stiletto heels wobbled their way across plywood and around steel beams. “It’s what Andy would have wanted,” said Interview publisher Alan Katz.

Attendees included Tommy Hilfiger, Andre Balazs, Diane von Furstenberg, Jessica Stam, Donna Karan, Terry Richardson, Angela Lindvall, Lydia Hearst, Tama Janowitz, Craig McDean, Steven Klein, Mary-Kate Olsen (who, along with Lauren Hutton, jumped on stage with surprise musical guest Taz Arnold), and Ryan McGinley. “It’s working for me,” said Richardson of the magazine he shoots for. As for the party, “It feels good here, it has good energy.” Padma Lakshmi, who admitted she had only seen the cover, called it “really chic” and dashed out after doing a quick lap. Brant Publications owner Peter Brant and his wife, Stephanie Seymour Brant, held court upstairs, where the former model beat the heat with a short man who held her hair up and blew on her neck as she did interviews. Downstairs, performers in elaborate costumes writhed on blocks, and co-editorial director Glenn O’Brien wandered among them wearing a white hard hat.

The crowd was treated to several musical performances while they mingled and munched on sushi. “Y’all love Obama?” demanded Fab 5 Freddy, warming up to the performance by Arnold. “Pay no attention to Sarah Palin and that trailer park reality show.” — Irin Carmon and Stephanie D. Smith