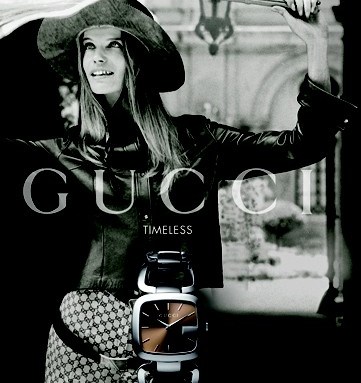 HOW TIME FLIES: Gucci has set its clocks back. Tapping into its archives, the luxury goods house pulled two black-and-white snapshots from the Sixties that will serve as the backdrop of its new worldwide watch campaign. The ads, featuring model Veruschka and the late actor Peter Sellers, will debut in fashion and lifestyle titles this month as single- or double-page spreads. Superimposed on the old photos are three new Gucci timepieces — the G-Gucci watch, a re-edition of a Sixties model with a G-shaped bezel and a modern bracelet strap; the house’s first-ever digital watch whose dial displays two time zones and has a rubber strap, and a classic man’s chronograph sporting a moss green strap.

“The images featured in this campaign are some of my favorites from the Gucci archive,” said creative director Frida Giannini. “They perfectly illustrate not only the glamour of Gucci’s past and the many style icons who were naturally drawn to the house, but also show how this heritage can be relevant today.” — Alessandra Ilari

WEIGHTY ISSUES: Kourtney Kardashian is getting a lot of mileage out of her post-baby body in the world of celebrity weeklies. After the reality TV star appeared on the Feb. 1 cover of OK magazine, touched up to appear thinner than the original photo that was taken only seven days after the birth of her son, Mason, Kardashian told WWD, “They doctored and Photoshopped my body to make it look like I have already lost all the weight, which I have not.” Meanwhile, the prior issue of OK featured Kardashian posing with Kendra Wilkinson on the cover.

Now she’s back in this week’s Life & Style, and the magazine is touting its pictures of Kardashian as the “actual body after baby.” A spokeswoman said the photos have not been altered. “Losing the weight has been a lot harder than I thought,” Kardashian told the magazine. “I’ve lost 25 pounds so far. I still have 15 more to go.” So will this finally be the last of the Kardashian weight loss stories? That all depends on the newsstand sales. The new issue of Life & Style is out today. — Amy Wicks

OLYMPIC SPORT: Have Rodarte’s Kate and Laura Mulleavy set their eyes on activewear? Not quite, but The New York Times Magazine recently turned to the ethereal sisters to wardrobe several U.S. athletes participating in the Winter Olympics in Vancouver, which begin Feb. 12. The Ryan McGinley portfolio, due out in the magazine this Sunday, features 13 Olympians training in custom-made Rodarte knit garments, including figure skater Johnny Weir in mid-axel sporting a full crochet knit jumpsuit. Other Olympians in the story, which McGinley shot on location during training sessions across the U.S., include figure skater Evan Lysacek, Rachael Flatt, and pairs skaters Keauna McLaughlin and Rockne Brubaker; freestyle skiers Jeret “Speedy” Peterson, Hannah Kearney and Emily Cook; snowboarders Hannah Teter and Kelly Clark, and ski jumper Anders Johnson.

“It was quite different for each athlete and each sport,” the designers said through their spokesman, Brian Phillips, via e-mail. “We built the looks knowing that the athletes needed to be able to keep the same range of motion in our clothing as they have in their normal uniform.” — Marc Karimzadeh

ENVELOPE, PLEASE: Fashion has never met an awards ceremony it didn’t wholeheartedly embrace — take the CFDAs or the Accessories Council Excellence Awards, which last year counted Lady Gaga as an attendee. This bodes well for the latest entrant to the circuit: the Fashion 2.0 Social Media Awards, established by the blogging network Style Coalition in partnership with sample-sale Web site ideeli to celebrate “fashion brands that have really embraced the online space,” according to Yuli Ziv, one of the Coalition’s founding members. “Last year was a turning point for many fashion brands to embrace social media, more closely connect with their fan base and establish valuable brand extensions,” Ziv said. “These nominees epitomize those values and are paving the way for others in the fashion industry.”

Diane von Furstenberg, Chanel, Burberry and Alexander McQueen are among the nominees in the seven award categories, which include Top Innovator, Best Online Video, Best Twitter Account, Best Facebook Page and Best Web Site. To come up with the nominees, Ziv and her colleagues surveyed more than 1,000 people — mostly bloggers and people active in fashion-related social networking on sites such as Twitter and Facebook. People can cast their votes on the Style Coalition and ideeli Web sites through Monday night. The winners will be revealed on Feb. 10 during an awards ceremony cohosted by Lucky magazine at W New York-The Tuscany hotel.

Consider DKNY, nominated for Best Twitter Account, a crowd favorite. Billed on her Twitter page as “well-placed fashion source bringing you behind-the-scenes scoop from inside Donna Karan New York & DKNY and my life as a PR girl living in NY,” DKNY has gained fans — more than 17,300 followers at press time — thanks to her witty, honest and always-harried tweets about everything from her attempts to dress celebs for the Golden Globes (and, facing failure, finding solace in food) to her own weekend adventures (“Going to a bday dinner at a casual Thai place. Nothing kills me more than having to dress casual on a Sat nite. If u want casual do Sunday,” read a recent tweet). — Nick Axelrod

NOT SO FAST: Reader’s Digest Association has temporarily delayed its emergence from Chapter 11, to address an issue related to the pension fund in the company’s U.K. entity. RDA’s restructuring plan was confirmed by U.S. Bankruptcy Court a few weeks ago and the company said it now expects to emerge within the next few weeks. — A.W.

BULKING UP: DailyCandy is about to enter the multibillion-dollar wedding business with a dedicated e-mail that will be sent out to its subscribers every Monday, beginning Feb. 8. The word “wedding” is already the most-typed-in search term on DailyCandy and almost one in five readers are getting hitched or helping a friend plan a wedding, a spokeswoman said. The company also sees a market-audience opportunity, given the fact that several wedding print publications, such as Elegant Bride, Modern Bride and InStyle Weddings, have recently shuttered. DailyCandy is working with Crate and Barrel on the launch.

Elsewhere in the digital universe, Glam Media said it has raised another $50 million in private equity mezzanine funding. Proceeds will be used to build a digital media technology center, expand internationally and for acquisitions. The Series E round was led by Aeris Capital. — A.W.

FOCUS ON FOOTWEAR: Sam Edelman tapped Kelly Klein to shoot his brand’s first-ever ad campaign, featuring Charlotte Kemp Muhl, paramour of Sean Lennon. Muhl appears barely clothed in the images, wearing only pair of shoes from the spring collection. “With Kelly’s photos we break the rules in contemporary fashion footwear,” said Edelman. “This campaign will open everyone’s eyes to the potential of our brand.” The images will run in InStyle, Elle, Harper’s Bazaar, Vanity Fair and Vogue. In addition, the brand’s Web site has undergone an overhaul and will relaunch in mid-February, in conjunction with the new ad campaign. — A.W.