A year after announcing an agreement to design customized helicopters with Italy's AgustaWestland, Versace unveiled its first two choppers here on Thursday. 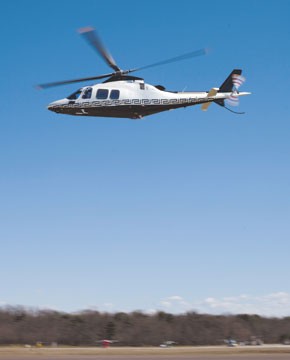 But that wasn’t the only big news out of the company on Thursday: The firm’s chairman, Santo Versace, confirmed that he is gearing up to enter the political arena with former Italian prime minister Silvio Berlusconi, who’s hoping to get back into power in next month’s election.

Santo Versace is running for Parliament as a candidate in Berlusconi’s party, Partito delle Libertà (Freedom Party), for the city of Reggio Calabria, in the southern region of Calabria, from which the Versaces hail. Versace’s election doesn’t depend on whether Berlusconi wins, but rather on the number of votes the Freedom Party score in Reggio. A socialist at heart, Versace has increasingly become more vocal on matters concerning social issues and has often urged his peers to shake up the political status quo.

As for the helicopter, it was launched in the presence of Versace chief executive officer Giancarlo Di Risio, who flew in directly from New York’s launch of the brand’s men’s wear at Barneys New York. “This is an important challenge for us, a symbol of Italian excellence, and carries us to the new frontiers of luxury — always higher,” said Di Risio.

The two owners of the helicopters chose to forgo anonymity and agreed to participate at the official ceremony organized to present the choppers at AgustaWestland’s Italian plant. Former tennis ace Ion Tiriac, one of Romania’s richest entrepreneurs, was handed the keys to his three-ton, six-seat black and white AgustaWestland “Grand,” decorated with Versace’s Greek iconic frieze motif trim on the sides and furnished with the brand’s plush leather seats.

Tiriac, who owns two other AgustaWestland choppers and regularly wears Versace, described his latest purchase as “pure class.” So much so that he said he plans to ask Versace to provide the brand’s Home designs for his next project: a 600-apartment residential site in Bucharest, Romania.

The other customer, Bruno Zago, is the founder of one of Italy’s main paper manufacturers, Pro-Gest, which counts 12 plants around the country. He took control of his AW 109 Power chopper, which has discreet gray-hued Versace interiors. “Although I use it for work reasons, I appreciate the beauty of Versace’s design,” said Zago, wearing one of the exclusive ties featuring tiny choppers put out by the company for the occasion.

Retailing upward of $5 million, the helicopters have a life of about 100,000 hours of flight, and can travel from Milan to London with one stop for fuel. Customization may include gold handles and security belts, plasma TVs and flying office facilities complete with computers and telephones.

AgustaWestland has manufacturing plants in Vergiate, an hour from Milan; Yeovil, England, and Philadelphia. With a yearly production of about 190 helicopters and sales of almost 3 billion euros, or $4.3 billion, the company provides choppers for military and civilian outlets, including Ferrari and the German publishing firm Burda.

In addition to this collaboration, Versace has linked with Techniques d’Avant Gard to personalize private planes and with Lamborghini to decorate cars. The first Versace Airbus 380 will be delivered by yearend.