Donatella Versace Has Put Cody Simpson in the Bathtub

The Australian singer, poet and competitive swimmer is the star of Versace's new men's wear campaign.

MILAN — Versace has a new face for its men’s eyewear line.

Embodying the brand’s signature sensual and fierce spirit, the pictures show Cody posing in a bathtub while wearing some of the eyewear collection’s key styles, including a new interpretation of the classic pilot shape, and an openwork frame with a futuristic appeal.

“When I was contacted by Versace I was stoked, I’ve always admired Donatella [Versace] and the iconic style of Versace. When she explained the concept of the new Versace eyewear campaign to me, I knew it was going to work immaculately,” Simpson said. “I am a competitive swimmer and I had been in heavy training before traveling to Milan. The images were shot in the water, my element. I felt comfortable and at ease during the session, and the photos reflect that. I have always known Versace for its aesthetic, and I am proud to be a part of this campaign.” 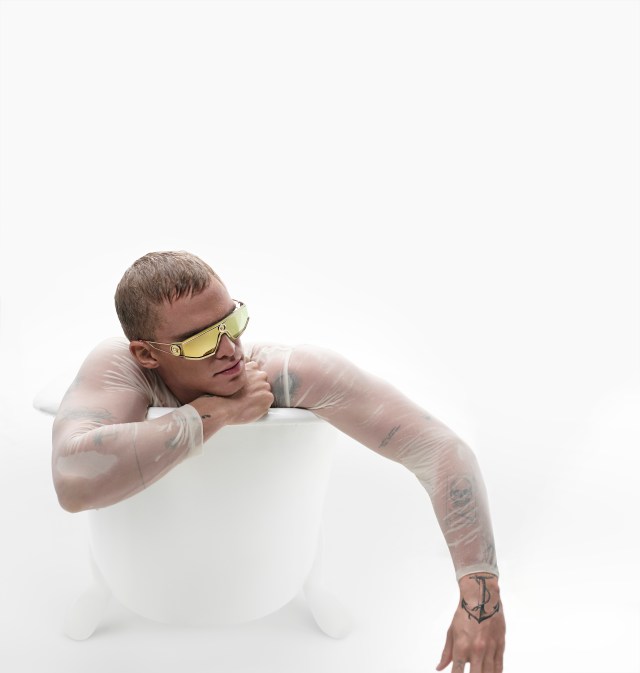 Simpson, citing the iconic sunglasses Versace created for Notorious B.I.G., praised the brand’s cool aesthetic. “What I love about Versace is that it is unapologetic. Whether you like or not, you cannot remain indifferent. This is something that, as far as I am concerned, represents my lifestyle also,” he said.

“I do what I want to do, I follow my instincts. Some time ago I published a story in which I was saying just that: my Instagram account is also a work tool, but I would never post anything I do not believe in or that it does not represent me. What I like about Versace are its many facets and that you can really mould each collection to reflect one’s personality.”

Born in Australia in 1997, Simpson, who kicked off his career as a pop singer, last year debuted his first collection of poetry, titled “Prince Neptune.” Simpson has been writing poetry since he was around eight years old, around the same time he picked up a guitar, and won his first poetry and prose contest at school when he was nine. He was 18 when he started to take poetry seriously, during what he calls his rebellious phase. He left his first record deal, moved out of his parents’ house, and set up shop in Venice Beach, spending his days surfing, playing guitar and writing. In conjunction with his poetry debut, Simpson also released two new acoustic songs.