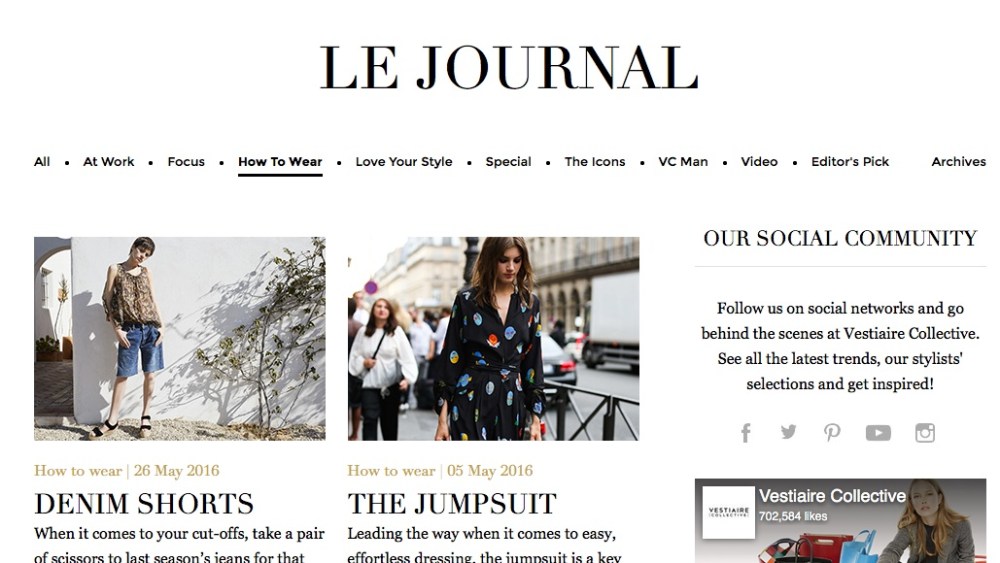 WORD POWER: Vestiaire Collective is the latest online retailer to beef up its editorial content, which it considers to be a significant sales driver while expanding into new markets and categories.

“The editorial content that you see now is just 30 percent of what you’ll see by the end of the year,” explained Sébastien Fabre, Vestiaire Collective founder and chief executive officer. “It’s a very large project for us, and it’s one of the reasons we raised money last year.”

He added the company has noted the positive impact editorial has on revenues.

In March, the European seller of pre-owned fashion hired Elvira Masson to oversee its web site’s editorial content, serving as editor in chief of Vestiaire Collective, a newly created position. The 39-year-old formerly held the same position at L’Express Styles.

“Elvira has a great sense of style, has flair and is a fantastic coordinator,” said Fabre.

Vestiaire Collective’s editorial content is found on its homepage, in its “journal” section and a newsletter that comes out twice weekly, plus other consumer-relationship-management and social-media initiatives. Masson most recently added new sections titled “At Work” and “How to Wear.”

Content live on the site includes a slide show of the 10 most stylish French girls of the moment and a feature called “Made in Scandinavia” to coincide with the launch of Vestiaire Collective in the Nordic region. For the latter, six Scandinavian bloggers, including Pernille Teisbaek and Columbine Smille, were invited to sell on the site.

Down the road, Masson plans to increase the number of fashion series by producing more shoots, bulk up editorial related to product descriptions and reinforce the lifestyle component while the site expands in to the design category. It is understood that a partnership with Condé Nast’s AD magazine is in the works.

Vestiaire Collective also collaborates with a network of fashion consultants in different markets, including Kate Foley in the U.S. and Barbara Martelo in Spain, which is meant to help gain access to the best products.

“It’s not about rags and dusty pieces. We look at second-hand pieces because we want good products,” said Fabre, explaining about 30 percent of the merchandise presented to Vestiaire Collective is rejected.

“For the resale market, it’s even more relevant to accompany the merchandise with luxury visuals and creative [editorial] angles,” continued Masson.

Fabre explained that there are already 4 million social interactions on average monthly on the site. Its customer this year is spending on average 385 euros, $427 at current exchange, versus the 335 euros, or $371, in 2015.

Vestiaire Collective logs 70 percent annual growth, according to Fabre. It operates in France, the U.S., U.K., Italy, Germany, Spain, Benelux and Scandinavia. Asia is on the radar for 2017.

As reported, Vestiaire Collective in 2015 raised funding of 33 million euros, or $36.6 million at average exchange, with Paris-based private equity firm Eurazeo being the primary investor. Condé Nast has also invested in the company over the years.

Other executive changes have been afoot at Vestiaire Collective, which this spring also tapped Odile Szabo as chief marketing officer and more recently, Kate Leary Marinaro as U.S. marketing director. They came from PriceMinister and Gilt Groupe, respectively.

Matchesfashion.com and Stylebop.com are among other e-tailers kicking their editorial content into higher gear.

Matchesfashion is to launch on Sept. 7 a revamped version of its biannual print magazine The Style Report, with an increased frequency (four times per year for both the men’s and the women’s issues) and a larger-page format.

Earlier this year, the British e-tailer introduced Digital Trunk Shows on the site, which are supported by editorial content, including short films.