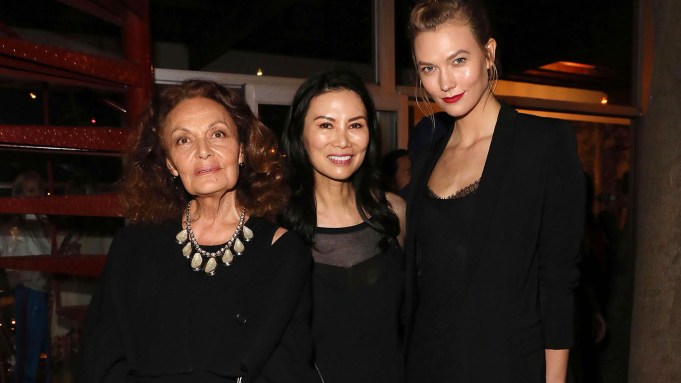 It was a sort of coming out party for Vice Media and Garage Magazine since the Brooklyn-based company bought a majority stake in the biannual art and fashion glossy last year. The party, which officially feted Garage’s new digital home and upcoming Vice channel and special-edition cover, was held at the sprawling Lower East Side open-air home of artist Izhar Patkin Tuesday night.

Although the melding and clashing of the cultures of Vice, a testosterone-fueled digital media brand, and Garage, a high-end niche title covering two of the most rarefied industries, should have been the main topic of conversation, it was the quirky venue that held the attention of guests.

Thessaly La Force, Garage editor in chief, used to hang out in the space with a friend, who worked for the artist, and the quirky, bohemian vibe of the place seemed to mirror the spirit of both media brands.

La Force took a moment before describing how the partnership has been going.

“It’s been…I guess the best way to answer it is like after working for Time Inc. or Condé Nast, it’s just so different,” she said before laughing. “I mean like Vice, it’s just this Millennial company, you know? They have a huge social [media] team and they are just very good at the Internet and there are things that are just very obvious to them. You realize we’re not at print publications.”

While that has been “awesome,” the editor who has had stints at Time Inc.’s Travel + Leisure, The Paris Review, and Condé’s Vogue.com, acknowledged a culture clash of sorts.  Referring to Garage founder Dasha Zhukova’s world, La Force said, “I don’t know how to put this delicately but it’s niche and it’s also fairly exclusive and that’s not Vice’s mentality. It’s an interesting learning curve there. I’ve enjoyed it. It has been really entertaining at moments.”

Zhukova commented on her title’s expansion: “Garage Magazine joining the Vice network has thrown open its doors to new territory from video partnerships to broadcast. The result will be a one-of-a-kind digital space — the go-to source for all new, art, architecture, fashion and design.”

Meanwhile, Vice’s chief creative officer Moretti, who was clad in a his usual black hipster hat, explained how the partnership came about. While he and his team had been fans of Garage, Zhukova became part of the Vice family after cofounder and chief executive officer Shane Smith met her at “Google camp in Sicily.”

“Larry Page [Google cofounder] does this thing where he just invites a bunch of smarty pants people to camp in Sicily every summer in August, last week of July, first week of August. I think they met there,” Moretti said.

“I thought they met in Russia,” chimed in Tom Punch, Vice’s chief commercial and creative officer. The two went back and forth before Moretti slipped into another conversation with guests nearby.

“Dasha came to us because she wanted to collaborate with a platform that engaged with younger people and had a big mobile reach, big global brand,” Punch said. “The Vice brand is very elastic right now.”

The exec explained that working with Garage and i-D, the fashion magazine the company owns, is a way for Vice to reach fashion and luxury advertisers.

“The way we see it, the luxury mind-set has shifted quite a lot,” he said. “Before we did this partnership, Chanel came to us about a year ago asking to do a big research project about what does it mean to be a Millennial who is interested in luxury today and how has that shifted in terms of 20 years ago.”

Later, actress and writer Kazan, mused about her experience working with photographers Inez and Vinoodh Matadin, who shot her for the special cover of Garage’s current issue.

“It was shot at Inez and Vinoodh’s place, which is incredible,” she said. “It’s like a bento box of beautiful rooms.…I rarely go into places and say ‘I can just live here.'”

Lena Dunham wrote a piece about her friendship with Kazan for the issue, the actress said, offering that she was “really moved that she wanted to do that.”

“She really wanted to write something. She’s so great,” Kazan said. “She’s one of the hardest working people I’ve ever met in my life, and she’s so good at her job.”