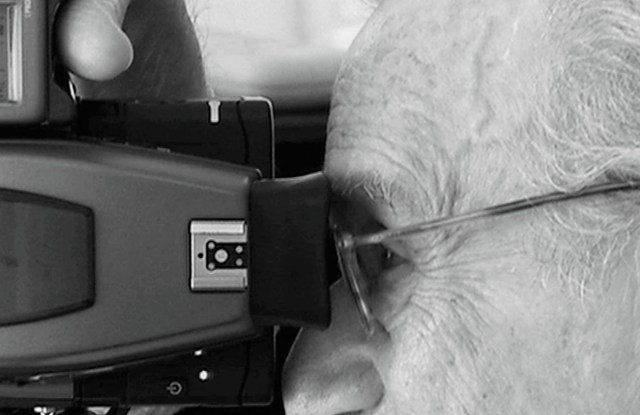 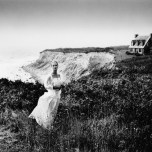 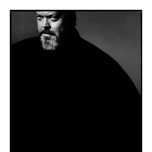 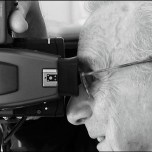 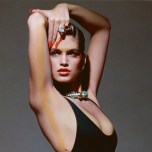 Victor Skrebneski, the fashion photographer best known for his dramatic black-and-white celebrity and advertising photography, most notably “The Estée Lauder Woman,” died Saturday at his Chicago home. He was 90 years old.

The cause of death was cancer, according to Cook County records.

Born in 1929 in Chicago, Skrebneski attended the School of the Art Institute of Chicago and the Illinois Institute of Technology. He started off painting and sculpting before making the switch to photography. He set up his own studios in Chicago in 1952. One of his first assignments was to shoot for Marshall Field’s Department Store. He got his first big break in 1962 as the exclusive photographer for Estée Lauder’s ad campaign. The world-renowned campaign launched a 15-year collaboration with model and friend, Karen Graham.

“We’ve been together since the mid-1960s,” said Leonard Lauder, chairman emeritus of Estée Lauder Cos. Inc., describing Skrebneski on Sunday. “He was always a very classy guy. He had great taste and he had the magic touch.”

Lauder said Graham would always light up when Skrebneski was around.

“With Victor, he would send the whole array of contacts. Going through Victor’s contacts was one of the greatest pleasures in my life,” said Lauder, noting that many of Skrebneski’s photographs are displayed on the walls of the Lauder offices.

Lauder also noted that they had a great team that worked with Skrebneski, that was comprised of the late June Leaman, head of creative services at Lauder, Alvin Chereskin of AC&R Advertising and himself, when he was chief executive officer. “It was the three of us, it wasn’t a committee of 20.”

Asked how best to describe what Skrebneski’s photographs depicted for Estée Lauder, he said, “Romance.”

“Not the one of a man kissing a woman, but the romance of a woman being alone in her surroundings, dreaming of other things,” Lauder said.

Ralph Lauren also used Skrebneski to photograph a few  of his campaigns.

“I met many years ago when he was shooting me for a Purple Label advertising campaign. He was already a legendary photographer then having photographed so many iconic stars. Black-and-white was his style and that’s how he shot me in our New York apartment wearing a simple black V-neck sweater and a white shirt,” Lauren said on Sunday.

“One of my favorite pictures of myself is one that he gave me that hangs outside my office. It’s artfully out of focus and very cinematic. He loved capturing a moment when people weren’t posing — the picture in-between the picture. Because he lived in Chicago, he was a regular at our restaurant there. He admired my clothes and I admired his photographs. He was both an artist and a real gentleman.”

Crawford met Skrebneski when she was 17 years old and was just starting out as a model.

“Working with Victor was one of the great privileges of my modeling career,” Crawford said. “He was my first mentor and taught me so much about the art of modeling and photography. Those years I spent on his set under the beautiful lighting being directed by a true artist, prepared me for my life in fashion, but also, his elegance and sophistication shaped by definition of a true gentleman. He will be missed.”

His closest lifelong friend, Steven Rybka, said, “Artist, Skrebneski was one of the greatest photographers, and Victor will always be my greatest friend.” 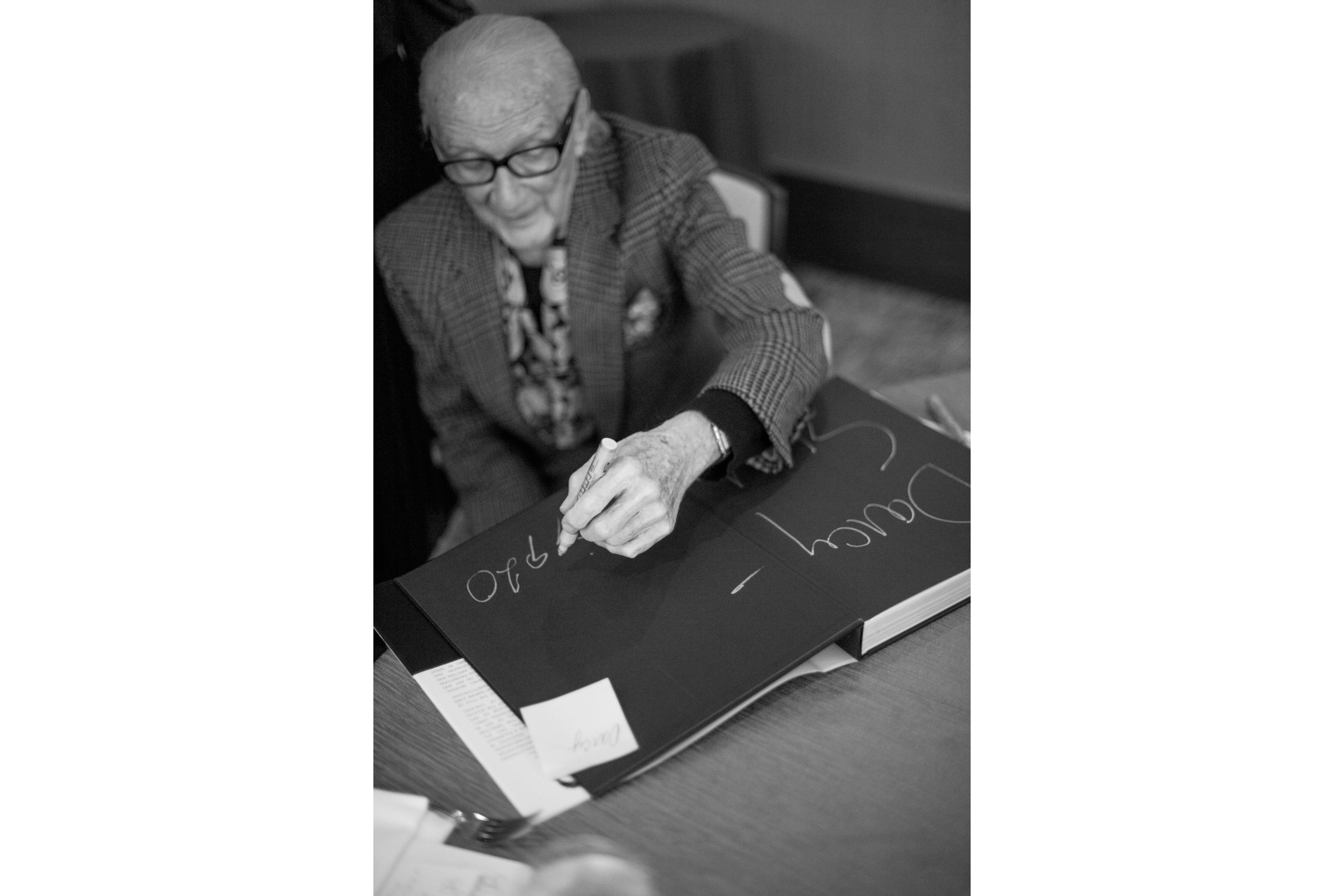 Victor Skrebneski signed copies of his latest book at an event held by Chicago Fashion Group International in December 2019.

Last December, the Fashion Group International Chicago featured Skrebneski as the guest of honor at the Ritz-Carlton. In a question-and-answer session conducted by former Saks Fifth Avenue fashion director Nena Ivon, Skrebneski charmed the audience with stories and highlights from his career, starting with his black turtlenecks sweater series, showing iconic celebrities such as Liza Minnelli, Truman Capote and Orson Welles wearing the same black turtleneck.

At a time when the world is obsessed with capturing perfect photos for Instagram, Skrebneski told the Fashion Group that he lets his camera tell the story.

“I like accidents in photographs — most kids don’t understand that,” he said. “When something happens that you don’t expect and it comes out the way I think it should, I love it. Most of my work is blurry and out of focus. That’s the way I grew up. No one told me when I was seven years old that I shouldn’t shake the camera. That was the beginning, and I liked the way it looked and I didn’t know there was any other way to look,” Skrebneski said in a WWD story.

During the event, he noted that every photograph has a story, and revealed that Bowie preferred being photographed nude. “Every picture I photographed him in, he’s naked,” Skrebneski said. “He absolutely loved being naked. He told me he didn’t know what he looked like. When he goes to everybody else’s photography studio, they dress him, they make him up, they do his hair and that’s not him, so he wanted to see how he was. I think I introduced Iman to him and did their wedding picture and they’re naked. It’s beautiful and one of my favorites.”

Skrebneski relayed a story at the event about working on a fashion shoot for Italian Vogue in Hollywood.

“They said do anything you want, just do it and send the pictures in. So I found a young model there, I think Paula Barbieri, a beautiful, beautiful girl. I don’t think the agency knew that they had her. I booked her and she came to the place we were photographing,” he said. “The Hollywood sign is in the background and then you see the Hills and she’s naked, outside, standing right off the road, she’s holding a black hat and she’s in pink shoes. That’s my idea of fashion. It’s 9:15 in the morning, when I was shooting, that’s when everyone goes to work. Cars were just backed up, but no one honks a horn, opens a window, yells or whistles. Nothing. She just stood there like if nothing was happening, which is the way all models should be.”

Skrebneski also said that day there were only three people that he didn’t get to photograph.

At the age of 90, Skrebneski published his 18th book, “Skrebneski: Documented,” which surveyed his work from 1948 to 2018. He had other books planned, including “More Skrebneski,” a design-oriented book, slated for this year, and an untitled fashion book, which was targeted for late 2021. Decisions will be made about the books at a later date.

In 2002, Skrebneski returned to Marshall Field’s to shoot their 150th anniversary campaign called “The View From State Street,” that featured cutting edge fashion juxtaposed against Field’s traditions such as the 28 Shop and Frango Mints.

In addition to Lauder and Lauren’s ad campaigns, Skrebneski also photographed for clients such as Grosvenor Furs, I. Magnin and Saks Fifth Avenue.

In 1989, the School of the Art Institute of Chicago featured an exhibit of Skrebneski’s work. A 50-year retrospective of his work was organized by The Museum of Contemporary Photography in 1999.

A private memorial will be planned at a later date.