She worked on the September issue for five months. 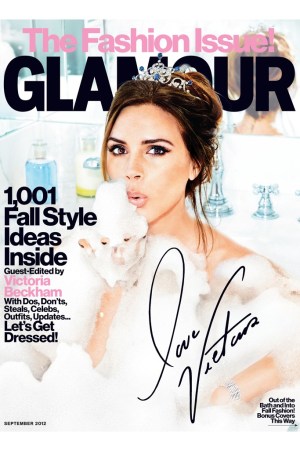 BRING IT LIKE BECKHAM: In the September issue of Glamour magazine, Victoria Beckham says she is often asked what other job she would like to do if she weren’t a fashion designer. At one time, her answer would have been ballet dancer, but now she’s settled on the role of fashion editor.

Beckham recently got to try her hand at editing — at least temporarily — when she signed on as guest editor of the issue.

Glamour editor in chief Cindi Leive said Beckham was a good choice for an issue devoted to fashion, since she is not only stylish but also knows how to design clothes.

Of course, it didn’t hurt that Glamour’s readers had already responded to Beckham in a big way. As the industry continues to struggle at newsstand, Beckham was a proven hit among the magazine’s readers. Her last cover for Glamour, in March 2010, was up 16 percent in single-copy sales over the prior year.

Beckham worked with the title for five months on a variety of well features devoted to runway-ready hairstyles styled for actress Lily Collins, a fashion story with Brit band The Wanted and a beauty section devoted to bold eye makeup.

Leive said Beckham took the task seriously and came to the table full of ideas. Typically, these celebrity “guest editor” arrangements are pretty loose, with an actress contributing an idea or two, but in this case, Leive said, Beckham was on board for early morning conference calls, layout decisions and casting.

“I wanted to put my stamp on the magazine,” said Beckham, who described herself as a control freak during the process. “They were really open to my ideas, like I wanted to show Lily with not a lot of retouching. I have a very strong vision of what I like, and it’s cool and a little more edgy.”

On the cover, Beckham was photographed wearing a tiara and ostensibly nothing else (so much for a cover credit), blowing bubbles from a bathtub. The flirty pose is part of Leive’s new cover strategy that focuses on creating a story that is anything but generic. “Our core readers have responded really well to the redesign,” she said. “We are grabbing a girl that didn’t consider herself a magazine person before — the 27-year-old who doesn’t want to see anything fake or phony.”

Since the redesign in March, single-copy sales are up 3 percent, Leive said, a fairly dramatic shift following a January issue that was down 15 percent on newsstands while February fell 38 percent. “We’re showing a sense of fun and a sense of humor,” said Leive, who also had Amanda Seyfried posing with a bright yellow phone on the March cover and a topless Lauren Conrad selling big for May.