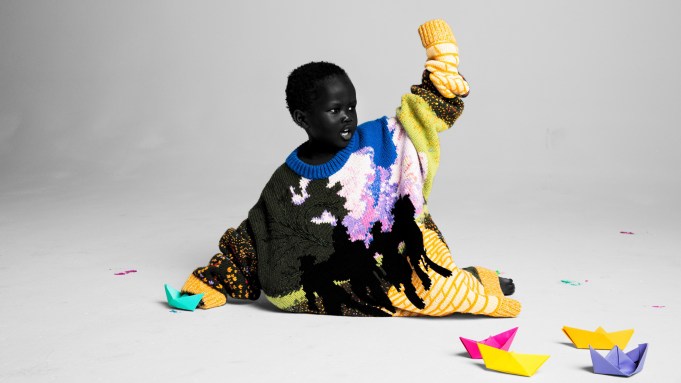 PARIS —  Virgil Abloh is not done tearing up the luxury rule book.

In his first advertising campaign as artistic director for men’s wear at Louis Vuitton, Abloh is launching a three-pronged digital push that brings in new talents — including a three-year-old toddler named Anyieth, who appears in one of the first images set to break today to coincide with Martin Luther King Jr. Day in the U.S.

The initial images are shot by Inez van Lamsweerde and Vinoodh Matadin, who previously worked with Vuitton on a 2012 ad featuring Arizona Muse. But for the next two phases, Abloh has drafted two outliers from the art world: Algerian multimedia artist Mohamed Bourouissa and Dutch photographer Raimond Wouda.

The content, too, is unexpected. Instead of focusing on product, Abloh said he wanted to illustrate the values of his debut collection, shown in June on a 650-foot-long rainbow catwalk in the Palais-Royal Garden in Paris, in front of an audience of industry insiders, celebrities and fashion school students.

“I’m not content with just designing clothes. I am more enamored with providing a premise of why my designs exist. Today it’s the context that is the punctuation on the object,” Abloh said in a statement provided exclusively to WWD, explaining his concept of campaign as manifesto.

“With the campaign, I wanted to make something that is universal and human at the core. Inclusive and dense, something that has gravity. So I decided I was going to focus the campaign on boyhood, not men’s wear. What makes men? The different stages in one’s life, from infancy all the way through teenager, adolescent, young adult to adult,” he added.

The first batch of images, and accompanying video, by Inez & Vinoodh, focus on the pre-teen and teen stages of boyhood. Anyieth is shown playing with paper boats in a too-large sweater from the “Wizard of Oz”-themed spring collection.

Child actor Leo James Davis, 7, who starred as a transgender child opposite Claire Danes in “A Kid Like Jake,” closes his eyes as he basks in a rainbow against the backdrop of a projected landscape, while 16-year-old Luke Prael, seen in the Boaz Yakin horror movie “Boarding School,” is pictured in a poppy-print jacket.

The second phase, to be released on Feb. 1, is Bourouissa’s photographic homage to a painting by Gustave Courbet which the 19th-century French painter titled “The Artist’s Studio, a real allegory summing up seven years of my artistic and moral life between 1854 and 1855.”

Represented by the Kamel Mennour gallery in Paris, Bourouissa has shown his work at the Museum of Modern Art and the Centre Pompidou in Paris. The image features Abloh taking the place of the artist in the center, flanked by members of his team, social circle and models, all wearing the collection.

The image, as well as close-ups, will appear in the only print ads for the campaign.

The third phase, set to drop on March 22, shows students dressed in the colored T-shirts that Abloh handed out to guests at his debut show. Wouda shot the images, intended as a contemporary take on the group portraits of Dutch Golden Age painting, in schools around Los Angeles.

Speaking at WWD’s Apparel and Retail CEO Summit last October, Abloh said he wanted to upend traditional notions of what a fashion campaign should be.

“So my campaign will have a dialogue against the whole industry that has traditionally used campaigns as a way to message what the campaigns are about,” he said at the time. “It’s reanalyzing the idea of what a whole campaign is and I would link that to streetwear.”

To be released on the brand’s web site and social media platforms, the ads break as Abloh’s first Vuitton designs are flying off store shelves. The collection landed in about 30 of the company’s boutiques on Jan. 18, racking up sales of $1.5 million on the first day at its flagship on Rodeo Drive in Los Angeles, according to sources.

“It was merchandised as a full collection,” Burke said, also noting that the rush came despite no dedicated marketing campaign, advertising or gifting. About 1,000 people queued up in the Japanese capital to be among the first to buy.

Crowned WWD’s Newsmaker of the Year last year, Abloh went from launching the streetwear label Off-White to heading the men’s division of the world’s biggest luxury brand within four years.