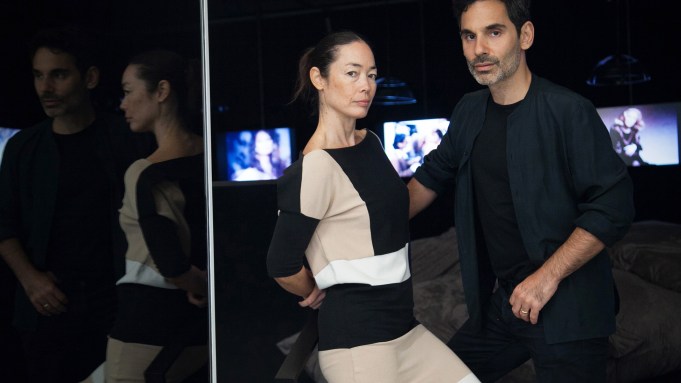 In the back of the Cadillac House, a space that serves as a hybrid showroom for high-end models of the automaker’s new cars and a sort of retail store for young CFDA-approved designers, there is an unusual installation devoted to Richard Avedon.

The videos play on 11 screens, which hang on the walls like paintings, and as one approaches, an overhead sound system gives viewers the ability to listen to testimonial-like interviews from stars such as Catherine Deneuve, who appeared in a series of Chanel No. 5 ads in 1972, or watch a young Anjelica Huston shyly speak about her mother.

“I worked with Richard Avedon the last 10 years of his life. We were really close,” Kaliardos said. “Cecilia knew him and worked with him. We were all friendly. He gave me some of his videos. He was really proud of them…We went to the Richard Avedon Foundation to see what else they had.”

At the foundation, they unearthed a trove of videos that highlighted his process of drawing out something real and memorable from young models and actors.

“These are like two separate lines of work. He had his photography, which he is most famous for. That’s what he exhibits, and that’s really what is considered his art. And he has these, which are more of his commercial work, which helped fund his artistic work,” offered James. “What we really loved so much about this work is, number one, a lot of it know it or know that he did it. But you really see that there is a connection between the two bodies of work and his process.”

Viewers can also get a glimpse of short films from 1973 commissioned by Japanese apparel brand Jun Ropé, in which Avedon stars as himself shooting models behind-the-scenes. They include frenetic, backstage look at a Lauren Hutton shoot, which includes a cameo from Pat Cleveland, for a Jean Shrimpton’s commercial, as well as Veruschka von Lehndorff’s gender-bending transformation.

The duo agreed at how “truthful” and “authentic” the commercials came out due in part to Avedon’s method of learning about the subject and talking to them for hours before he turned on the camera — something that doesn’t happen much today.

When asked why the creativity and rawness seen in Avedon’s work seems to be in the decline, Kaliardos said: “I don’t know. I think everyone just kind of sells out. Avedon took the time to do this. It’s so much more time consuming to do this than to just show up on a shoot and shoot someone running their fingers through their hair and applying lip gloss.”

James added: “I think it’s difficult now because things are so expensive and the more money that, let’s say an advertisement costs or a campaign costs, the more people will have a say in it. There are people who should be doing finances or marketing that really shouldn’t be doing creative. The creatives really should have control. I feel like it should be more of a dictatorship and be in control. When you have all these people saying, ‘we need this kind of ending, she can’t say that word, no, she’s has got to look this way,’ the whole thing gets watered down and it ceases to be authentic…market research and focus groups kills creativity.”

“We’re being run now by marketing people. What happens is someone like Avedon, he’s a true artist. It’s instinct. He knows what he wants to go after,” Kaliardos said. “It has nothing to do with dark nail polish is trending or this model is hot on Instagram. It has to do with something else. People are still talking about his work.”

The exhibit, which opens to the public from Thursday through Sept. 30, can be found at the Cadillac House on 330 Hudson Street in New York.