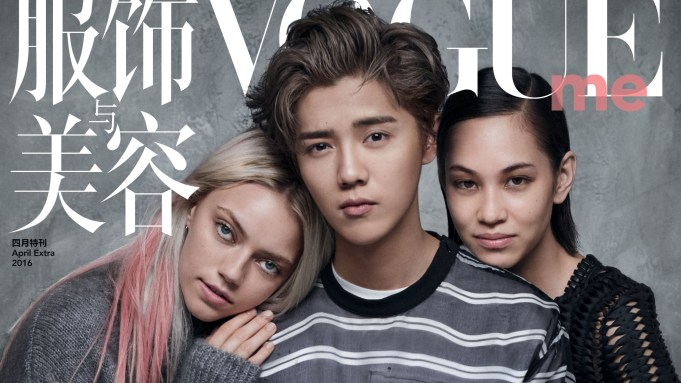 Hitting newsstands on March 28, a picture of the 260-page new glossy by Vogue China was posted on the magazine’s social media accounts and Vogue Mini app on Friday morning. WWD has also been given exclusive access to images of the first issue, featuring Chinese singer and actor Lu Han, Japanese-American model and designer Kiko Mizuhara and American actress and musician Pyper America Smith posing on the cover. The cover was shot by Boo George.

On Monday, the magazine will be available for pre-sale on Tmall, JD, Amazon and Chinese chat app, WeChat. The e-commerce sites will also offer a separate, exclusive limited-edition cover of Han, who is a former member of South Korean-Chinese boy band, Exo. Editor in chief Angelica Cheung declined to disclose how many Han covers will be available for purchase.

Cheung said Vogue Me is the first fashion magazine in China to tap the post-Nineties crowd. It was partly inspired by its Vogue Mini app that launched last year, reaching out to China’s young and “cool” generation who are, on average, 24 years old. Unlike other generations, post-Nineties kids march to the beat of their own drum and have been mostly sheltered from hardships experienced by previous generations.

“At that time, I thought, why should I do an app? [Other] magazine apps were very similar to the magazines, why bother? [Then] I thought, who would use these apps? Young people,” Cheung said, adding how her target readers were not traditional Vogue readers. The app has been downloaded by 1.7 million users and Cheung pondered the possibility of launching a separate magazine for a younger, Millennial crowd. To test, Cheung put Chinese-Canadian actor and singer Kris Wu and American model Kendall Jenner on the cover of Vogue China’s July issue last year, photographed by Mario Testino.

“The reaction [to the July issue] was really good…[we received] so many young followers. I got really encouraged,” Cheung said. Vogue China has a readership of 1.8 million and has 3.7 million followers on Sina Weibo, China’s version of Twitter. Cheung predicts Vogue Me will attract even more readers. Twenty percent of the first issue is ad pages and the cover price is 20 renminbi, or $3.09 at current exchange.

The youthful change on the July cover was not welcomed by all Vogue China readers, Cheung said, explaining how she received comments from loyal readers who didn’t understand why the magazine was tapping into a younger crowd.

“That’s when I decided, you cannot put two people in one body. Like a mother and daughter — they came from the same system but at the end of the day, daughter is daughter. Mother is mother,” Cheung said.

Speaking of the cover models, all born in the Nineties, Cheung said the three stars have a major fan base online and are dynamic in their own right, wearing many hats and dabbling in different platforms, from singing to acting to fashion design. Mizuhara made her acting debut in 2010 in the movie “Norwegian Wood” and also moonlights as a fashion designer, collaborating with Opening Ceremony in Japan, where singers Rihanna and Beyoncé have worn her designs. In a similar vein, Smith also plays in a band called The Atomics with her three model siblings. The first issue of Vogue Me also features a number of Chinese stars, including Taiwanese actress and singer Guo Caijie, also known as Amber Guo, best known for her role in the television series “The Happy Times of That Year”; actor Liu Haoran from the film “Beijing Love Story,” and actor Jiang Jinfu from the television series “The Legend of Qin.”

“A lot of people ask me: What do you think of these Chinese young idols? Are they shallow or are they kind of mindless? [I say]: ‘We don’t work with people who are not good role models. [They’re] talented, hard-working and possess positive energy. For me, that’s very important,” Cheung said, adding how she’d want to support celebrities who would be good role models for her eight-year-old daughter, Hayley.

Han is an example of that. “[Lu’s] quite talented, professional and hard-working. He’s got ambition but in a quiet, humorous way. He doesn’t go all gung ho and say things like, ‘I’m a hero.’ He’s approachable….When he talks, he’s quite conscious. He realizes and knows that he should be a good role model,” Cheung said.

As for Vogue Me’s new readers, Cheung said they are China’s target consumers.

“[Post-Nineties consumers] are quite educated and grew up in a wealthy and affluent time of China. By and large, their parents are affluent and many have traveled everywhere. They’re confident. That’s why they have opinions and are more international and sophisticated,” Cheung said.