The December issue, which hits China’s newsstands on Nov. 11, features 153 pages of beauty and trends shot exclusively for the title by Mario Testino. 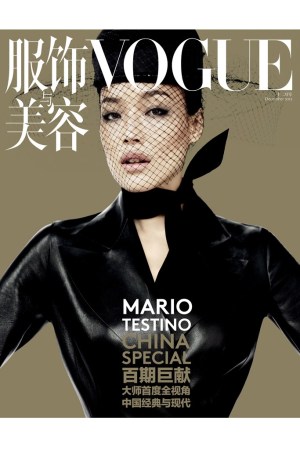 BEIJING — It has been more than eight years and 99 issues since Vogue China debuted to a fashion-hungry and potentially massive audience ready to pounce on its pages.

Now, for its 100th issue, the magazine is promising its 1.2 million readers something special: 153 pages of beauty and trends shot exclusively for Vogue China by Mario Testino.

In an interview at her office, Vogue China editor Angelica Cheung described how she and Testino met while working together on his photo exhibition in China and shoot here for American Vogue, developing a friendship in which the pair “knew we wanted to do something together, but it took a while to figure out what that should be.”

The resulting collaboration is the December issue, which hits China’s newsstands on Nov. 11. The production took months of planning but was mostly shot by Testino within one week in China, along with a few fashion stories in Los Angeles and other locations featuring Chinese models. The China-based shoots cover a spectrum of culture and fashion influences, some Cheung’s ideas, some from Testino, all very much collaborative.

In “The Grand Masters,” Testino places vibrant models alongside Chinese opera masters, featuring traditional Chinese opera’s unique costumes and makeup techniques and a study of how those bold colors and patterns are transformed into more relatable beauty.

In “A Band Apart,” which he shot in Beijing’s gritty music club Yugong Yishan, the photographer portrays the powerful influence of China’s urban young and hip, a departure for a magazine that normally displays a more aspirational look at upper echelons of fashion and style rather than street culture.

Meanwhile, “Portrait of a Lady” showcases elegant, European styling at various locations around a Beijing landmark: the Summer Palace, the holiday haven of the Qing Dynasty. The result, Cheung beams, is a shoot that could have taken place anywhere in the world. But this and all the shoots are uniquely China, with an all-Chinese cast of models.

Additionally, Chinese film star Shu Qi is featured on the cover dressed in all black, a cap and veil showing off subtle style.

“I wanted to mix all the elements that I find interesting about China — the past, the present and the future,” said Testino. “Looking to the past, I photographed five Chinese opera singers from the Peking Opera and Kunqu Opera, and inspired by their makeup and traditional costumes, I photographed a beauty story alongside this on the model Tian Yi. This was particularly exciting as when I proposed the idea of photographing the opera singers to Angelica she said it would be interesting as long as we made it relevant for today. For the audience in China, the opera singers are well known, so following Angelica’s idea, we took this and gave it a more contemporary angle through the makeup story.

“I then mixed in the modern Chinese woman who is inspired by girls in the West today who carry small dogs, and instead of giving her a dog as a pet, I gave her an alligator. When I first researched China, I was also interested in the different religions and philosophy, and I really wanted to convey the spiritual woman — so for another shoot, I depicted a woman who is in touch with her spirituality.

“The cover story was with the actress Shu Qi, and for this I wanted her to emulate a mix between Audrey Hepburn and Angelina Jolie.”

Cheung says she believes Testino is one of the first non-Chinese photographers to understand how to capture modern fashion and beauty in China in a way that speaks to Vogue China’s audience.

Too often, she said, non-Chinese photographers seem to approach the country and the people as exotic and foreign, rather than understanding how Chinese faces and looks are simply normal here. Chinese readers want beauty, not to be viewed as “others,” she explained. Testino, Cheung said, understands that fact and presents Chinese models and styling in a gorgeous way that will captivate Vogue China readers.

Testino said he loved the challenge. “This is the sixth issue of Vogue that I have done [following Spanish, French, German and two issues of Brazilian Vogue] where I have not only photographed all the editorials but worked closely with the editor to direct and define all the content and the look of the issue. I don’t really see this as a challenge, though; I love the process of collaborating, and this process is the same for me here, just on a larger, more holistic scale,” he said.

The magazine launch will be followed with a cocktail party on Nov. 12 with Testino in Beijing.

After tripling its circulation since the magazine started, Vogue China still has a long path ahead.

Cheung said it is a difficult task as China’s fashion audience grows and segments. In the beginning, Vogue was aimed at top-tier Chinese consumers and growth was inevitable.

“Growth is easy; everybody makes money in China,” Cheung said with a laugh.

The top tier has grown, but an emerging middle class, aspirational consumers and other segments of society all demand attention as well. Cheung said that when in doubt, Vogue China sticks to a message that will speak to its original core readers, but digital integration and social media have broadened the magazine’s appeal to a much wider audience. She wants to use that as a tool to educate China’s consumers about much more than clothing trends.

“China is a country that is growing and finding its path as it goes along,” said Testino. “I am curious how it will carry on developing and changing, especially with young Chinese people growing up in a more open environment than what it used to be.”