With a cadre of Insta-famous runway models gracing its March cover (and yes, Kendall Jenner and Gigi Hadid are front and center), it was easy to overlook that American Vogue made major history on Wednesday.

Seven major models, including Liu Wen, Imaan Hammam, Adwa Aboah, Vittoria Ceretti, also posed for the cover wearing matching black Prada turtlenecks and high-waisted bikini briefs, which was released on Wednesday. Most notably among them, Ashley Graham. The 29-year-old model and self-proclaimed body activist is the first plus-size model to grace the cover of the 125-year-old magazine. And while Graham herself has stated that she doesn’t like the term “plus-size”, she has been a significant influence of shaping the way fashion perceives body types that aren’t of the 5’11” size 00 variety, since her 2015 cover of Sports Illustrated’s Swimsuit issue. 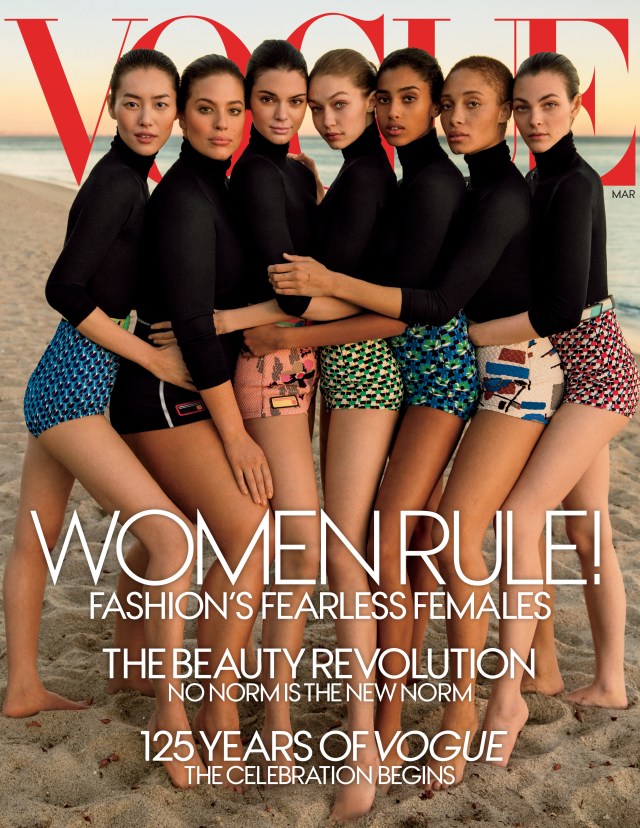 “Designers aren’t the only ones pushing fashion in an all-embracing direction, ” said Vogue writer Maya Singer in the issue’s cover story, celebrating the seven models who are “democratizing fashion.”

More from the issue, which hits newsstands on Feb. 21:

For years, Graham, 29, had been told that certain dreams were out of reach for ‘plus-size’ models like her. Landing the cover of Vogue, for example. But Graham didn’t buy it. Anointing herself a surrogate and spokesperson for the legions of full-figured women who felt unseen — and earning legions of fans in the process — she has stormed fashion’s most formidable barricade: its cult of ultra-thinness. Today, as she enters the supermodel pantheon, Graham is convinced that the industry’s skinny worship is destined for the dustbin.

But alas, no good deed goes unpunished as fans (or foes?) lashed out on social media, claiming the placement of Graham’s hand on her thigh indicated her wanting to cover up, as the other models did not. It was also suggested on social media, that Hadid’s hand extended to embrace Graham’s waist seemed a little longer than anatomically possible. Graham, never shy to voice her opinion, spoke out on the matter on her currently exploding Instagram account, saying: “I chose to pose like that…no one told me to do anything.”

As for the model’s feelings about the historic cover, it was all a “#dreamcometrue.”