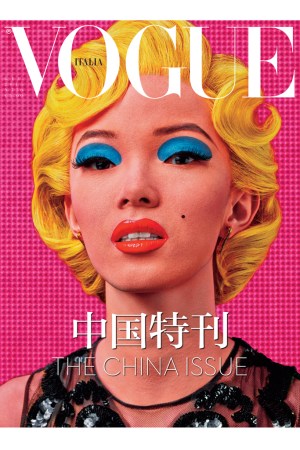 The magazine will be on newsstands Monday with four different covers photographed by Mert Alas and Marcus Piggott, Craig McDean, Steven Klein and Mario Sorrenti. This is the first time since the summer of 1988 that Steven Meisel has not shot the cover. “They are the four most important photographers of the new generation after names such as Peter Lindbergh, Bruce Weber and Mario Testino,” Franca Sozzani, editor in chief of Vogue Italia, told WWD.

“But we will continue to work with Meisel,” Sozzani added, pointing to another Vogue cover in the works that will be shot by the American photographer.

Sozzani contended that much is yet to be learned about China and that while industry observers lament a slowdown in that market, this is “a moment of regrowth.” Having traveled to China several times over the years, she remarked on the shifts in tastes, confirming Chinese customers have become more sophisticated. “It’s interesting to see how Chinese women view fashion and how they turn to Western fashion. That said, they are very proud of being Chinese. I was very surprised to see how sensual they are. We must let them have time to grow and understand [fashion]. The new generations are discovering everything now,” said Sozzani. She compared them to “Japanese women, who are more extreme in their tastes.”

In terms of articles, there is a story by movie critic and producer Marco Müller on Chinese cinema and a piece by Chinese actress Weiwei Liu. “She lives in Berlin, so she has another point of view on China’s evolution,” explained Sozzani. “We in Europe look back to our past, we are a product of it, while in China they look ahead, since a lot of the past has been destroyed. It’s more stimulating for them.”

She also noted that Vogue Italia’s issue date of June 8 is the National Day of the China Pavilion at Milan’s International Expo.

Asked about new designers in China, she said there is a certain buzz as well as a number of talents there, “but we need to give them the possibility to grow.”

Sozzani has long been a champion of supporting young designers and in the June issue she will launch the first edition of the “Who Is on Next?” talent search outside Italy. The Dubai edition, to take place in October, will reach out to the Emirates and the Gulf, but also as far as India, Africa, Malaysia and Thailand. In addition to Sozzani, the jury includes the newly installed head of the Italian Chamber of Fashion, Carlo Capasa; Raffaello Napoleone, chief executive officer of Pitti Immagine; Silvia Venturini Fendi, president of Altaroma; Federico Marchetti, ceo of Yoox Group; Christopher Bailey; Christian Louboutin; Hanneli Rupert; Salama Alabbar; Noura Binzagr, and Naomi Campbell.