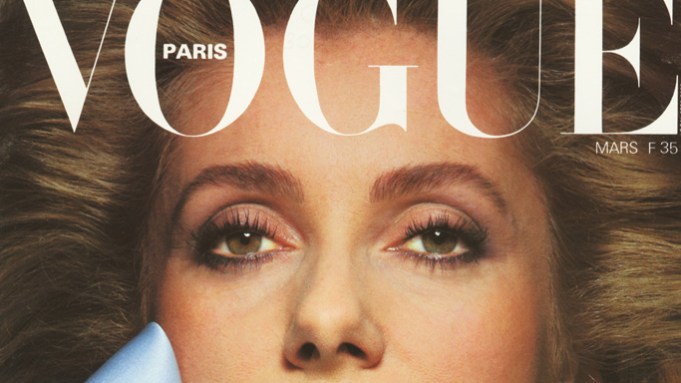 BIRTHDAY LADY: Fresh off New York Fashion Week, Emmanuelle Alt is prepping for Vogue Paris’s 95th anniversary. The magazine is to celebrate with an October collectors’ issue, a book, plus a bash on Oct. 3 during Paris Fashion Week.

“I don’t look like [95],” said Alt, who in February will mark her five years as editor in chief of the title that she joined 15 years ago. “We were first thinking the next birthday would be the 100th, but Vogue Paris’ archives is like a photography museum.”

The total print run is 220,000 copies, with the number of newsstand copies up 50 percent compared to the October issue last year. It’s priced at 5.90 euros, or $6.70 at current exchange, one euro more than the regular price. By comparison, the September issue had 378 pages.

Other celebrities billed as “legends” by the magazine shot for the issue include Catherine Deneuve (the record holder for the number of Vogue Paris covers,) Jane Birkin and Johnny Hallyday, the latter photographed by Hedi Slimane. There is also Lily Rose Depp, daughter of Johnny Depp and Vanessa Paradis, and Gabriel Kane Day Lewis, son of Daniel Day-Lewis and Isabelle Adjani, respectively. “They are legends’ children and perhaps tomorrow’s legends: Lily Rose Depp has a stellar career,” Alt explained.

Inside, there are Vogue Paris archival images including of Yves Saint Laurent, Sharon Tate, Mikhail Barysnhikov and Marisa Berenson and a feature where Italian photographer Franco Rubartelli, who produced fashion shoots in exotic places for the magazine in the Seventies, reflects on the Vogue years and his partnership with top model Veruschka. “The shoots were incredible. They involved safari jackets and body painting,” Alt mused.

In addition, the magazine is publishing a book, “Vogue Covers, 1920-2015,” in partnership with Editions Ramsay, due out Sept. 25. It compiles 140 covers of the magazine throughout its 95 years arranged by theme including “illustrations,” “the theater of fashion,” “supermodels” and “stars.” Talents behind these covers include Giorgio de Chirico, René Gruau, Georges Lepape, David Bailey, Helmut Newton, David Hockney, Guy Bourdin, Horst P. Horst, Irving Penn, Henry Clarke, Jean-Loup Sieff, Sempé, William Klein, Richard Avedon and Andy Warhol. The book will be sold in bookshops and on Vogue.fr, priced at 39 euros, or $44 at current exchange.

The Paris party will be held on Oct.3  at 51 Avenue d’Iena. It will be co-hosted by Alt and Xavier Romatet, chief executive officer of parent company Condé Nast France. Archival images chosen by Alt will be screened during the event. She wants the bash to be all about dancing. “We have an annual fundraising gala dinner with Palais Galliera during couture week. For this party, I want people to dance, sweat and come back home with their feet hurting,” she said with a laugh.

Paid circulation of Vogue Paris in France was 119,252 from July 2014 to June 2015, according to France’s Audit Bureau, down 0.9 percent compared to the same period in 2013-2014. The rest of the women’s magazine market in France logged a 4.4 percent decrease in the same period.