Royal biographers and writers share their thoughts about the California royals ahead of a much-hyped interview with Oprah Winfrey to be aired on March 7.

LONDON — British Chancellor Rishi Sunak laid out his spring budget earlier this week, but the good news about the country’s economic future, post-pandemic, was nearly eclipsed by a statement that Buckingham Palace plans to investigate allegations of bullying by Meghan Markle when she was still a working royal.

The following day, the tabloids were torn: Some opted for a “battle of the Windsors”-style front page, while others expressed joy over Sunak’s economic recovery plan.

Barring any major world events, however, there’s no doubt who will be dominating the tabloids’ front pages in the days to come.

Tensions are rocketing on this side of the Atlantic, and not just because those bullying allegations have resurfaced after more than a year. In response, Markle said she was “saddened” by the attack on her character and believes she’s the object of a smear campaign.

Anxiety levels are also building ahead of Oprah Winfrey’s interview with the Duke and Duchess of Sussex, set for Sunday. Many here are wondering whether they’re about to witness yet another cringe-making royal TV moment. 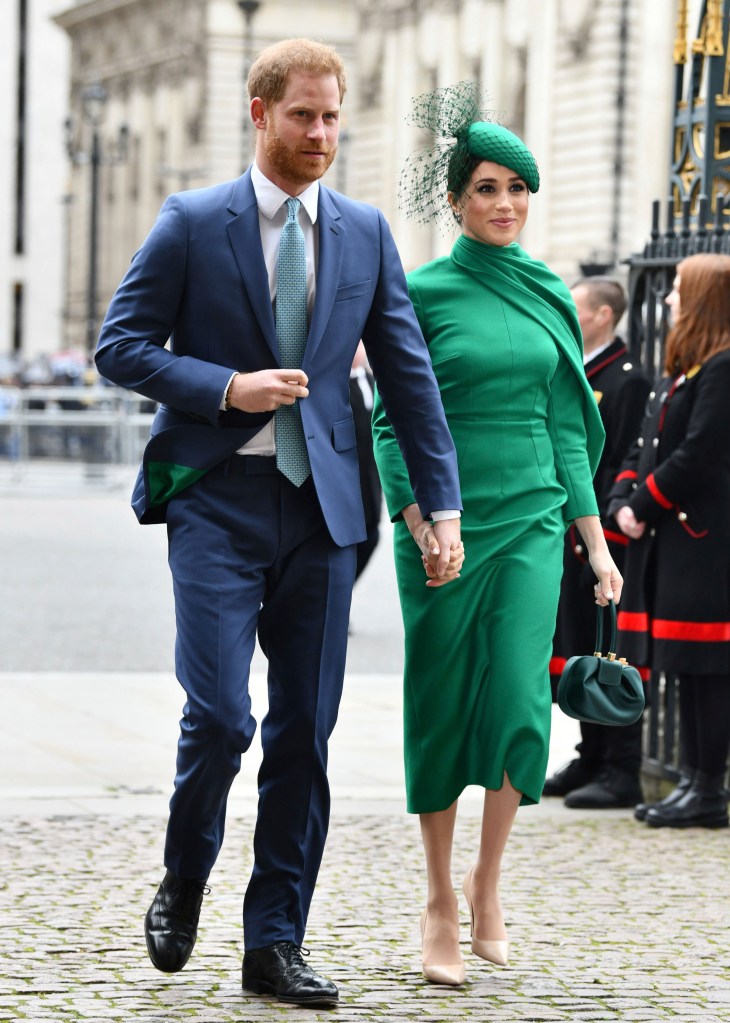 Will it be a Prince Andrew-style disaster, where the arrogant blue blood discussed his relationship with the convicted pedophile Jeffrey Epstein — and almost immediately lost his job as a working royal?

Or will it be more like Princess Diana’s 1995 landmark sit-down with the BBC’s Panorama show where she revealed the painful and intimate details of her marriage, something no royal had done before and uttered the famed line “there were three of us in this marriage”?

The question remains whether the Duke and Duchess of Sussex will end up embarrassing Queen Elizabeth, or themselves, or both?

The Queen has witnessed a groundswell of public support over the past 12 months for boosting morale during the COVID-19 pandemic, and because her 99-year-old husband, Prince Philip, has been in the hospital for the past two weeks, suffering from heart problems.

Or maybe the interview will simply just clear the air.

People are undoubtedly curious to hear what Harry and Meghan’s perceived grievances are about Britain’s most famous family, the country’s notoriously nasty press, and why they wanted to start a new life as celebrity Californians.

“It certainly looks like it might be on a par with the major, disastrous interviews of the past,” Penny Junor, who has written biographies and books on myriad members of Britain’s current royal family, including Princes William and Harry, Prince Charles, Princess Diana and the Duchess of Cornwall, said of the Sussex’s upcoming interview with Oprah.

Junor also pointed to a question that’s been playing on many peoples’ minds. She noted that the couple had repeatedly cited a desire for media privacy as their primary reason for leaving England, “but now, having left, they’ve gone and done this Oprah interview. It’s not exactly seeking privacy.”

But not all media is created equal in the eyes of the young royals. Referring to Harry’s interview with James Corden, Junor said she was “astonished” by the prince’s benign reaction to the ugly portrayal of his family in Season 4 of Netflix’s “The Crown.”

Last year, Harry and Meghan inked a multiyear Netflix deal worth a reported $100 million, so it’s no wonder he didn’t make too much fuss. “He was speaking like a bought man,” said Junor.

Anne de Courcy, who has written about 20th-century society figures, including Coco Chanel, and who penned a biography of Princess Margaret’s ex-husband Antony Armstrong-Jones, Earl of Snowdon, is expecting a mix of platitudes, psychobabble — and pontificating — in the upcoming interview. 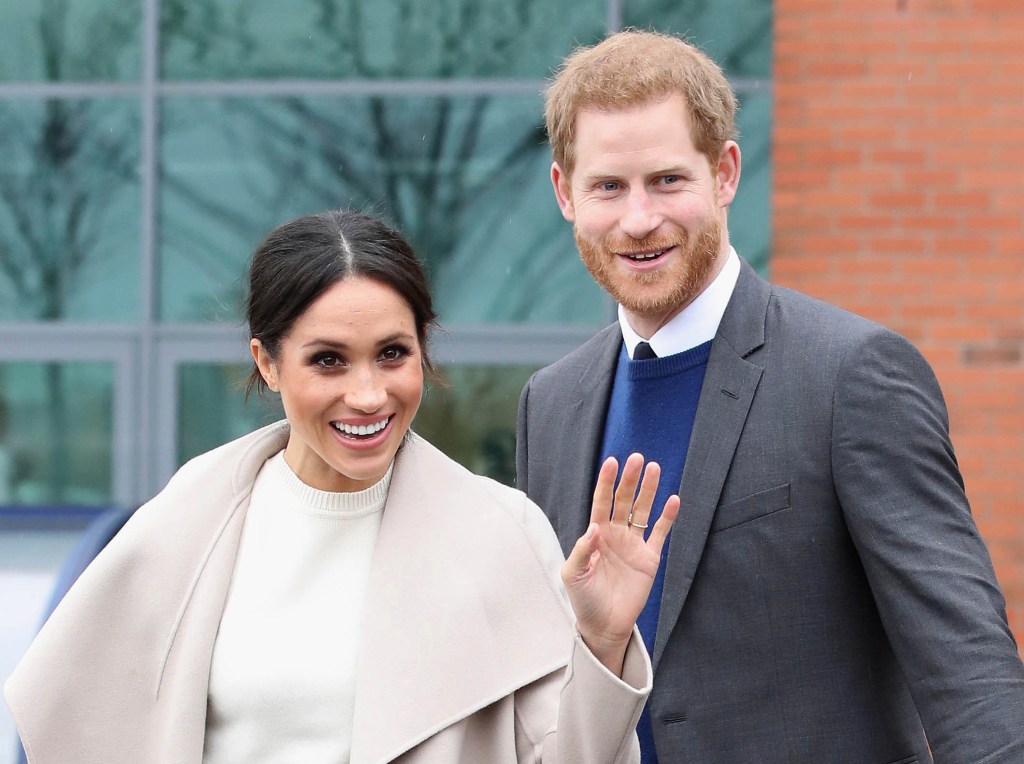 “What makes us rather laugh over here is, suddenly, they’re talking ‘Californian,’ but most of us don’t speak woke,” said de Courcy.

“Then you read what they call their ‘mission statement.’ It’s as if they’ve cut a lot of words out of a newspaper — ‘compassion,’ ‘empathy,’ ‘my journey,’ ‘systemic change’ and ‘creative activism’ — mixed them up together, thrown them in the air, and just read them out where they landed,” she added.

Like Junor, de Courcy pointed to the hypocrisy and utter lack of self-awareness to be running away from the press one minute, and then sitting down to chat with Corden and Oprah the next, or taking a photographer along to a private moment in a cemetery, as the couple did back in November.

“The one thing the British people have always hated, historically, is any form of hypocrisy. They instantly mock it. And here you have Harry and Meghan talking about privacy and then instantly going on the show of someone with the biggest global audience,” de Courcy said.

She would argue that the couple’s hypocrisy stretches farther than their love-hate relationship with the press.

“Being told to be compassionate by someone who lives in an $11 million house, who’s wearing a $4,000 dress — it doesn’t play very well,” said de Courcy, referring to a clip of the Oprah interview in which Meghan is wearing a long black Armani wrap dress, and one of Princess Diana’s diamond bracelets.

She also believes the interview should be postponed, given Prince Philip’s illness. Earlier this week, British media reported that the prince had a successful procedure for a preexisting heart condition, although he remains in the hospital.

“It’s a very bad time to have this interview go out, with the Duke of Edinburgh being in hospital. If his health should continue to deteriorate, it would rebound very unhappily on Harry,” said de Courcy, noting that Harry and his grandfather have always been close, “and, in a way, he was Harry’s mentor.”

Others believe the interview will highlight another angle in the vast and tangled royal drama, namely the loss of two precious family assets.

Anne Sebba, author of books including “That Woman: The Life of Wallis Simpson, Duchess of Windsor,” said Harry and Meghan’s pursuit of a new life away from Britain is “a great loss” for the royal family. 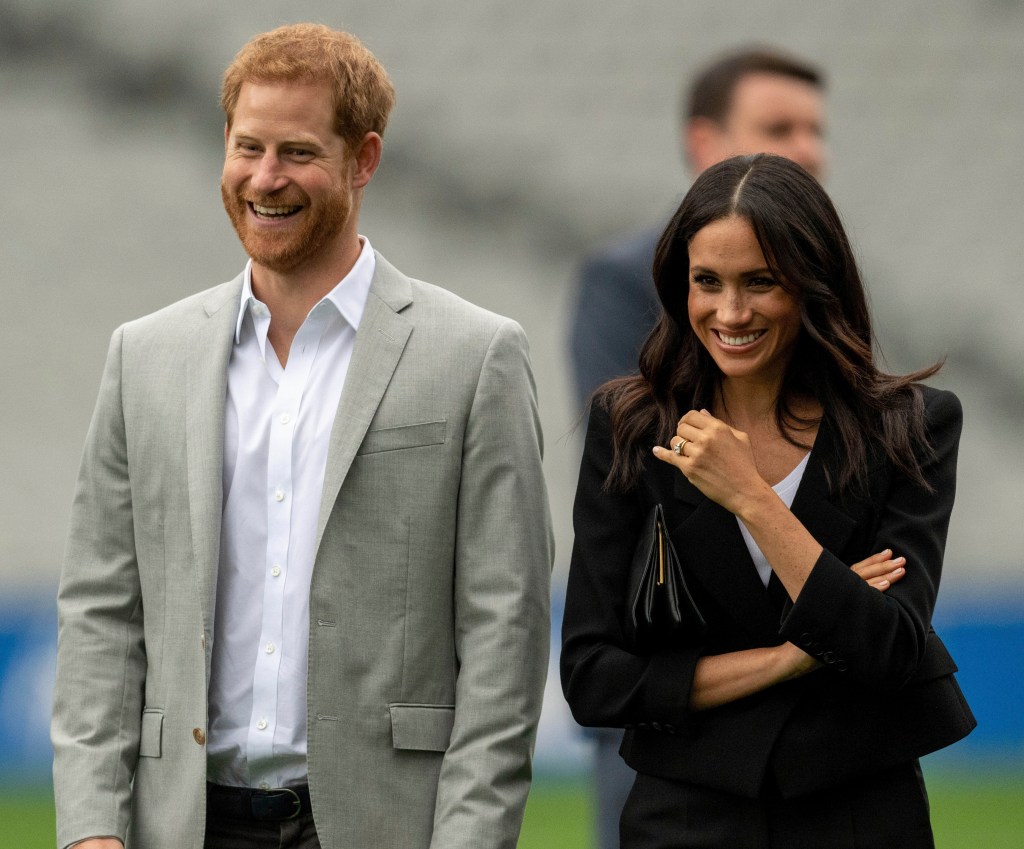 “It’s a great, great shame that a way wasn’t found to incorporate an alternative vision of Meghan and Harry, of using what they had to offer, because I think they represented a breath of fresh air. I think they could have brought in a different aspect to the monarchy,” said Sebba.

She said she understands the couple’s reasons for leaving royal life. “I think this is a decision that Harry has taken to protect Meghan from the enormous effects that he felt destroyed his mother. He just saw a repetition of history, wanted to protect her and hoped there could be some halfway, but I don’t think he thought it through adequately. And everyone is blaming Meghan.”

Sebba said people feel real sympathy toward Harry, who has always had a difficult relationship with the press and blames them for the death of Princess Diana. “They think of that picture of him as a child walking behind his mother’s [funeral] cortege. And there is a desire to cut him some slack.”

Hugo Vickers, the author of biographies of Wallis Simpson, Queen Elizabeth, the Queen Mother, and other 20th-century cultural and society figures, said he sees the couple’s move to America as a squandered opportunity, rather than a lost one.

“The media has been pretty bloody to the Queen and Prince Charles and others over the years, but they don’t go rushing and winging away to California; they remain steadfast and get along with the job, which usually pays off in the long run,” said Vickers.

On top of that, criticism of Meghan in the British press has been nowhere near as nasty as some of the abuse suffered by her fellow royals, the Duchess of Cambridge in particular, or by celebrities such as Stella McCartney or Victoria Beckham. It’s called tall poppy syndrome. When anyone is perceived as getting too “big,” they’re instantly cut down.

Vickers added that Harry may live to regret his decision to step back from royal duties, adding that when he looks at pictures of the Duke of Windsor as an old man, he sees a sad person.

“He’s [the late duke] absolutely miserable. Usually it’s better to do your duty, but also you can work within the system instead of working outside it,” said Vickers, adding that Harry and Meghan could have focused on their official roles as head of the Queen’s Commonwealth Trust.

The Commonwealth is a voluntary association of more than 50 countries with historic ties to the British empire, although any country can join. The Queen stripped Harry and Meghan of their official patronages and roles once the couple confirmed they’d no longer be working royals.

Asked how they see the royal drama playing out once the Oprah interview is over and the couple settles into their new life, the writers laid out a variety of scenarios.

“They won’t come regularly back to England,” said Sebba. “They’ll become exiled royals, and they’ll have the good sense to make a life and money for themselves.”

Sebba believes the media hype will abate, too. “Of course it will. Harry and Meghan will always be of interest, but not in this all-consuming way. We’re so interested now because we’re prurient, aren’t we? But what story will they have to tell once they have their lives in California? I don’t see [the hype] playing out for much longer,” Sebba said.

De Courcy thinks Harry will most likely get bored. “I hope they will be happy, but I personally wonder how Harry will fill his days. I would have thought his great problems would be boredom.”

She also noted, like the others, that the army had been his lifeblood, and leaving it must have been tough.

“Harry was never happier than when he was in the army. He was a very good solider — he simply loved it, and he regarded the army as a family. But the one thing you do not do as a soldier is step away from your duty. It’s at the heart of what you do, duty and loyalty. So he must be feeling rather unhappy at having done that,” de Courcy said.

Vickers believes that Harry will end up back in England, with the royal family. He envisions Meghan ending up with an oligarch, and Harry returning with his tail gripped between his legs. He also pointed out that the Queen, all along, “has been extremely generous to Prince Harry and has kept the door open” for the couple’s return to the royal fold.

“They’re being very much nicer to him than the previous generation was to the Duke of Windsor,” said Vickers.

Junor believes the couple may well be setting a template for future generations of second children, or “spares” to the heirs. “It has always been very difficult for spares historically. There is no role for them,” she said.

“On the one hand they are royal, so they cannot just live like ordinary people. Princess Margaret had difficulty with that, and so did Prince Andrew, and in some ways I think what Harry and Meghan are doing is a kind of blueprint for future generations of spares.

“I’m not suggesting they’ll all go to California and sign deals with Netflix, but they should not cause a crisis if they do not want to be working members of the royal family.”