Alexandra Shulman and the team at British Vogue have come up with a whole pile of gowns for the wedding-themed May issue. 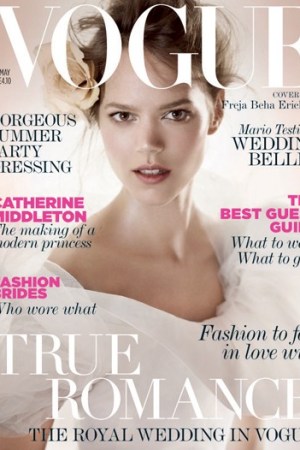 WHITE-OUT: Instead of fixating on the wedding dress — like so much of the British press — Alexandra Shulman and the team at British Vogue have come up with a whole pile of gowns for the wedding-themed May issue, which hit newsstands Thursday.

The magazine has three covers, with models wearing dresses by Vivienne Westwood, Bruce Oldfield and Oscar de la Renta — all shot by Mario Testino. Inside, there are even more bridal confections — by Alberta Ferretti, Dior Couture and Elie Saab.

There is no doubt, however, that royal wedding watchers will be scrutinizing Shulman’s covers. The British press reported that bride-to-be Kate Middleton consulted Shulman — and others — about her sartorial options for the big day. “I can’t really comment about that,” said Shulman.

For the covers, Shulman said she made it a point to call in a lot of dresses. “I wanted to remove the question of who would be designing the dress, and I wanted a range of British and non-British designers,” she said. The cover choices, she said, were the prettiest dresses.

As for the significance of Middleton’s dress, Shulman said people in Britain will read a lot into its design. “There will be the semiology of the dress: Will it be traditional or fashion? Big and optimistic, or pared down for our times?”

THE BENEFIT OF HINDSIGHT: Condé Nast Traveler contributing editor Bob Payne, writing in the magazine’s April issue, shared “15 Best Places to See Right Now” with readers. Number 10: Libya. The 250-word blurb proclaims “a door long shut is open again,” and ends with a recommendation to fly Lufthansa from New York’s JFK via Frankfurt to Tripoli, which has since been shrouded in a NATO-imposed no-fly zone.

“It’s a lead-time situation,” explained editor in chief Klara Glowczewska last week. “Libya exploded two days after we went to press.” The issue shipped on February 15. Ten days later, forces loyal to Colonel Gadhafi fired on protesters in Tripoli, and Libya’s ambassador to the United Nations, Abdurrahman Shalgham, compared his country’s leader to Pol Pot and Hitler. Editors appended a note to the story online saying, “Unfortunately, after this article went to press for our print edition, that door unexpectedly closed again for obvious reasons. It is our hope that it will open again soon.”

“This has happened to us several times recently,” said Glowczewska. “We had a feature story with a cover line on Egypt that went to press about two weeks before the revolution happened.” The February cover touted “Egypt, Secret Pleasures of the Nile.” Glowczewska is addressing the hazards of sending a travel magazine to press in her editor’s note for the June issue.

“Our readers are a fairly adventurous bunch,” said Glowczewska, who has never visited the North African nation in her travels. “We always try to offer them new and interesting places to think about, and Libya just seemed very interesting,” she continued. Among Payne’s other recommendations for readers to visit: Sri Lanka, Oman, Mexico, Mozambique, the Maldives and Brooklyn.

Traveler was nominated on Tuesday for a General Excellence ASME for the ninth time, an award it’s won twice before. The magazine was down 5 percent in ad pages for the first quarter of 2011, according to numbers released by the Publishers’ Information Bureau last week.